Allan Barber says SFF needs to bed down its new shareholding, take advantage of its improved balance sheet, and convince its suppliers to stay with it

Allan Barber says SFF needs to bed down its new shareholding, take advantage of its improved balance sheet, and convince its suppliers to stay with it 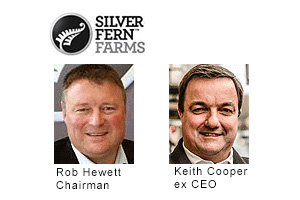 In recent weeks there has been an exchange of views about PPCS’s acrimonious takeover of Richmond in 2003.

Keith Cooper, ex CEO of the renamed Silver Fern Farms, emerged from anonymity in Middlemarch to castigate the appointment of Sam Robinson to the board of Silver Fern Farms as the Shanghai Maling representative. He was critical of Richmond’s rejection of the original approach by PPCS to buy the Freesia Investments shares from the Meat Board in the mid-1990s and Robinson’s role as Richmond’s chairman.

Farmer, SFF shareholder and columnist Steve Wyn-Harris took Keith to task on the grounds of selective memory of what actually happened during the bitter but ultimately successful campaign by PPCS to buy Richmond. I must confess my recollection of events, without being in any way personally involved, is closer to Steve’s perspective than Keith’s and I still remember clearly Ron Clarke’s superb last column on the topic just before he died which was an eloquent attack on what he considered PPCS’s underhand approach. At the time Justice William Young referred to the company’s “gross commercial misconduct.”

Wyn-Harris’ made a telling point about the price finally paid for the shares which more than doubled about the near disastrous impact of the takeover on the combined company’s business and therefore financial performance during the following decade. The combination of the high takeover price and the subsequent loss of business from disaffected Richmond suppliers led irrevocably to the search for a new major shareholder and the deal with Shanghai Maling.

The latest annual three year moving average EU and US quota figuresare compelling evidence of why this was necessary. The news for SFF based on its declining sheep meat market share is particularly dire, whereas the company has largely maintained its beef market share over the period.

A look back at the 2006 figures provides a telling perspective on how processing volumes and market shares have moved over a ten-year period, although the market shares at the time of the takeover in 2002 paint an even starker picture. Sheep meat provides a much starker illustration of changing market supply patterns than beef.

SFF has been by far the biggest sheep meat loser, falling from almost 33% share including Frasertown Meats in 2006 to 22% in 2016 with a further reduction of quota entitlement for 2017, equivalent to a loss of over 26,000 tonnes or 35% of its 2006 figure. I assume the latest single year would paint an even worse picture than the three-year average. Conversely its deep south competitor Alliance has largely maintained its position over the same period. The largest beneficiaries of SFF’s reduced share have been ANZCO whose entitlement more than doubled, Ovation, up by 43% and AFFCO, up nearly 40%.

Greenlea and Alliance have made the biggest beef gains during the 10 years, with increases of 53% and 42% respectively, while ANZCO and UBP have also gained solid ground. SFF lost a small amount of share, although with the Wallace Meats volume added to the 2006 figures the volume loss amounts to 10,000 tonnes. Of the other big players, AFFCO has largely stood still between 2006 and 2016, although it had lost both volume and share in the intervening years before recovering the losses.

This analysis demonstrates a degree of fluidity in farmers’ supply patterns, but provides no conclusive evidence of any desire for a particular ownership structure, whether cooperative or privately owned. If there is an obvious conclusion it must be that the meat processing sector has shown itself to be totally unsuited to publicly listed ownership, as demonstrated by the positive impact on AFFCO of Talleys’ ownership and investment since that family-owned company bought out the other shareholders and de-listed.

The other conclusion is the enormous damage to customer or supplier relations that can be caused by a hostile takeover with the added fallout of straitened financial resources leading to lack of investment in ageing assets and resultant loss of a competitive cost structure. There can be no doubt Richmond suppliers defected from PPCS then SFF in the North Island after the change of ownership, while gains by Talleys owned South Pacific Meats and CMP in the South Island have hit SFF’s volumes there as well. At the same time Alliance has been able to protect its market share, although there have as yet been no signs of actual gain.

SFF’s latest published annual result for the 2016 year confirms the evidence of its lower revenue and declining share of quota. In contrast to 2015 when the company made a pre-tax operating profit of $61.6 million on turnover of $2.45 billion, the latest year produced a $7.3 million loss on turnover 11.6% or nearly $300 million lower. In comparison Alliance’s result, while not brilliant, was profitable and an improvement on the previous year.

Regardless of whether Cooper’s fears Shanghai Maling may remove SFF’s head office from Dunedin are justified, the more pressing need is for SFF to bed down its new shareholding structure, take advantage of its dramatically improved balance sheet and above all convince its suppliers to stay with it. Evidence at present suggests this last challenge will prove the hardest of all to achieve.

On a completely different topic, over Auckland Anniversary Weekend the Warkworth A&P Show celebrates its 150th anniversary which is a momentous achievement of which as Chairman I am enormously proud. Everybody associated with the show is keeping fingers crossed for a fine weekend and relatively free flowing traffic on SH1 to ensure everybody can get there to enjoy the occasion.