Export prices for logs delivered to NZ ports in May increased by an average of $4 per JASm3 from April prices. This increase in At Wharf Gate (AWG) prices is due to an unexpected slight increase in CFR sale prices in China, combined with a weaker NZD relative to the USD. Ocean freight costs have remained steady. Due to both strong export and domestic prices the PF Olsen Log Price Index for May 2017 has risen to a record $127. (See PF Olsen Log Price Index below). The average sale price is $16 per tonne above the three year average.

There is strong demand for good quality pruned and structural logs. The NZ structural mills have manged to increase lumber prices for domestic sales a couple of times in 2017 and still maintain solid demand. The lumber market in Australia has softened for a variety of reasons. Their housing starts are down, there have been weather interruptions and some poor grade recoveries. Demand from the Asian markets has remained strong for NZ sellers, even allowing for increased supply from Russian mills. The NZ mills have benefited by the weakening NZD against the USD.

Long may this boring period last!. Most exporters were recently able to increase CFR prices in China due to Chinese concerns about low weather related April log production in NZ. C3 handle port operations for approximately 2/3rds of NZ’s export logs and Matt Wakelin (Central Region Manager) estimates that in the two rain affected weeks in April cart-in was down by about 20% around the country.

Pacific Forest Products (PFP) report that China daily offtake is around 60,000m3 per day and that the market remains well-balanced with total log inventory at 3.02 mill m3 and stable.  Inventory is forecast to continue to slowly deplete over the next few months. The Chinese authorities will reduce the import VAT on log imports from 13% down to 11% from 1 July.  Their reasoning is that with the reduced domestic harvest they need to encourage higher volumes of log imports to help satisfy demand.  This is another positive sign for the future of log exports to China from NZ. As well as putting another backstop behind current market pricing, this is evidence of a positive sentiment in China from central government towards importers and end-users of NZ logs. 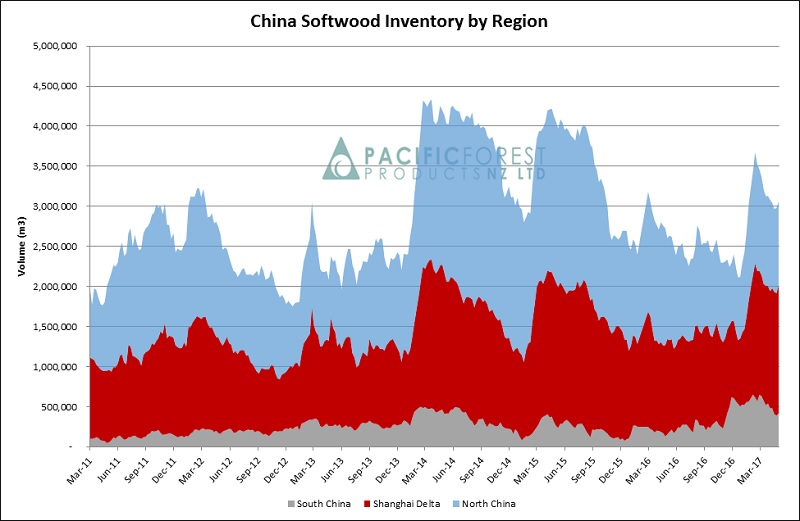 There are signs of recovery in the Indian log market after their currency demonetization, and this market is approaching stability and approaching parity with China prices. Interestingly, the Indian government added 9.1 million new taxpayers in 2016-2017, which is an 80% increase over the typical yearly rise. Allowing for deaths and retirements etc this means total taxpayers increased about 4.1 million. The Indian government has a target to increase the tax base to 100 million taxpayers from the current 65 million individuals. This is expected to significantly boost the government’s tax revenue. If some of this revenue was to be spent in infrastructure this would increase demand for logs.

The ocean freight prices have now plateaued after rising from high teens in February to low-mid USD 20’s in April. The increased demand for freight outlined in the March Wood Matters has reduced and the balance between available tonnage and demand has improved. Bunker costs have reduced by about 10% to $300/t due to oil price falls. Weight factors will increase as we move into the winter months placing a small upward pressure on shipping costs.

The NZD relative to the USD has recently remained in the 0.69-0.70 range, even dipping below 0.69 occasionally. 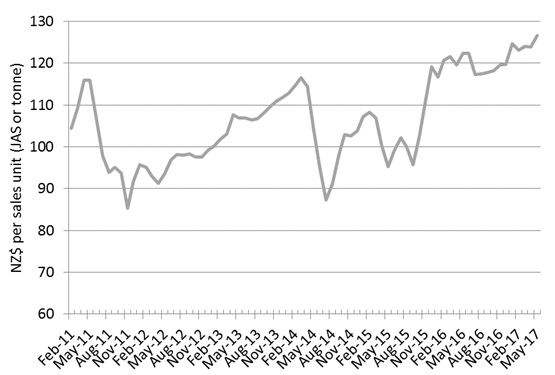