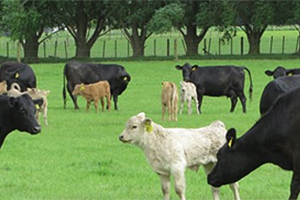 For well over 20 years one of the largest challenges in the meat industry has been dairy farmers’ lack of recognition of the opportunity to make more money from their calves by selling them to calf rearers for beef production.

There have always been calf rearers willing to stick their neck out and buy calves, but this was highly dependent on both beef and milk price.

But for dairy farmers it was easier to select their replacement heifers and put the rest on the bobby calf truck, rather than find rearers to take the bull calves or keep them on the farm for up to three months.

The importance of dairy beef has been inevitable ever since the dairy industry started to increase in size at the expense of the sheep and beef industry which was forced to retreat further up the hillside to land unsuitable for other farming types. 70% of cattle born in New Zealand are born on the dairy farm and dairy cows now outnumber beef cows by about five to one which makes it essential to encourage the dairy industry to assume a significant role in breeding replacement beef cattle.

Dairy and beef enjoy a neat symmetry, illustrated by the fact the meat industry has the capacity to process dairy cows when they have reached the end of their productive life, so it makes logical sense for the dairy industry to repay the compliment. The American and now global demand for lean beef for hamburgers has resulted in a highly profitable market for manufacturing cows and bulls; increasingly the required volume of prime steer and heifer has to be supplemented by dairy cross cattle.

What has not been recognised until now is the value to the dairy industry of planned beef breeding from the bottom quartile of the dairy herd.

Admittedly the beef industry hasn’t done a good job of selling the idea there was a good profit to be made from surplus calves from cows inseminated by a beef bull, normally a Hereford which would sire white faced calves from the tail end of the herd. Nor was there much enthusiasm from dairy farmers for whom there wasn’t any major incentive to step outside their comfort zone. It was left to the calf rearers to decide there was enough margin and persuade dairy farmers to keep larger bull calves for sale or until they were up to weight. But now LIC is determined to promote a planned AI programme as an essential part of all their dairy members’ breeding policy.

The change in attitude and practice has begun to come about as a result of the Dairy Beef Integration Programme, a research project conducted over five years by AgResearch and funded by B+LNZ Mid-Northern Farmer Council with assistance from LIC and Ezicalve proven Hereford sires. The final report was published in October and there has been an encouraging 60% plus annual increase in the number of dairy farmers ordering beef straws from LIC to artificially inseminate their poorer quality cows from the start. CRV Ambreed also reports higher offtake, having sold as many beef straws by the end of June as they had sold 10 weeks later in 2016.

As with all changes of practice, success doesn’t happen overnight and there is still a fairly small proportion of dairy farmers willing to do much more than put out an old bull to mop up the tail end of the cows. The integration programme demonstrates the real financial benefit of conducting a planned insemination programme from the beginning using proven beef sires with a guaranteed short gestation period. Using these bulls means several days longer milking, consequently more milk in the vat, with added value also from the sale of the calf for rearing. In contrast to a four-day old bobby calf worth $30, a good dairy beef cross calf can with certainty command at least $150 up to as much as $275, which adds several thousand dollars to a dairy farmer’s bottom line.

Armed with the Integration Programme report, LIC’s General Manager New Zealand Markets, Malcolm Ellis, persuaded his board in September how critical it was to increase dairy herd productivity by some means other than higher numbers, because the industry appears to have reached peak dairy cow population from an environmental perspective. He was able to demonstrate the vast benefit of separating the bottom end of the herd at the start of the breeding season for artificial insemination by proven beef sires – there is a gap of 160kg of milk solids production between the top and bottom quartile. It may be necessary to extend the breeding period by 10 days to achieve the desired number of replacements, but it ensures lower quality cows aren’t kept in the herd beyond their peak productivity and consequently applies selection pressure to lift the rate of genetic gain.

Therefore, the Dairy Beef Integration Programme, designed to solve a problem for the beef industry, initially seemed to offer less benefit to the dairy industry, although the rise in the beef schedule has made the value proposition more significant. What appears to have been less anticipated is the massive potential advantage to the dairy industry of making it possible to increase productivity without increasing herd size. Common sense dictates close cooperation between the two sectors is now of equal value to both.