Steady domestic demand contrasts with rising US demand, and analysts divided on next direction in China. India now pays the same as China although volume has slipped

Steady domestic demand contrasts with rising US demand, and analysts divided on next direction in China. India now pays the same as China although volume has slipped 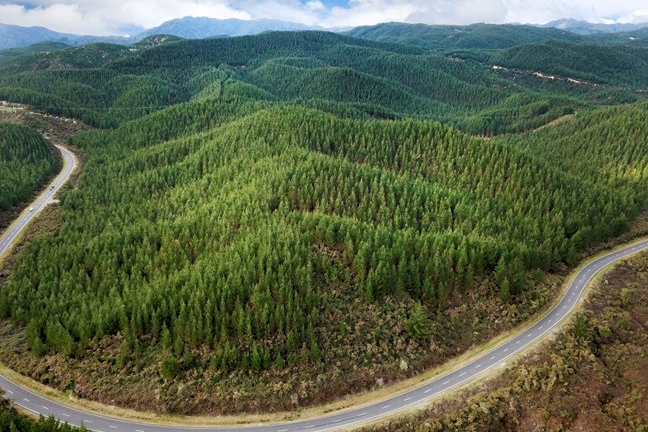 July’s At-Wharf-Gate (AWG) prices for logs delivered to ports around New Zealand are relatively unchanged from June prices. However, some exporters have strategically changed some prices of various grades and lengths, but the overall average price remains unchanged.

There has been the usual seasonal slow-down in log demand as the weather heats up in China and log stocks have recently risen by an average of 50,000m3 per week to a current level of 3.7Mm3. Some log exporters are concerned the falling stock market and the weakening Chinese currency is denting confidence in the Chinese construction industry, but other log exporters are not so pessimistic on the Chinese log market.

The domestic market is still relatively flat for structural sawn timber and there are a few mills around the country reducing production slightly by undertaking maintenance etc. Sales of clear-wood timber are still relatively strong, with stable domestic demand and very strong demand from export markets.

The PF Olsen Log Price Index remained at $132 for July. While prices for pruned logs decreased in a couple of regions around the country, this was balanced by an increase in sale prices for structural logs, as well as pulp logs in the central North Island. The index is currently $11 above the three-year average.

Mills report that their markets are the same as last month with good demand for clear-wood sawn timber. Domestic demand has been steady and export markets have been very stable with increasing demand due to strong construction figures in both Europe and the USA. Some mills are actually oversupplied with pruned logs and are having to limit log supply, as many forest managers have scheduled winter harvesting in the flatter blocks with easier access that tend to be pruned.

The domestic demand for structural timber is still flat. Actual housing starts in New Zealand seem to be about 20% behind consents granted. Market commentators aren’t too sure of the reason(s) why this is the case. Many mills in NZ aren’t “busting a gut” with production and some are taking extra days off for worker rotation and maintenance etc.

Overseas, the prices for lumber in Maine, USA have doubled in the last six months. The US construction industry has rebounded with pent up demand for new houses and renovations after the recession and rebuilds and renovations required after recent hurricanes and other weather events that require. This surge in demand has coincided with a restricted supply of lumber. This restricted supply is caused by a combination of some significant forest fires in western Canada last year that caused some mills to close for two months, the trade dispute between the United States and Canada, and a shortage of railcars and trucks to move the product.

The European Organisation of the Sawmill Industry (EOS) held its Summer General Assembly in Oslo in June. Their softwood sawn-wood markets were in general described as ‘rosy’ due to healthy construction in Europe and lively demand from importers with the two main markets being the US and China. Collectively their main concerns were around log supply (Sound similar to NZ?). This lack of raw supply is even more pronounced for hardwood mills as hardwood logs are exported to China. (As an example, in 2013 the EU exported 200,000m3 of oak logs to China, and in 2017 exported 600,000m3). These factors indicate there is unlikely to be any significant increase in production and export to countries to which NZ sawmills export sawn timber. European sawmills actually see a window of opportunity to supply the US.

Exporters of NZ sawn timber have not yet seen any reduction in demand from China due to the weakening of the Chinese Yuan (CNY). The chart below shows the deprecation of the CNY against the YSD over the last month.

The NZD has also weakened against the USD and this has provided some relief to NZ exporters as they contend with increased container shipping costs that were mentioned in last month’s Wood Matters market update. 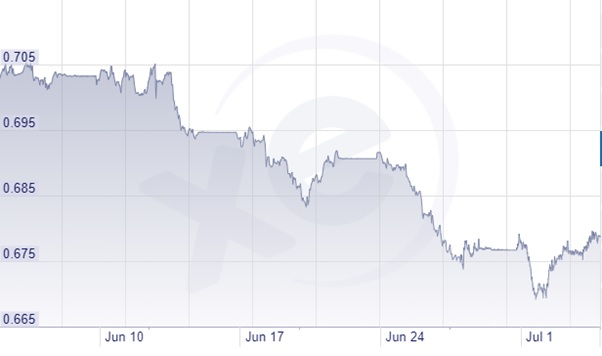 The destination of sawn timber exported from NZ is graphed below. 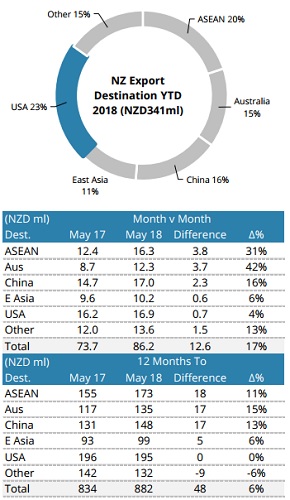 Log exporters maintained prices they paid for logs delivered to NZ ports in July. The sales prices in China are relatively unchanged from last month. The weakening of the NZD against the USD has offset an increase in shipping costs. The total inventory of softwood log stocks in China has risen by 50,000m3 per week recently and now sits at approximately 3.7Mm3. The supply from South America has slowed down due to some quality issues and the price gap between the NZ pine and the South American pine has widened.

There is usually a slow-down in log consumption in China as the temperatures increase. Average daily port offtake through June was 75,000m3 whilst April/May was 85,000m3 with peaks at 100,000m3. Exporters are divided on whether we are seeing the seasonal change or a deeper shift in log demand.

Log exporters have signalled a concern over China for two reasons.

The Indian log market has reached price parity with the China market with A longs now selling for USD 159-160/JASm3. While volumes delivered to this market are 14% down year on year to May 2018, it has been a steady market and exporters still expect an increase in demand in Q4. There is an increased schedule of ship arrivals from NZ over the next six weeks, so this will be a good test of this market. Containers of logs are also arriving from Germany, South Africa and southern yellow pine from  the USA. The labour shortage mentioned in previous Wood Matters continues, but some labour has returned to the mills from agricultural work. Log stocks are about 120,000m3 in Kandla and 30,000m3 in Tuticorin. The cash flow of log buyers is still tight after the introduction of GST and the increased scrutiny on bank lending compounding the weakening of the Indian Rupee against the US Dollar. 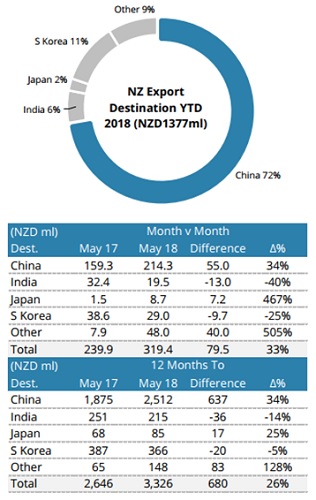 Ocean freight shipping costs for NZ log exporters have increased by 10% over the last month. Currently it is hard to get ocean freight to China for less than $30 USD/JASm3. Most exporters do not see these rates dropping over the next couple of months. As you can see in the charts below the Brent Oil Price has risen as have the bunker prices. 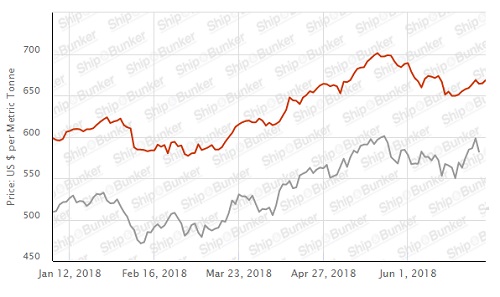 The Baltic Dry Index (BDI) is a composite of three sub-indices, each covering a different carrier size: Capesize (40%), Panamax (30%), and Supramax (30%). It displays the average USD hire paid per day across 20 ocean shipping routes. Whilst most of the NZ log trade is shipped in handy size vessels, this segment is strongly influenced by the BDI.

The graph below shows the BDI continues to increase. 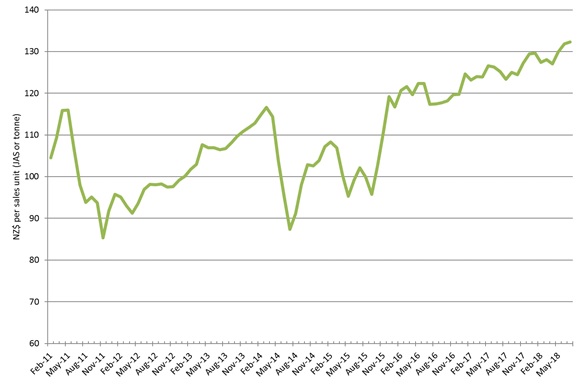