In a sign of these COVID times, the government's bond issuance has ramped up dramatically but the interest to be paid on the borrowing hasn't

In a sign of these COVID times, the government's bond issuance has ramped up dramatically but the interest to be paid on the borrowing hasn't 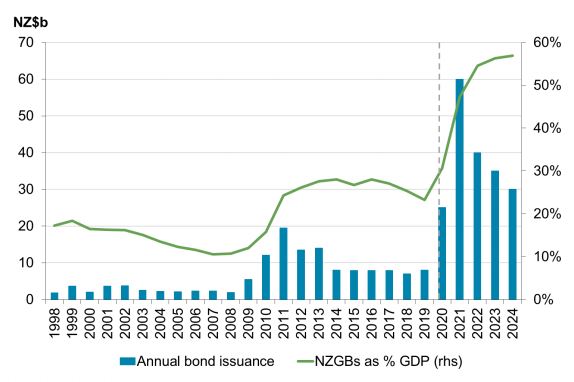 In a dramatic sign of the COVID times, the government's interest bill for new debt issued so far this year is almost $21 million less than it was for all of 2018. And that's even though it has borrowed almost four times as much money so far in 2020 as it did in all of 2018.

The government has borrowed $32.6 billion though 75 bond tenders and bond syndications in 2020 to date. It is paying an average interest rate on that borrowing of 0.745% with total interest costs of about $242.841 million.

In all of 2018 the government borrowed $8.65 billion through 41 bond tenders and syndications. The average interest rate on the 2018 borrowing was 3.048%, with a full-year interest bill of about $263.687 million. Last year the government borrowed $9.7 billion via 45 bond tenders and syndications, paying just over $156 million of interest at an average interest rate of 1.609%.

Like many governments around the world, the New Zealand government has ramped up borrowing this year as it strives to cushion the fallout from the COVID-19 pandemic. By September 4, for example, $13.9 billion had been paid out on the Wage Subsidy Scheme which at its height in May was supporting about 1.65 million jobs. This is happening in an environment of super low interest rates, meaning the cost of servicing debt is also low.

The major player in the government debt market at the moment is the Reserve Bank, even though it's not buying bonds directly off Treasury's New Zealand Debt Management unit.

Through its Large Scale Asset Programme Programme (LSAP), or quantitative easing, the Reserve Bank is buying nominal New Zealand government bonds (NZGB), Local Government Funding Agency Bonds, and New Zealand Government Inflation-Indexed Bonds from market participants in the secondary market. It's currently planning to buy up to a maximum of $100 billion worth by June 2022, and could own around 60% of the outstanding New Zealand Government Bonds on issue.

At the time of August's Monetary Policy Statement the Reserve Bank had bought about $23 billion worth, equivalent to about 23% of outstanding supply at that point. The total has since risen to almost $31 billion. Alongside an Official Cash Rate of just 0.25%, the Reserve Bank says the LSAP has contributed to lower interest rates across the economy.

"Overall, we estimate that banks’ new funding costs have fallen by around 80 basis points in 2020. Mortgage rates and deposit rates have declined since the May [Monetary Policy] Statement, with mortgage rates now 75-110 basis points lower than in January. Lower interest rates have also contributed to the New Zealand dollar exchange rate being lower than otherwise, supporting export earnings," the Reserve Bank said in August.

Meanwhile the Crown Settlement Account, an account provided by the Reserve Bank for the government to use to deposit surplus funds into, rose to $23.8 billion at the end of August. That's a fresh high, topping the $19.9 billion it reached in July.

Low interest rates aren’t a central bank providing accommodation, they are instead its worst nightmare being shoved right back in their face. Well, our worst nightmare because for one thing despite repeated failures, rates that never rise testifying to that failure, central bankers are never held to account. Link

In the middle of March, for example, while GFC2 was raging all around, the collateral bottleneck obvious to everyone except central bankers and members of the mainstream media, Treasury conducted a 10-year auction in which 5% of all bids were accepted at or below 8 bps, competing with T-bills; a feat, by the way, that was repeated in April.

Again, if there were “too many” of these bonds then we’d see the high yield rather than the low moving out and away from the range. At times – such as late last year or during 2018’s landmine – there’s an even larger bid, an obviously one, where buyers are lining up to pay extraordinary premiums in order to get their hands on the most liquid, on-the-run issues.Link

The Treasury has today announced that NZ$7.0 billion of nominal 15 May 2024 New Zealand Government Bonds have been issued via syndication.

In the textbook everyone uses, lower is always better where interest rates are concerned. It is the central basis by which all of this madness continues. We hear it over and over, the lie repeated ceaselessly by officials and then regurgitated by the financial media which betrays the decency of its audience swallowing it and repackaging it for them wholesale.

It is refreshing to see that I am not the only one perceiving the current settings and behaviors promoted by the RBNZ (and other Central Banks) as utter madness.

Very interesting article indeed. Quite different to what the RBNZ would have us believe.
I think you should be sending some of these references to them (even though they, most likely, would not be receptive to any of this, in their delusional thinking).
Their hope of solving real economy issues with monetary solutions has not worked in Europe and has not worked in Japan. It is delusional to hope that a similar approach may work in NZ.

soon we may have negative rates due to the world debt mountain,

The last time I checked, financial market pricing in NZ for early 2021 has already shifted to a 100% chance of a cut, with a slightly negative OCR.
So you may say that it is already happening.

I have nothing to fear but inflation

Not a rosy picture

Delusion of free money that never leads to inflation.
RBNZ keeping government debt cheap and cutting mortgage rates for punters.
Who will complain ?
Certainly no one with cheaper debt.
Until the inflation arrives and they have the Devils choice of raising rates to stop it, or cutting real wages via the inflation.

Exactly right. Many are rejoicing about the ever lower interest rates, while being completely unaware that inflation is going to wreak havoc on the purchasing power of their salaries/income.
The more sophisticated investors will be able to take appropriate action by investing in more inflation-resilient asset classes, while most of others, and definitely the more vulnerable and less sophisticated, and the risk-averse, will see their savings and purchasing power progressively eroded.

By the way, I can't see the RBNZ ever being willing to raise interest rates again, as this would pop the housing Ponzi bubble.

The most likely scenario is going to be that of a minority of investors and businesses being able to benefit from this, while the majority will be punished by increasing inflation.
This is not going to happen for a while (I understand that QE by itself does not necessarily have a significant immediate impact on inflation); extremely low inflation or even deflation in the short term is a distinct possibility. However I can see inflation looming at the horizon as a medium term prospect, once things normalize and the RBNZ find itself in the position of not being able to unwind any of its actions.

Correct me if I wrong folks, all QE does is swap NZGB for reserve collateral for the commercial banks that have accounts at the RBNZ. These reserves boost capital ratios. Therefore, unless these reserves are be used to lend a monumental amount, I am not seeing inflation in the current environment . What am I missing?

You are correct. These purchases will have the effect of boasting the m1 money supply. It is the broad or m3 money supply that drives inflation. If there is a collapse in the ratio of m3 to m1 money then there will not necessarily be an effect on inflation.

What drives the m3 supply is supply & demand factors.

Thanks for that explanation.

I mean I don't think can kicking is the issue here. What is the issue is that the government thinks it can solve "real economy" issues with "monetary" solutions. They are going to be sorely disappointed. "monetary solutions" are useful when faced with a financial crisis. Further good monetary policy is helpful in keeping confidence up in the business sector etc.
I have a feeling that chunks of NZ's real economy is going to start to wither away over the next year. No amount of monetary stimulis will be able to resolve this problem.

Don't forget about the effect of savings on the money supply, money saved will not lead to inflation as it is not being spent. There are really only two destinies for money, it will either be taxed away or it will be saved. An explanation here. http://www.matchesinthedark.uk/spending-chains-sankey-diagrams/

or it will be "stolen" in an OBR event

well ,,, ~~~ .. interesting interest. I suppose interest rates would be reflective of the time value of money in relation to both consumer's instant and delayed gratification impulses.

Combining such a thought with the commodification of money into currency, bond and credit forms, reflected upon at current interest rates .. renders a projection .. a projection arguably realized at present:

It's more advantageous to borrow than save? Money is near worthless? People are willing to exchange goods&services for something worthless?

Sounds all a bit bizarre aye? Think of it like this; there is currently no time value to money. There is technically [as in financial indicators, not school-boy 'technically'] no benefit to delayed spending.

Well, as a reward for getting through that convolution, here's a thought. As you know money is said to have the following characteristics; durability, portability, divisibility, uniformity, limited supply, acceptability.

I'd add *Accuracy* .. Money is a Measuring Stick. The stick [global perspective] is currently warped at best.

If any one other than the RBNZ or the government manipulated interest rates so their interest bills were reduced they would be in jail for life. Its time the public made it quite clear that governments are not elected to game the system. Vote them all out onto the dole where they belong.

National will do nothing to address the problem, but have already stated willingness to exacerbate it.

By all I meant all politicians of every party. I concur both main parties are faces of the same book.