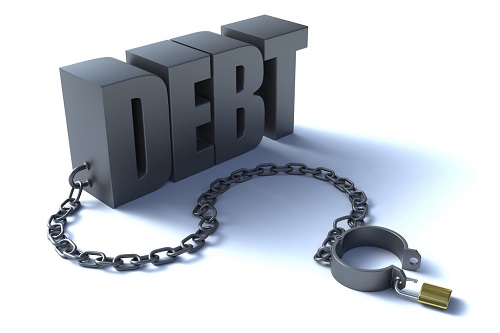 The ratio of household debt to income has hit a fresh record high and the debt mountain doesn't look like reducing any time soon.

New key household financial statistics from the Reserve Bank for the three months to the end of March show that household debt is now at a record high of 163% of disposable income, up from 162% as of December.

For the year to the end of March household disposable income was $151.155 billion, versus $246.246 billion of financial liabilities.

With the RBNZ's earlier released Sector Credit figures for April showing that the the total amounts owned on housing mortgages alone rose by nearly $1.8 billion in that month, the ratio of debt to income is likely to keep blowing out in the foreseeable future.

Ironically, however, as the debt pile continues to grow it is, for the moment, becoming more easy to service due to the low interest rates.

The RBNZ figures show that in the year to March the total amount of financial liabilities increased by over $16 billion, or 7.2% and yet during the 12 month period the amounts of interest required to be paid on a quarterly basis actually dropped by 3.9%.

Go back to March 2015 and the amount of interest paid represented 9.6% of of quarterly disposable income.

So, the amount owed is rising fast - but the ability to service the debt is improving as the effect of interest rate declines in the past 12 months continues to feed through to lower mortgage rates.

If you go back to the tail end of the last housing boom, the quarterly debt servicing ratio peaked at 14.2% of disposable income in September 2008.

This means at the moment there's plenty of room for that total indebtedness to rise by much more yet before there are any signs of stress on mortgage holders.

However, and this is what worries the RBNZ, once the current historically low interest rates do eventually give way to higher rates again, those debt servicing figures will start to blow out pretty quickly.

The RBNZ is expected to announce new minimum deposit requirements for residential property investors soon, while the introduction of debt to income ratios a little later on is also under active consideration.

Just remember this ratio is calculated over all households - roughly 1/3rd of which don't have a mortgage.

So ratio for those with a mortgage is 50% higher !

Easy to say the basis is internationally comparable but this is a classic lack of segmentation exercise.
In any shakeout - those without a mortgage are unaffected assuming they get to keep their job.

Anyway you cut it - these ratios are in the extreme sector and deteriorating.

What could tip this over ? - To Quote Anthony Eden " Events old boy - Events"

JB the numbers are likely worse. Say 62 % own , 38 percent rent , extrapolating from last census. Of the households that own , including those by trust, about 43 percent own without mortgage. So 57 percent of households that 'own ' house have mortgage, about 530000 households nationwide . Obviously Auckland figures are worse with much lower home ownership and carrying two thirds of New Zealands mortgage debt. Of course this does not assign the rental properties mortgages which are most likely substantially held by those that 'own' their own home.

This means at the moment there's plenty of room for that total indebtedness to rise by much more yet before there are any signs of stress on mortgage holders.

I imagine our fate is tied up with that enveloping Australia and the outlook there is not considered rosy in the opinion of some decision makers.

A fund manager who predicted before most economists that the Reserve Bank of Australia would cut its benchmark below 2 percent, says there’s a risk that the Aussie dollar could almost halve to an unprecedented 40 U.S. cents, a level significantly below where most forecasters see the currency. Read more

Our foreign wholesale lenders would not look to establish a lower lending rate structure if the NZD/USD currency pair collapsed, irrespective of possible RBNZ actions. They currently account for approximately 21 % of NZ bank funding. Read more

If a country has high levels of Private sector debt.. ( More than 150% of GDP ) ..AND... if private sector debt has grown by 18% over the previous 5 yrs....THEN... the probability of some kind of crisis happening is quite high ..

Credit growth...well in excess of GDP growth .... is problematic.
If we have learnt anything from the GFC... it is that..
The next economic Disaster is a great book.... Author argues that it is excessive private sector credit growth that leads to financial crises ..
https://www.amazon.com/Next-Economic-Disaster-Coming-Avoid-ebook/dp/B00L...

I'm guessing The Reserve Bank knows all this.... and is reluctant to see lower interest rates in the face of ,still strong ,credit growth..???

Author argues that it is excessive private sector credit growth that leads to financial crises ..

Some claim there is not much else.

Today global money is largely private credit money, the issue of a profit-seeking bank that promises ultimate payment in public money which is the issue of some state, quite possibly a different state from the one where the bank is chartered and does its business. Global money is also largely dollar-denominated, even when the ultimate users of that money lie completely outside the United States. The issue of dollar-denominated US Treasury bonds is just part of the huge stock of dollar assets and liabilities; the stuff of dollar hegemony is the private credit money dollar, not the issue of the state. Read more and more

I wonder how much the zero % interest transfers on Credit cards is affecting these figures. Anyone with a large limit on their credit card would be taking advantage of it, at the same time having a similar amount on deposit (hopefully).

Why don't they put the interest rates up for people buying houses, and keep them low for businesses (which I presume is why they put them down to begin with)? Low interest rates are fueling this for multiple reasons. One reason is because mum and dads are getting nothing on bank deposits, so are buying houses. First home buyers and other buyers are spending the most they can afford to borrow and repay back. Raising interest rates should help both of these.

Raising interest rates makes house buyers with outstanding loans upset. They might then vote for somebody else.
But house buyers are also voters.
You get what you pay for.