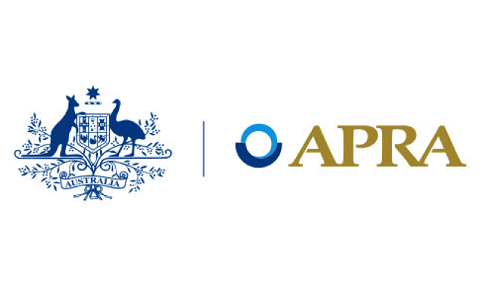 The banks are required to meet the new CET1 requirement by January 1, 2020.

This shouldn't prove too onerous for them to achieve. At March 31 the ANZ Banking Group was  at 10.1%, ASB's parent the Commonwealth Bank of Australia was at 9.6%, BNZ's parent National Australia Bank was at 10.11%, and the Westpac Banking Corporation was at 9.97%.

Credit rating agency Moody's said that, in aggregate, the increased capital requirement equates to about A$9.1 billion, compared to the four banks' normalised annual internal capital generation of between A$6.5 billion and A$7.5 billion. And Fitch said the four banks should be able to meet the requirements comfortably through internal capital generation and existing dividend re-investment programmes. S&P Global Ratings said, "We consider that the four major Australian banks should be able to meet the increased regulatory capital requirements through a combination of dividend cuts, dividend reinvestment plans, or capital raising without any significant challenges."

APRA has also released an Information Paper outlining the prudential regulator's conclusions with respect to the quantum and timing of capital increases that will be required for Australian ADIs to achieve unquestionably strong capital ratios.

• The four major Australian banks need to have CET1 capital ratios of at least 10.5 per cent to meet the ‘unquestionably strong’ benchmark

• For other ADIs, the effective increase in capital requirements to meet the ‘unquestionably strong’ benchmark will be around 50 basis points

The Australian Prudential Regulation Authority (APRA) today announced its assessment on the additional capital required for the Australian banking sector to have capital ratios that are considered ‘unquestionably strong’.

The 2014 Financial System Inquiry (FSI) endorsed the benefits of a strong and well capitalised banking system and recommended that APRA set capital standards such that capital ratios of authorised deposit-taking institutions (ADIs) are ‘unquestionably strong’. The Australian Government subsequently endorsed this recommendation.

The FSI’s endorsement of the benefits of a strongly capitalised banking system recognised Australia’s reliance on foreign borrowings, the need to ensure that Australia’s financial system continues to provide its core economic functions, even in times of stress, and the benefits that flow from reducing the perception of an implicit government guarantee and the associated economic inefficiency this creates.

APRA has today released an Information Paper which outlines APRA’s conclusions with respect to the quantum and timing of capital increases that will be required for Australian ADIs to achieve unquestionably strong capital ratios. The analysis draws on international comparisons, as suggested by the FSI, as well as other information that allows capital strength to be viewed from different perspectives.

In its assessment, APRA has focussed on the appropriate calibration of Common Equity Tier 1 (CET1) capital requirements, recognising that CET1 is the highest quality capital and therefore most likely to engender confidence in an ADI’s financial strength.

APRA has distinguished in its analysis between those ADIs using the more conservative standardised approach to capital adequacy, and those banks that are accredited to use internal models to determine their capital requirements.

This calibration recognises that ADIs using the IRB approach are currently operating with a higher capital surplus above regulatory minimums, in anticipation of APRA’s implementation of the FSI’s recommendation. APRA therefore expects that some of the increase in minimum requirements might be met through the surplus these ADIs hold in excess of minimum regulatory requirements. In the case of the four major Australian banks, APRA expects that the increased capital requirements will translate into the need for an increase in CET1 capital ratios, on average, of around 100 basis points above their December 2016 levels. In broad terms, that equates to a benchmark CET1 capital ratio, under the current capital adequacy framework, of at least 10.5 per cent. 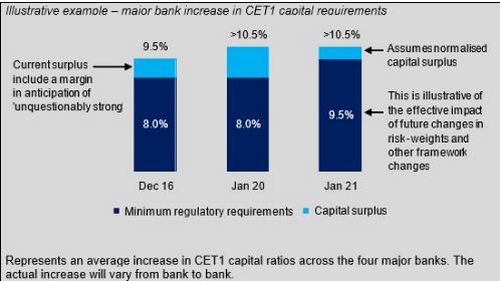 For ADIs that use the standardised approach to credit risk, APRA has concluded that it is necessary to raise minimum capital requirements by approximately 50 basis points from current levels to achieve capital ratios that would be consistent with the goal of ‘unquestionably strong’.

Given the diversity of capital ratios currently reported by ADIs that use the standardised approach, it is not possible to translate this into an expected increase in actual capital ratios. Many ADIs already hold a capital surplus substantially in excess of current minimum regulatory requirements, and will likely absorb this increase within their existing capital resources without any need to raise additional capital.

APRA considers that ADIs should, where necessary, initiate strategies to increase their capital strength to be able to meet these capital benchmarks by 1 January 2020 at the latest. In parallel with this build up in capital strength, APRA intends to release a discussion paper on proposed revisions to the capital framework, designed to establish capital requirements that will underpin ADIs having unquestionably strong capital ratios, later in 2017. Subject to finalisation of the international reforms, this will outline the direction of APRA’s implementation of the forthcoming Basel III changes to risk weights as well as measures to address Australian ADIs’ structural concentration of exposures to residential mortgages. It will also outline options APRA is considering to improve transparency and international comparability of ADI capital ratios. Following the discussion paper, APRA expects to consult on draft prudential standards giving effect to the new framework in late 2018, leading to the release of final prudential standards in 2019 which are anticipated to take effect in early 2021.

APRA’s expectation that ADIs meet the capital benchmarks outlined in the Information Paper by 2020, a year ahead of the expected effective date of the new prudential standards, reflects the importance to Australia of ADIs having unquestionably strong capital ratios, and that this should be achieved in a timely manner. By 2020, five years would have elapsed since the release of the final FSI report. Against that background, APRA encourages ADIs to consider whether they can achieve the capital benchmarks more quickly.

APRA Chairman Wayne Byres said: “APRA’s objective in establishing unquestionably strong capital requirements is to establish a banking system that can readily withstand periods of adversity without jeopardising its core function of financial intermediation for the Australian community.

“Today’s announcement is the culmination of nearly a decade’s financial reform work aimed at building capital strength in the financial system following the global financial crisis. Australia has a robust and profitable banking industry and APRA believes this latest capital strengthening can be achieved in an orderly way.

“Capital levels that are unquestionably strong will undoubtedly equip the Australian banking sector to better handle adversity in the future, and reduce the need for public sector support. However, a strong capital position still needs to be complemented by sound governance and risk management within ADIs, and on-going proactive supervision by APRA,” Mr Byres said.

In combination, the increases outlined in the Information Paper will complete a significant strengthening of risk-based capital ratios within the Australian banking system in recent years. In meeting this new benchmark, for example, the four major banks will have, on average, increased their CET1 ratios by the equivalent of more than 250 basis points since the release of the FSI report.

The Information Paper is available on APRA’s website here: www.apra.gov.au/adi/Publications/Pages/other-information-for-adis.aspx

In combination, the increases outlined in the Information Paper will complete a significant strengthening of risk-based capital ratios within the Australian banking system in recent years. In meeting this new benchmark, for example, the four major banks will have, on average, increased their CET1 ratios by the equivalent of more than 250 basis points since the release of the FSI report. [My emphasis]

It's past time to stop banks leveraging declared "unquestionably strong" capital ratios with pitifully low RWA adjustments in the low teens for so called "low risk" asset classes that get more risky by the minute with record low official interest rates.

APRA raising the residential mortgage risk weighting for ADIs using the internal ratings-based (IRB) approach from around 16% to 25% hardly acts as an adequate buffer to accommodate price setbacks for unaffordable, overvalued houses collateralising the lenders' assets. And more importantly, the banks' liabilities to depositors.