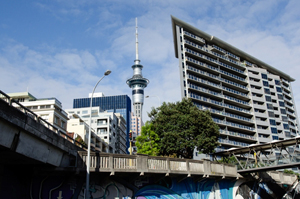 Banks are staying tight-lipped over talk they’re planning to make it easier for people to borrow to buy apartments.

Edge Mortgages director, Jon Purdey, believes the major banks are getting their ducks in a row to cut deposit thresholds on apartments to around 15%.

Currently, banks generally require apartment buyers to make 20% to 25% deposits on their purchases, before signing off their mortgages.

The Reserve Bank requires banks to restrict new residential mortgage lending at loan-to-value ratios (LVR) of over 80% (deposit of less than 20%) to no more than 10% of the dollar value of their new residential mortgage lending. However, new builds - with increasing numbers of apartments going up in Auckland - are exempt from the LVR restrictions.

While banks have traditionally taken a cautious approach towards lending to apartment buyers, Purdey recognises we have seen them compete for customers by loosening their policies in the past.

In September 2012 interest.co.nz reported ASB was prepared to give certain clients mortgages, for bringing deposits as low as 10% to the table.

Purdey says ASB even went so far as to securing a lender with a mortgage, after they only made a 5% deposit on a 17 square metre apartment.

“If a bank can differentiate itself by doing something a little bit different, then it will, and each of them have had their forays into this area”, he says.

“Now it looks like the change is coming in a more wholesale way, rather than one bank trying to differentiate itself away from the others.”

He maintains they’ll implement the changes before the Reserve Bank’s new restrictions on lending to property investors kick in on October 1st.

“I would guess they’ll be doing it before that October 1st deadline, where a portion of their lending is then going to be restricted anyway”, he says.

Here’s what the banks had to say when asked whether they are reviewing their policies around lending to apartment buyers:

Kiwibank: “We have no information to disclose other than to confirm that we are reviewing our lending criteria for apartments.”

Westpac: “Current maximum LVR is 80% and there is no differentiation for Auckland apartments in our policy… We are always monitoring housing market changes and reviewing credit policies.”

BNZ: BNZ isn’t planning to make any amendments to its Apartments’ Lending Policy.

ASB: No answer to this question.

The New Zealand Bankers’ Association chief executive Kirk Hope says, “This is essentially a competitive issue and we understand banks may be reviewing internal lending policies within their business.

“Competition among our banks is intense, particularly in the area of mortgage lending, and banks work hard to attract and retain customers within the bounds of their regulatory obligations. Banks take these obligations very seriously.”

“Banks have generally required a relatively high level of equity when lending on apartments”, he says.

“Any changes would have to be within current LVR lending restrictions.

“Size is among a number of factors that banks may take into account when looking at lending on apartments. When lending on apartments, particularly small ones, the bank needs to consider if it will get its money back in case of default. It may not where demand for very small residences is limited.

“Other factors banks take into account include the buyer's equity and ability to service the loan, and the title and governance arrangements for the building.”

Apartment size is something ASB did comment on when asked about potential changes to its apartment lending policies.

ASB’s head of home lending, Vince Clark, said, “Our lending criteria takes into account a range of factors; the most important of which is the customer's ability to service the loan payments and also includes the size of the apartment and apartment building, and whether the apartment is purpose built or a conversion.”

Purdey maintains any loosening of banks’ lending policies will only apply to “standard” apartments, 50m² or larger.

He maintains the tide is turning, and apartment living – particularly in Auckland – is losing its stigma.

Purdey says while there are still a number of foreigners buying inner-city apartments (especially the smaller ones) for their children studying in New Zealand or as investments, an increasing number of younger New Zealanders in particular are opting to buy apartments over houses in less convenient locations.

He says its high time banks loosened their lending policies for apartments, from an affordability point of view.

Purdey maintains the big banks will lead the way, raising their LVRs for apartments.

“For a smaller bank, it’s going to be too much of a risk on Day One to raise it. They usually follow in time what the big banks are doing, simply because the whole market’s become more comfortable with the direction.”

Why not put a little petrol under the collective Auckland property bubble cauldron? What else could the RBNZ expect? The signal was set firmly in this direction last Thursday - just spare us the governor's expedient system instability rhetoric.

This is exactly what happened in Melbourne! Don't we learn lessons from anyone? Do we have to repeat the same mistakes just for fun?
"Melbourne is becoming a city of “super-dense” towers, packed with tiny apartments that would be banned in Hong Kong, New York and London."
http://www.theage.com.au/victoria/melbournes-tiny-flats-would-be-illegal...
That...is what happens when 'free' money meets expectations of 'free' capital gains. It's not the developers fault. They just give the speculators what they want. "But they are unlivable!" So?.....

Exactly. Not what the politicians promised - right?

And here we have Hillary Clinton up to the same old tricks.

"America can't succeed unless you succeed, that is why I am running for president of the United States," she told a cheering crowd at New York City’s Roosevelt Island.

"Prosperity just can't be for CEOs and hedge fund managers. Democracy can't be just for billionaires... Prosperity and democracy are part of your basic bargain, too." Read more

I expected this after the first lvr rules were brought in.

Rbnz forcing banks to play it safe in one area means they can afford more risk in other areas, i.e smaller apartments going from 50% dep requirements to the rbnz limited 20%.

Even if the Banks reduce the deposit requirements they will only do on on 50 sm or more and then still have to conform to the Reserve Bank restrictions. Bit of a non story really.

Until they don't - are you an official RBNZ apologist?

Is that why they can command $400 plus rent per week for a 35 sq m 2 bedroom in central auckland or welly?

And what developers are producing shoe boxes anymore anyway? The bad sentiment around them (even though they are now selling for double 2010 prices) means everything I see being built is decent size.

I view a 35sqm freehold apartment bought for 250k and returning 400 per week rent as far safer than a 700k 3 beder in south auckland returning 500 a week rent.

I lived in an apartment that must have been a bit smaller than 35m2 for half a year. It was perfectly liveable for one person. I bought a 50m2 apartment for $350K with only 10% deposit back about 5 years ago - the bank bent their rules because they could see that it was a good freehold property and not a shoebox in a low-quality complex. If I wasn't living in it, I could rent it for $500+ per week as it's right in the middle of the city in a good building.
There's a generation of people (mostly younger than me) who have lived overseas and realise that living in an apartment in the middle of a city is much better than living in a house in the social/cultural desert of suburbia.
High density housing in the form of apartments is better than miles and miles of little-boxes ("made of tricky-tacky") stretching out into what was, in many cases, perfectly good farmland. Services (e.g. public transport) are better, and the council can do more because they collect more rates for the same amount of land.
Bring on the apartments, I say.

..and the council can do more because they collect more rates for the same amount of land.

[Insult deleted. unnecessary. Ed] - the sewerage, water, gas and electricity reticulation network needs to be upgraded for the same amount of land - that's what high density housing is all about -stack 'em high.

Not quite sure what you're getting at here. Yes, of course X number of people require Y amount of water, Z amount of gas etc, irrespective of how densely those people are housed, but there are still considerable saving to be made in the provisioning of that infrastructure if those people are densely populated. Furthermore, councils do earn more in rates from high density usage of land than low density.
When I lived in Hong Kong in 2007, I watched three workers dig a trench between two apartment towers for a broadband cable over the summer (I think few would envy that job!) The trench was about 15 meters long. Each tower had 8 apartments per floor, and there were about 30 floors in each tower. There is a lot more to getting broadband to people than just the cable you need to put on public/shared land, but consider how many people in a typical NZ suburb you would connect for 15 meters of cable!

Council cunningly changed to the new rates system prior the Proposed Auckland Unitary Plan (PAUP) being publicly released for submissions. So under PAUP you can potentially add more improvements - i.e. build higher/etc, which equals bigger rates for Council to collect.

This is being done to dampen the impact of the October changes which are causing our offshore Asian investors to freak out. China executes 1000's every year and squirrelling away your cash to NZ isn't approved of.

So Auckland apartment sellers need a fresh barrowload of mugs to take their place.

There's also a lot of supply coming on stream in the next couple of years. Finally politically, there is a need to present a solution for first hime buyers so I can't seem them being discouraged.

New apartments would not be subject to the LVR rules? So this is just a way for banks to get more lending volume that is exempt from the rules at a 15% deposit level.

If the RBNZ held the belief that banks would generally require 20%+ deposit for new builds (is this the typical level?) then this move by the banks could cause a reaction by the RBNZ. And fair enough too. As macbet said, its hard to find new mugs to keep the loan book growing.