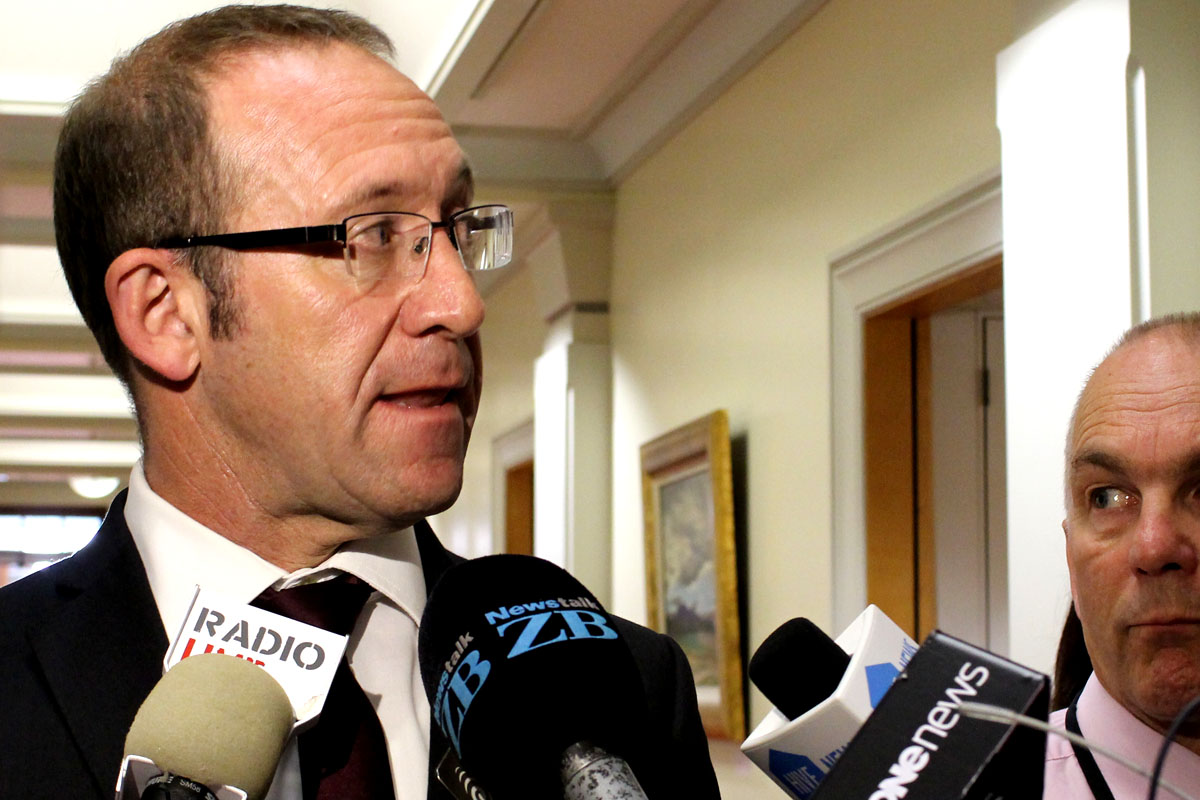 Labour has launched its first tax policy under new leader Andrew Little, but it's far from radical or even controversial, given the other major opposition parties have already either proposed it or support it, and the Government has said it is already looking at it.

Little launched Labour's proposal in a discussion document for a 'Flexible Tax for Business' with a speech to an Upper Hutt Chamber of Commerce breakfast.

The system would be similar to 'Pay As You Earn' systems for workers in that small businesses could choose to pay their tax through the year in installments, rather than through three large provisional payments. It would be known as a 'voluntary withholding tax.'

“Small businesses frequently tell me one of their biggest bugbears is how difficult it is to pay provisional tax," he said.

“Under the current system they are forced to guess their annual income and pay tax in three large instalments throughout the year. If they guess wrong, they can be faced with a big bill at the end of the year which can push a small business to the wall. Under Labour’s proposal, businesses will have the option of choosing to pay their tax through regular instalments at a rate they can adjust. This means businesses can align their payments to suit their circumstances."

'We can use existing IRD computer system'

Little said Labour would send the discussion document to business owners for feedback to improve the proposal before taking it to the 2017 election.

He said Labour had been advised on the proposal by former IRD Deputy Commissioner Robin Oliver, who had said it could be implemented using the IRD's existing FIRST computer system, which is currently being replaced in an eight year rebuild costing around NZ$1.3 billion.

Labour estimated that lifting the threshold would defer by one financial year the time when the government recognises about NZ$300 million of tax revenue for accounting purposes. It also saw a one-off cost to the Government of up to NZ$8 million in foregone interest if there was a 100% takeup of the scheme. Little said not all businesses would take up the scheme, given many larger businesses used tax pooling arrangements.

Acting Finance Minister Steven Joyce (Bill English is visiting China) said the policy was a 'cut and paste' of a previous Government announcement of almost identical proposals in March. He was referring to the IRD's Green Paper, which talked about simplified calculations of provisional tax based on real-time information (Pages 21-29) in its system rebuild.

Joyce said the consultation included the potential for a business PAYE, changes to use-of-money interest and penalties, increased used of tax pooling and the use of tax accounts, although he also suggested any changes would have to wait for IRD to build a new computer system.

"The changes will require new technology to be implemented, which will be developed as part of the IRD's Business Transformation project," Joyce said.

"Quite why Labour has started its own consultation is beyond me. Submissions are now closed but the Government would be happy to accept a late submission from the Labour Party in support of the proposal."

"While tax pools have assisted businesses manage provisional tax for a decade now, this idea would provide another sensible option to take the sting out of getting provisional tax wrong," he said.

Tax consultant and Interest.co.nz columnist Terry Baucher said Labour's proposal was well thought out and contained sensible proposals that could be adopted either before or during the IRD's tax simplification programme.

IRD research had shown New Zealand taxpayers were no better than other countries at paying on time despite having some of the heaviest penalties, he said.

"Increasing some of the current thresholds is long overdue," he said.

..You can drip feed prov tax now (Add on to your GST every second month if you want?)
Nothing new here..just a on the hoof announcement to get something into the media that doesn't involve Chinese bashing..
Could also be a set up from Parker/Robertson to undermine their leaders lack of business nouce.

Yes WP is also pushing the same idea. Wondering where the impetus is coming from.

Anyone is allowed to pay in advance, just like all the proposals are saying, and now there is even "Ratio" method which is official, based on propotioning it to revenue/profit shape.

I'm betting it's an in-house (behind the scenes) push to remove Provisional Tax and make it a Monthly Tax for cashflow "provisional provisional tax" in effect. Probably Kiwis are the only ones dumb enough to think it's there to help them

You really have to laugh at the Acting Finance Minister's comment. I will paraphrase for him:

"We already know we could do that but we haven't done that because the wheels of our bureaucracy either turn very, very slowly or fall off altogether".

The collective opposition parties are most certainly driving the government agenda at the moment. Exactly what they should be doing - and big ticks to all the others as well as David Seymour giving credit where credit is due.

but why are the others pushing it? It can already be done and helps no-one, why bring it up?

Yep, every couple of months when I do my GST return online, it asks me how much provisional tax I would like to pay.

It's not just about method and timing - but also about sorting out the [near criminal] late payment penalty regime.

While no one likes to pay penalties..what is the alternative? ..An easy going pay if you want/can scheme like in Greece where no one cared?
My understanding is that if you pay your prov on last years accounts and you under pay then you top up at the end with terminal tax(and a bit of use of money int if you are a company)
However if you revise your position down then find out you have underpaid then you may be up for some additional penalties.
A good accountant should be able to navigate through this anyway(that's what you pay them for.)
Not sure how Little thinks this will create more jobs(maybe a few bean counters)
Especially when the first thing they are likely to do should the ever get into power is to raise the company tax rate anyway

Oh pull another one. As I said earlier - the penalty regime here is near criminal (i.e., extortion by any other standard).

The interest penalties are high, but they are tax deductible

it is literally extortion. It's _supposed_ to be extortion. Not "government funded loans".

It's literally "Pay up or we punish you" _literally_ extortion.
As they say - if you're short on cash , go to your bankers and creditors, we are NOT your financiers.

Sadly for cash and capital poor New Zealanders it's a rock and a hard place.
But I have found our IRD leagues ahead of everyone elses' IRD-equivalent. If only we could get them from increasing their coverage (the net loss is still greater net loss to the economy, but is it a high level IRD failing or a government/political one?)

but that has nothing to do with provisional tax. businesses still get hit by it, whether it's the old style 1 hit income tax, provisional tax in 3+terminal, ratio in 6 ezy payments, or 12 smaller voluntary payments.

I know and changes to the penalty regime and thresholds are both things in the Labour policy that, I assume weren't considered by IRD in the paper referred to by S Joyce. See comments by T Baucher about what he likes about the Labour proposal at the end of the article.

but they will go against business interests not for them.

Kate..Where are you quoting Steven Joyce from? Your paraphrasing doesn't relate to his comments in the article..
Not sure if the opposition are driving anything at the moment...except a wedge between themselves and any foreign type voters...Little couldn't drive a car on a merry go round..

Ohhh I love it. Labour has brought up the topic of foreign buyers, the people are waking up, the Government is rattled and their supporters are clutching at straws...

get ready for the media paint over.

My paraphrasing absolutely reflects his comments .. you just haven't learned to read spin yet.

"tax pooling and the use of tax accounts, although he also suggested any changes would have to wait
for IRD to build a new computer system."

Is it just me? Do any other businesses wait until they install a customer computer solution BEFORE they come up with the operational specifications??

I cant get over why this government is so reactive and don't have one ounce of proactive in them.
everything they do is lets wait and see, is this not the party that represents the SME and financial literacy.
what business or SME or farmer sits around saying lets see what happens then make plans to deal with it I would suggest not many that survive very long

Money traders don't seek to influence the market only profit speculate on what others do. So that tells us who is pulling strings as Key is definitely not leader material (where has he led? he's been front man for someone)

Unusual to see Steve Joyce on the back foot. Is he sick of the PM leaving him to front foot all of Nationals problem issues? Even some journalists seem to be finding the courage to ask Govt Ministers (slightly) hard questions.

E.g. If you have 40k foreign buyers a year, how can an increase in housing supply actually fix the problem of sky high house prices?

For hard question - What is going to happen when the Auckland housing market turns into Bill English's "They have warehouses full of Milk Powder".....

National is really the reincarnation of the rogernomics Govt. A populist PM fronting, while the serious work of dismantling all Govt owned entities, and open gates for globalised commerce mainly benefiting large multinationals is being executed. Support for SMEs, family farms, regional areas, social leadership etc . - all gone.