BNZ's total operating income fell 2.9% to $1.131 billion as gains less losses on financial instruments such as wholesale funding, plunged $78 million to $55 million. Operating expenses were up 3.3% to $434 million as the bank hired 50 new small business bankers with 20 each in Auckland and Hamilton and 10 in Christchurch. Net interest income rose 3.8% to $882 million.

Parent National Australia Bank (NAB) put BNZ's gross impaired assets at $807 million at March 31, including $579 million of dairy exposures currently assessed as no loss based on security held. The $807 million figure was up up almost fourfold from just $216 million at September 30 last year, and up from $308 million a year earlier. The rise helped push assets at least 90 days past due plus impaired assets, as a percentage of gross loans, to 1.43% from 0.61% at September last year.

"While there’s no question that it is a difficult time for many dairy farmers and their families, BNZ is well placed to continue supporting our farming customers with thoughtful advice and financial support," BNZ CEO Anthony Healy said.

“Our approach is a prudent one. BNZ’s agri book is diversified, and asset quality remains sound. We commenced reviewing our dairy portfolio 18 months ago, working with customers as we took a ‘lower for longer’ view of the sector. We have also doubled our collective provision for dairy to reflect this."

“We have been working with our customers to plan for a range of scenarios and the majority of our farmers are enacting those plans now. From a financial management perspective, they’re adjusting well, removing costs and, if they have to, selling non‐core assets," Healy added.

“We recently announced an investment in cloud‐based farm accounting software provider Figured Limited, making it easier for farmers to work with their accountants, farm consultants, and rural bankers.”

Adrienne Duarte, BNZ's chief financial officer, told interest.co.nz that as an early adopter of the IFRS 9 accounting standard, the bank must be "pro-cyclical." BNZ's the only NZ bank to have adopted IFRS 9 thus far, but all banks must do so by 2018. This was a key factor in why bad and doubtful dairy loans were a bigger factor in BNZ's interim results than they were in ANZ and Westpac's earlier this week, she said.

The charts below come from NAB. DPD stands for debts past due, GIA is gross impaired assets, and EAD stands for exposures at default. 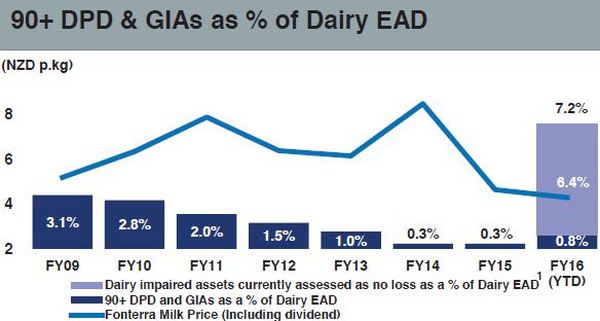 Market share in the residential mortgage market was unchanged over the six months to March at 15.5%, with Healy saying BNZ had "arrested" its declining market share having re-entered the mortgage broker market last year after a gap of 12 years. The bank's now working with 230 brokers through Mortgage Express and New Zealand Financial Services Group.

In Days of Yore when prudential standards were the property of an institution rather than imposed from without and depositors interests were placed ahead of borrowers, there was an olde saying: " yr first loss is yr best loss". Methinks that hard lesson is going to be learned again, one day.

call it a phobia?

NAB was quizzed by APP Securities analyst Brett Le Mesurier about why it had not taken a provision against the impaired new loans in NZ. NAB chief executive Andrew Thorburn admitted it was an "unusual circumstance" but said the bank's security over the loans meant provisions were not required.