With nothing positive to happen in the US-China trade war, the NZD will follow the CNY down against the USD to fresh lows, nudged even lower by the OCR cut. We will weaken against the AUD too: BNZ

Currencies
With nothing positive to happen in the US-China trade war, the NZD will follow the CNY down against the USD to fresh lows, nudged even lower by the OCR cut. We will weaken against the AUD too: BNZ 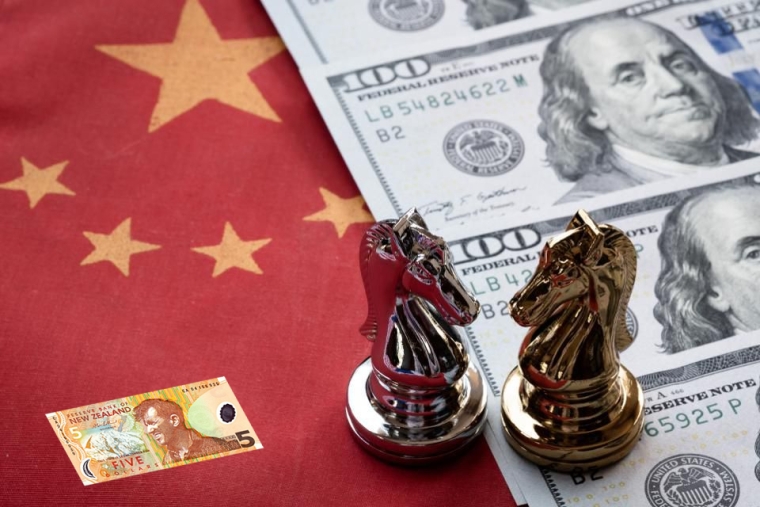 On Friday 2 August, just before dawn NZ time, President Trump tweeted that he would place 10% tariffs on the remaining $300b of Chinese imports not already facing punitive tariffs as of 1st September. This followed a restart of face-to-face talks between senior officials, where no progress on any trade deal was made. Trump was irked that China didn’t ramp up purchases of US agricultural goods as he believed was agreed and he claimed President Xi had not stopped the sale of Fentanyl to the US.

This escalation of the US-China trade war was a shock, considering that a truce had been agreed by Trump and Xi at the end of June at the G20 summit.

In our weekly FX commentary on 5 August we noted that “the escalation of the trade war is an alarming development – moving further away from our working assumption that some sort of agreement might have been in play late this year or early next year” and flagged downside risk to our NZD forecasts.

Trump’s escalation of the trade war has already reverberated through markets.  Of particular note, spot USD/CNY moved above the symbolic 7 mark, hitherto seen to be a key level of resistance in the eyes of the PBoC and the market. Furthermore, the RBNZ delivered a shock 50bps cut to the OCR this week, taking NZ interest rates significantly down across the curve to record low levels.

The weaker yuan is not just of academic interest. As we have noted on plenty of occasions, the NZD and CNY have been closely linked since the trade war began in earnest early last year.

As downward pressure is applied to the yuan in the face of further downside risk to the Chinese economy, this week the PBoC has been actively trying to contain the market-led depreciation. China was officially labelled a currency manipulator, a political gesture by the US that won’t have any material ramifications but ironically, over recent years, the PBoC has been concerned about the risk of capital outflows and its modus operandi has been to encourage a stronger-than-otherwise currency.

With the escalation of the trade war and no resolution in sight, market forces for the yuan will remain to the downside. The risk of capital outflows and capital flight means that the PBoC will allow gradual and orderly CNY depreciation – via use of its counter-cyclical factor in daily CNY fixings – but speculative short selling will not be tolerated. Now that the 7-figure is no longer an obstacle, USD/CNY is likely to continue to head higher, even if well managed by the PBoC. This is a fresh downward risk factor for the NZD in the period ahead.

The RBNZ factored in the risks about the global economic outlook for its rates decision this week and opted for a larger than expected 50bps rate cut. While the NZD fell significantly after the announcement, much of this reflected the market being wrong-footed. At this juncture, the low in the OCR projected by the OIS curve is around 63bps, just over 20bps lower than a week ago.  Over the same time the projected US Fed Funds rate is about 17bps lower over the week. NZ-US rate differentials haven’t actually changed that much and so the RBNZ’s actions are only of a secondary consideration for informing our NZD outlook. The reality is that the RBNZ is caught in the global web of central bank easing in a “race to the bottom” for interest rates, reducing the ability to use the exchange rate channel effectively from a monetary policy perspective. Our NZD revisions largely reflect the increased risks around the global outlook and bearish view on CNY, than monetary policy considerations.

Our prior NZD projections were predicated on two key assumptions. One, that the USD was close to a turning point, with the weaker US economic outlook (become more in synch with the rest of the world) and the Fed’s remarkable shift in view earlier this year, from one of projecting rate hikes to delivering rate cuts. The second assumption was that US-China trade tensions would ease, seen culminating in some form of trade deal either late this year or early next year, with no further ramp-up in tariffs in the meantime.

These assumptions led us to believe that the worst was over for the NZD and our projections built in a mild recovery through the rest of the year (targeting 0.67-0.68) and into 2020 (reaching and nudging just above 0.70). That is clearly too optimistic now in the face of the trade war escalation.

The issue with projecting the NZD is that much of its performance will depend on the whim of President Trump. We alluded to this theme exactly one year ago (NZD: At the Whim of DJ Trump” 9 August 2018), where we stress-tested our model and came to the conclusion that “a move below 0.65 couldn’t be ruled out…in the event of any fresh tariffs on the scale proposed”.

Our new baseline assumption is that the proposed ramp-up in tariffs from 1 September goes ahead but no further tariff impost is announced.  While it remains possible for some sort of (limited) trade deal being struck between the US and China prior to the November 2020 Presidential elections, we assume nothing positive will happen at least through the remainder of 2019 and early 2020.

Thus, the driving force for the NZD into year-end will be a weaker yuan and this is expected to see the NZD reach fresh lows. In forming our forecasts, we have relied to some extent on the existing relationship between CNY and the NZD, in force since the trade war began. 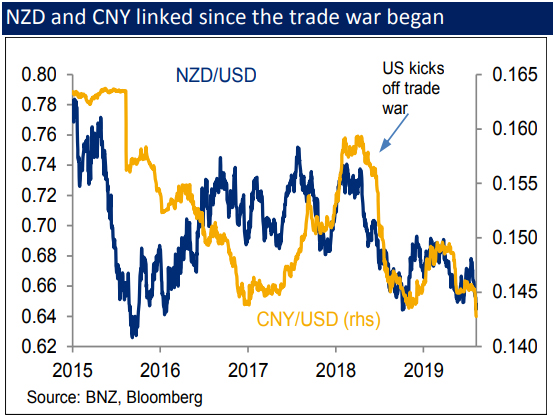 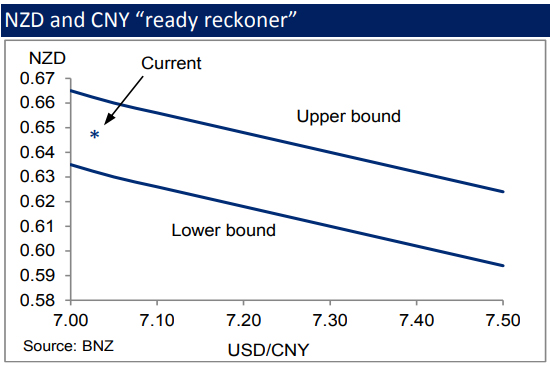 For the period since the trade war began in earnest (beginning of 2018), we have modelled the NZD as a function of CNY to gauge an idea of elasticity. The next chart shows an NZD-CNY “ready-reckoner” showing how the NZD could track in an environment of the trade wars remaining forefront of mind and USD/CNY drifting higher.

Our new USD/CNY forecasts project the yuan to hit 7.40 late-2019, early-2020. Our ready reckoner suggests that this level is consistent with the NZD anchored around USD0.60-0.63. We have pitched our new year-end forecast around the middle of this range, near USD0.62.

While our NZD forecasts are much lower, we have left the recovery profile for 2020, albeit now coming a bit later than previously thought. This profile is likely to require some form of trade deal between the US and China, however limited, which proves capable of brightening both the China and global growth outlook. Such an event is difficult to predict with any high degree of confidence but is motivated in part by a perceived need for Trump to maintain the support of the farming community heading into the Presidential election cycle. If a deal is struck that entails a partial scaling back of prevailing US tariffs, then the more confident we’d be in a recovery for risk currencies like the NZD next year.

With Trump’s actions a key driver, a number of alternative scenarios, positive or negative, are clearly possible. One tweet could change the calculus considerably. On the positive side, an earlier or more comprehensive trade deal could be struck, although given recent events this optimistic view looks increasingly unlikely. The actual trend has been one of increasing escalation of the trade war through the past 18 months and further tariff announcements must be considered a good chance. Our new NZD forecasts will inevitably need to be scaled up or down accordingly.

With China at the epicentre of global concerns and the strong link with Australia and NZ, our NZD and AUD forecasts have been downgraded the most against the USD, leaving NZD crosses weaker than previously projected.

Our NZD/AUD cross forecasts are little changed. We have been projecting a weaker NZD/AUD cross rate into year end and we remain convicted on that call.  The surprise 50bps RBNZ rate cut has given a nudge for the cross in the projected direction.  The RBNZ and RBA cash rates are now aligned and are expected to follow each other, with 25bps rate cuts projected for both in November, effectively priced in already.

Our fair value model estimate is closer to 0.93-0.94 and that is where we expect the cross to gravitate into year-end. The cross has been trading above fair value for some time, given perceived greater risks facing the Australian economy, but recently more positive housing market data (supported by RBA rate cuts) and the positive election surprise a few months ago mean that the NZD “premium” in the cross rate is no longer valid in our view. Similarities between the NZ and Australian economic outlooks far outweigh any differences at this juncture. 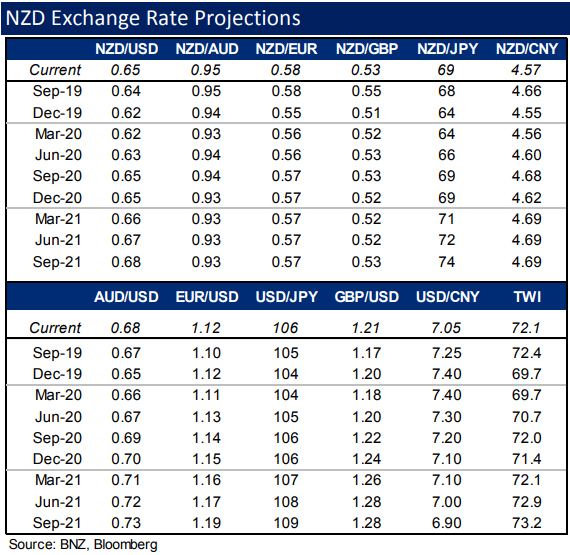