RBNZ cuts OCR by 25 bps to record low 1.75%; forecasts OCR to be flat from here; but says may have to adjust policy again given international uncertainties

RBNZ cuts OCR by 25 bps to record low 1.75%; forecasts OCR to be flat from here; but says may have to adjust policy again given international uncertainties 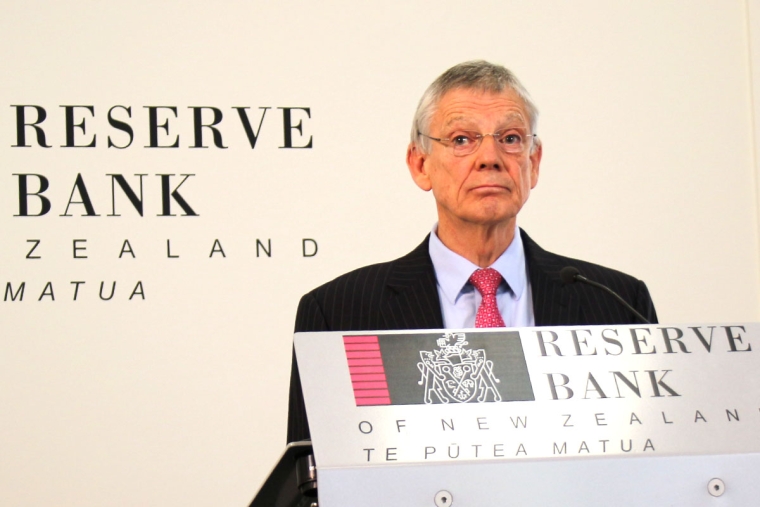 The Reserve Bank of New Zealand has cut the Official Cash Rate by 25 basis points to 1.75% as universally expected and has forecast no more cuts because it says monetary policy is now relaxed enough for inflation to rise back into the middle of the bank's 1-3% target band.

Governor Graeme Wheeler said significant surplus capacity existed across the global economy despite improved economic indicators in some countries and that global inflation remained weak even though commodity prices had come off their lows.

"The exchange rate remains higher than is sustainable for balanced economic growth and, together with low global inflation, continues to generate negative inflation in the tradables sector. A decline in the exchange rate is needed," he said.

The New Zealand dollar jumped almost a cent to 73.4 USc after the statement.

"Although house price inflation has moderated in Auckland, it is uncertain whether this will be sustained given the continuing imbalance between supply and demand," he said.

"Annual CPI inflation was weak in the September quarter, in part due to lower fuel prices and cuts in ACC levies. Annual inflation is expected to rise from the December quarter, reflecting the policy stimulus to date, the strength of the domestic economy, and reduced drag from tradables inflation," he said, adding that monetary polcy would continue to be accommodative.

"Our current projections and assumptions indicate that policy settings, including today’s easing, will see growth strong enough to have inflation settle near the middle of the target range," he said.

"Numerous uncertainties remain, particularly in respect of the international outlook, and policy may need to adjust accordingly."

The bank forecast in its Monetary Policy Statement the OCR would not fall further than 1.7% in its forecast horizon out to the December quarter of 2019.

The New Zealand dollar jumped almost a cent to 73.4 USc after the statement.

yes so why even bother

Wheeler says the RBNZ considered its decision to cut the OCR again this morning after the US Election result & reaffirmed it was the right one.

Yeah cause they have been sooo right for years now. Not

Possibly because it has already been priced into the market, as everyone expected a rate cut due to previous hints. They probably should stop giving out indications prior to announcements, so they aren't forced to do it if conditions change.

But these 7 cuts have helped fuel the rampant housing inflation and reduced bank interest rates to depositors significantly and reduced incentives to saving for productive purposes.

How do you know they haven't 'helped' inflation or the NZ dollar? Are you saying if the OCR was 7 x 0.25% higher that the NZ dollar and inflation would be exactly the same? I doubt that would be the case...

The NZD would have had an inflated value which translates to New Zealand importing even more deflation because overseas goods cost less relative to our dollar.

That's like predicting it will rain again before Christmas 2017.

What Happened to DTI - No mention of that.

May be government has given warning to RBNZ

Having another meeting with English in a couple of weeks time. Even if added to toolbox rbnz said they wouldn't apply them at present while auckland is clearly slowing. I took that as they would apply them next year only if auckland prices kick off again like they did a few months post the 2015 30% rule.

I don't think auckland prices will take off again as too many other factors now at play, last time most auckland investors merely had to revalue their portfolio and juggle lending against outside auckland property to be able to keep buying. This time auckland prices havent gone up as much to let people simply re-value and keep buying, and this time the 40% rule is nationwide so cant juggle loans to pull equity out of property outside auckland to be used to buy more in auckland as could be done last time.

Tony Alexander is wrong as he continues to maintain auckland prices will keep going up unabated, and the DTI will be in early next year. I say neither will happen. Auckland flat or mild falls, regions will remain positive for a few years as they play catch up esp with Fhb's who have sat on sidelines for a long time meaning pent up demand which will last several years.

i dont really understand whats the point of cutting OCR, since main banks wouldnt pass cuts to home mortgages so the OCR cut wouldnt help with increasing inflation, and also wouldnt help with devaluing the dollar coz it just jumped up and it never comes down...can someone explain to me why on earth RBNZ bothers cutting OCR at all!!!! i am confused!

to give banks some relief, higher margins, because they'll need it for what's coming..

It's probably not about home owner mortgages. RBNZ have said they have wanted to drop the OCR previously but didn't for the very reason that they didn't want to see mortgage rates drop and the housing bubble inflate further.
However there are other types of debt that can also lead to increased inflation, and that might stimulate the economy. Housing debt is not productive debt for the economy, but loans to businesses etc might be.
And there is no chance of NZD deflating whilst the OCR is so much higher than everyone else's, because there will still be too much easy carry trade. However, there may be increases in interest rates around the world at some point soon, in which case, the current OCR drop will start to look more inline with the rest of the world. The exchange rate game is also massively psychological. And the lower OCR can at least offer a decrease in the psychological appeal of the NZD. RBNZ can only do some much in respect to the world's appetite for risk and enthusiasm for NZD.

the rbnz is there to keep the banks stable and happy, not to make the world a better place.

BNZ is not passing on the rate cut. So shall we just scrap the RBNZ now and save ourselves all the trouble.

The bank forecast in its Monetary Policy Statement the OCR would not fall further than 1.7% in its forecast horizon out to the December quarter of 2019.

Let's hope the RBNZ can do better than that, or all forward economic growth opportunities are dashed. Current eurodollar yield curves reflect as much.

Looks like ASB has reduced some of their savings rates.

So what are the benefits of this OCR cut ?

It does feel a bit like the 'calm before the storm'. They haven't really got much room to move with the OCR at historic lows

It was a very weird experiment and it had to end eventually.