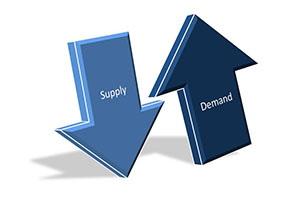 In yesterday's Westpac review of inflation and interest rates, they made the following observation:

Another factor is that banks’ funding costs are evolving independently of the OCR. For several years after the financial crisis, growth in deposits was sufficient to meet banks’ funding needs. But in recent months, deposit growth has slowed markedly, at the same time that credit growth has accelerated. In principle, banks can meet this funding shortfall through offshore wholesale markets, but there are limits to how far they can go down this path – partly due to tightening international regulatory requirements, and partly due to cost. If the constraints on funding persist, this will likely manifest as some combination of higher interest rates and tighter lending standards.

Domestic funding growth, underpinned by fast rises in household bank accounts, has been a feature of the current New Zealand economy.

We chart the rise in household deposits here, and the rise in home loan and personal finance borrowing (which includes credit cards) here and here.

These series have shown stronger long run rises for deposits than borrowing. On this basis, banks have been able to get much of their extra funding needs locally.

But of course, there is more to the economy than just households. Business and government are also part of the market that banks service.

Using the RBNZ S6 and S7 series, you can find the overall lending demand and funding supply for New Zealand banks.

And what that shows is that for the past six months, there has been a consistently more lending going on than supply of funding.

And that is a new situation, as this chart shows.

There is no issue when the red line is above zero - in fact when that is the case, banks are oversupplied by savers and can reduce the interest rates they pay savers.

But when the red line is below zero, banks need to find new sources of funding to meet the demand for loans.

To stay within their core funding ratio, and to meet minimum mismatch requirements, banks have started to raise the offer rates to savers. They will be doing much more than this of course, but this is one reason we are seeing higher term deposit rates for longer terms.

There have been consistent shortfalls for most of 2016. In fact, the -3.3% drop in the nine months of 2016 so far is greater than any negative annual change since the start of this data.

Even for New Zealand bank treasurers, this -$10 bln shortfall is a concern and needs to be addressed.

This may be one reason we are seeing a turn in the market to favour savers over borrowers.

And it may be a reason we are seeing a tightening in lending standards by banks.

Bank margins may not be the real driver. This same data discloses "average monthly weighted interest rates" for both series, and you can plot the difference between them too, as per this chart.

Margins aren't the issue. But the level of funding available to meet the loan demand is.

Using the RBNZ S6 and S7 series, you can find the overall lending demand and funding supply for New Zealand banks.
And what that shows is that for the past six months, there has been a consistently more lending going on than supply of funding.

For example, what happens if one adds the NZD 93.188 billion funding sourced from currency swaps associated with foreign wholesale bank borrowing ( Section A3.3 Total for Sep '16) with respect to note 1 at the bottom of S6 stating Figures exclude foreign currency funding, which accounts for approximately 21% of total registered bank funding as at December 2015. NZD funding costs also exclude the impact of hedging, for example interest rate swap costs incurred against fixed rate claims?

From where do these CCY swapped NZD originate? A thin air money tree? I doubt it.

The way I see it is that the funding gap is the money that is leaving the NZ banking system.

A bank creates a mortgage and deposits $500k in the borrower's account. The borrower buys a house and deposits the $500k into the sellers account. The seller then imports a $50k boat and buys $50k in overseas shares. The remaining $400k is used to buy NZ consumables and assets and stays in the NZ banking system.

$100k has left the NZ banking system and needs to be funded by the foreign wholesale bank borrowing.

The problem with any potential collapse in the property market here is that risk aversion would lead to a self-reinforcing spiral of capital flight, rising interest rates and currency depreciation.

It's called our current account/trade deficit. We're highly skilled in this area.

Good work David thank you, it is very interesting to have the situation that has been alluded to by various banks recently being set out so clearly.

My previous difficulty with statements that there is a shortage of deposits comes from my understanding that because bank’s liabilities in form of deposits, whenever a bank makes a loan, it simultaneously creates a matching deposit in the borrower’s bank account, thereby creating new money.

Therefore how can there by a deficiency in funding (of deposits to lending) in this circumstance?.

Where I have got to is that an individual bank’s wholesale borrowing to fund a shortfall in deposits thereby creates the deposit shortfall for the system that requires more (foreign currency) borrowing by other banks. This would seem to create a positive feedback that such that bank borrowing creates the need for more borrowing by all banks in the system (given that the alternative of constraining their rampant lending is abhorrent to them).

I have mentioned in the past this article is a description of fractional reserve banking applicable to the US, but not New Zealand . Even the former has allowed it to become moribund with the introduction of the daily sweep to non reserved money market depo accounts. If you believe otherwise point to an RBNZ link detailing the withheld reserves summary similar to H3 published by the Federal Reserve.

One of the biggest intellectual impediments to understanding where we are in the arc of monetary evolution is Positive Economics. As Milton Friedman described it in 1953, it was essentially the doctrine of trying to explain a lot knowing very little. In such a simple description it sounds ridiculous, but in the reality of complex systems growing only more complex it is actually somewhat understandable (the limits of knowledge). Read all three parts starting here.

http://positivemoney.org/how-money-works/how-banks-create-money/
http://www.bankofengland.co.uk/publications/Documents/quarterlybulletin/...
In the modern economy, most money takes the form of bank
deposits. But how those bank deposits are created is often
misunderstood: the principal way is through commercial
banks making loans. Whenever a bank makes a loan, it
simultaneously creates a matching deposit in the
borrower’s bank account, thereby creating new money.
The reality of how money is created today differs from the
description found in some economics textbooks:
• Rather than banks receiving deposits when households
save and then lending them out, bank lending creates
deposits.
• In normal times, the central bank does not fix the amount
of money in circulation, nor is central bank money
‘multiplied up’ into more loans and deposits.

they may create deposits with a loan but we get to work to pay the interest.

Haha, keep asking that one Peri.

what are your thoughts on this article? Are low rates more of a drag on an economy than a stimulus as it erodes personal wealth of savers?
https://mythfighter.com/2009/09/09/low-interest-rates-do-not-help-the-ec...

Given recent evidence of a slowing housing market, loan demand is about to slow down. The funding mismatch may turn out to be temporary.

The % figures for the September 2006 year are inconsistent with the numbers shown.

Hi David. In dollar terms, it appears that annual lending has *always* been well above annual funding.

Calculated directly from the data you provided in the article above, here is the excess amount of annual lending over and above annual funding:

That is quite correct. But the treasurers at our banks have always had that issue dealt with. What is 'new' is the way these different flows are changing. And these changed flows in the past six months or so come at a time when US regulators have choked off a source of wholesale funding for 'foreign' banks (by imposing new prudential rules on fund managers). So the 'usual' easy cheap sources are not as available as they once were, just as the impetus tips toward the need for more.

Thanks for this very helpful clarification. As you say:
1. Bank treasurers have always filled the gap between funding and lending by borrowing on-market.
2. At the moment the amount of on-market funding required is a bit higher ($93b vs average $80b)
3. Changes by regulators mean the cost of on-market funding has risen

You have written a useful article about #2 which is important, and it would also be great if you write an article about #3. In my view when understanding why deposit and mortgage rates are being driven higher #2 (more need by NZ banks for on-market funding) accounts for about one-third of the impact, and #3 (higher global costs to obtain on-market funding) accounts for about two-thirds of the impact.