ASB cuts one rate to 3.95% but raises two others as the sub 4% rate level embeds in the current home loan market; only three stragglers to go now

ASB cuts one rate to 3.95% but raises two others as the sub 4% rate level embeds in the current home loan market; only three stragglers to go now 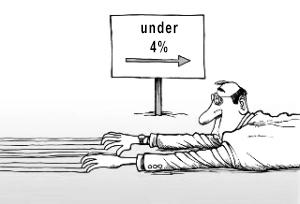 Yes, ASB has joined the under 4% mortgage rate party. But it feels like they are following reluctantly.

ASB, which is the second largest mortgage bank in New Zealand, has adopted the 3.95% one year fixed price point.

But the bank has taken the opportunity to raise rates for two other fixed terms, one of which ASB was market-leading on.

Its 'special' rates only require customers to have a minimum of 20% equity; that is, an LVR of 80% or less.

And ASB is raising the hot three year rate of 4.39%, which was market-leading, up by +10 basis points to 4.49%. That is a level adopted by just about every bank.

ASB's changes are all effective on Wednesday, November 14.

So far today (Tuesday), wholesale swap rates are moving very little, with just a hint of weakness for durations of three years and above.

After today's shift by ASB, only three banks are not offering a sub 4% fixed mortgage rate; Kiwibank, Co-operative Bank and TSB.

As at June 2018, ASB had 64.9% of its loan book in mortgages. That is the largest proportion of any of the big Aussie banks operating in New Zealand, and of the majors is only higher at Kiwibank which has 88.9% in housing loans. The bank with the most balanced loan book is BNZ with 47.3% in housing loans and therefore the only bank that can't be called a mortgage bank.

Kiwibank earlier had a sub 4% rate, but that has since expired.

bw, you seem to be upset that banks are lowering their interest rates?

Good news for those of us with chunky deposits considering a purchase.

Put your butchers chain mesh gloves on if you are going to try to catch a falling knife..

The Chch knife is sitting quietly on the kitchen bench right now, very easy to catch.

ah, yes, Chch might be spared the worst since it has had its recent housing build boom. Still, if rent is cheap no rush is there?

We ALL Live in a Desperate Yellow Submarine ..

The article is about interest rates, not housing prices. Please read the articles before commenting off topic

are they not linked, joined at the hip, twin sisters?

DISCLAIMER: Rate may not be special after 12 months.

Lowest rate is yet to come. Lots people will re-fix after New Years/summer time, one year fix is the new floating. Banks will dish out even better rates. Good for some, sad for others.
New age recession = low prices, cheap rates and low wages. Thank the internet for fast information.

I found the break fee calculator under the tools tab was reasonably accurate for the ANZ break fees.

I just fixed for 1 year with BNZ for 4.09% on one of the parts of my mortgage - actually it doesn't roll over until December but I've now got a 'rate-lock' which has a $500 fee to break.

However I have another part of my mortgage, which is not much smaller, currently at 4.55% that isn't due to come up for renewal in 10 months time in September next year. Break fee on this is only $190 and monthly payments will reduce by about $50, so after 4 months I'll be in the black, with 20 months left on the fixed term. Almost certainly going to go ahead with this, and also enquiring about breaking my other mortgage section which is fixed for 3 years at 4.79% until December 2020.

I'm going to do some digging around what the RBNZ says about break fees and how 'reasonable' they have to be, and whether this 'rate-lock' fee would fall under that definition or not.

Wow, that sounds terrible.The fact it's a straight $500 regardless of what was fixed makes it seem like it's not actually a collection of costs

As a side - unless you need the money, dont reduce your payments... that means more interest in the long run. The quicker you pay, the cheaper it will be

Signs of desperation perhaps. I'm no banking expert, but business sectors that are competing primarily on price is not a good thing. Banking is different I know, but how much more do the specu-punters have left in them? It can't go on forever.

It's because there is no 'growth' in the economy.

Thats why Allan Bollard introduced us to the 'emergency rate". If you cannot pay %3.9 we will drop it to %2.9, further into the abyss of desperation and despair.

" Examining the relationship between 3-month and 10-year benchmark rates and nominal GDP growth over half a century in four of the five largest economies we find that interest rates follow GDP growth and are consistently positively correlated with growth. If policy-makers really aimed at setting rates consistent with a recovery, they would need to raise them. We conclude that conventional monetary policy as operated by central banks for the past half-century is fundamentally flawed. Policy-makers had better focus on the quantity variables that cause growth."

Nobody is drawing any parallels with Japan with regards to IRs. I guess that will be because of the following:

- Nothing cataclysmic has happened.

- Consumer spending is alive and well.

And they still run a current account surplus. Could you imagine NZ and Australia doing the same?

Every single stock on the Nikkei 225 is down.
https://www.nasdaq.com/article/japanese-market-falls-nikkei-down-3-2018…

...further into the abyss of desperation and despair.

That will come when the taxman asks for his cut of my profits. Oh the misery!

is he getting gst too?

We seem to view an expanding money base and growth as the same thing or at least think that one leads to the other these days.

Is this actually a good or bad thing for the economy? IMO I think it will mean that borrowers can afford to service a larger mortgage, so can afford to borrow more, and potentially push house prices up even further. Maybe a good thing for those already with a mortgage who want to pay it off earlier.