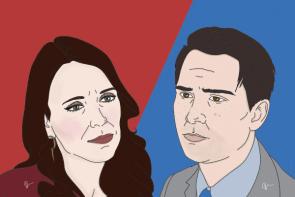 Labour and the Greens have enough support to form a government without the help of New Zealand First, according to the latest 1 NEWS Colmar Brunton poll.

National, with the help of an ACT seat, could get 55. You need 61 seats to govern.

With support for New Zealand First down 1% to 3%, the party wouldn’t meet the 5% threshold to get into Parliament.

At 6%, National Party Leader Simon Bridges is neck-and-neck with National MP Judith Collins when it comes to preferred prime minister. Support for Bridges is down 1%.

Prime Minister Jacinda Ardern has reached her highest ever level at 44%, up 5% from November.

Speaking of necks, Simon's must be on the line.

Bit of a battle of the bunnies if you ask me. Unless there are some unexpected significant developments that alter all the dynamics, then without a meaningful coalition partner National won’t gain power next year. So unless Collins is a real bunny, she should be savvy enough to know that there is more harm for her than good, in leading National into that sort of a result. But heck, ambition is difficult to bridle. Just have a look at what Shakespeare had to say about Coriolanus for instance.

I wonder how a well-informed populace would vote?

Yeah right.
Labour polling higher due to all the great work they are doing, NOT
Haven’t acheived anything of any benefit.
National doesn’t need to do much as !abour are going to go and self destruct this year!

Isn’t that what you said about last year?

Yes, they have! Negative Gearing changes come in on April Fools Day - how appropriate!

National is too busy getting bent over by China to do anything at the next election!

Just in case you didnt see it

So NZ First hasn't kept any of their election promises. Especially around immigration.

But hey, who cares right? 6 months out from the next election Winston will start his old tricks again, baiting the media etc.

And all his nutty followers will say "You go Winston, you've got my vote!"

Bridges v Collins in the 4.30 at Tauherenikau,
The 2-year-old v The Nag
What a choice of horse to back, may skip this one and wait for the 5pm

What did TOP poll?

Kiwis very happy with this government they are now way out in front. Labour and the Greens will cruise to win unless there is a miracle.

The 'miracle' will be the media holding them to account over their failure to deliver a single key policy that wasn't reversing tax cuts. Instead we get to talk about babies and look, Jacinda's at the Art Deco Fest! Look, now she's running a BBQ! Yass Queen Slay!!!!

The line between the fourth estate and the endless-sycophancy of Twitter has become permanently blurred.

Right on the button GV. What a circus with a half wit ringmaster and an oversupply of clowns.

she has become a mirror of JK, all about building her own profile and popularity and less about getting her government to make some meaningful changes for the good of future of NZ

Those that would rather have had nationals $20 a week tax cut are welcome to their opinions, but when they start spouting nonsense and saying labour hasn’t delivered on anything - then they should be aware they sound like muppets.

No political Party is addressing what lies ahead - Climate Change is just the exhaust of the real problem.

But the Greens have the inside running as the truth manifests (the Limits to Growth, in essence) followed by Labour. National are away back in the space where you usurp democracy in favour of corporate agribusiness. Just a dinosaur.

True, but their biggest issue was mishandling of overseas owners shunting tax paying kiwis to the side in the race to sell NZ housing and real estate to the highest (overseas) bidder. In short they did jack to protect the sovereignty of NZ being controlled by people born here and choosing to spend their life working and paying tax here. Last I looked, that is actually the Governments job.

If they don't take this seriously they will be in opposition for another term, maybe two.

It's a bad result for National, though normal for incumbent govts to get a small boost through low-news summer break. Nice to see Winston down where he belongs. I'd be really interested to see what percent the undecideds make up. As that would reveal whether it is an actual shift from right to left, or just Nat voters becoming undecideds. And a lot of wavering undecideds could also boost Greens and NZF on an election day. Unfortunately that data seems to be no longer published - more dumbing down of tv news.