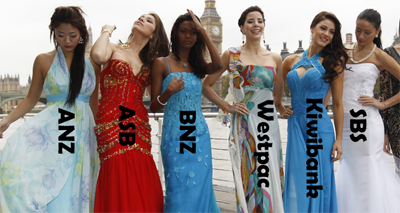 Three hundred and thirty five million dollars is a lot of money to anyone in New Zealand. Be it Glendowie's resident billionaire Graeme Hart, whose global packaging empire has a US$131 million US equity deficit, or the Morgan family who have pocketed hundreds of millions from selling Trade Me and Gareth Morgan Investments.

And it's even a lot of money for our big four banks. It's the amount the four - ANZ, ASB, BNZ and Westpac - have increased their combined annual net profit after tax by, with this combined profit rising 12% to NZ$3.2 billion. This comes at a time when the interest rates on their key product - loans - are at historic lows, and lending growth is in the low single digits.

Then again, we kiwis do have plenty of debt, especially against our homes and farms, so the interest on it keeps ticking over. Based on the Reserve Bank's sector credit data as at the end of September, New Zealanders' NZ$316 billion of debt is equivalent to about 154% of our annual Gross Domestic Product.  In a paper released earlier this year the Bank for International Settlements (BIS), the central banks' bank, went as far as suggesting the surge in private debt during the noughties even reduced New Zealand's productivity growth.

The NZ$335 million rise in combined profit from the Australian owned banks comes with three of them - ANZ, ASB and Westpac - having produced record annual profit. The fourth, BNZ, actually recorded a NZ$91 million, or 14%, drop thanks largely to a NZ$353 million plunge in its gains less losses on financial instruments at fair value, with these instruments including the likes of derivatives and swaps.

As big a number as NZ$335 million is, it's less than half NZ$766 million, which is what the big four banks' combined profits grew by last year.

*Year on year growth figure uses Westpac's annual profit figure reported for 2011 rather than restated one.

Following this latest set of results the local banks are still likely to be there, or thereabouts, from a global profitability perspective, and they're also still outperforming their parents. The average net interest margin across the big four Australian banks for their latest financial year was 2.17%, which was 30 basis points shy of their kiwi subsidiaries average of 2.47%.

And in terms of return on average assets, the New Zealand big four come in with a combined average of 1.17% compared with their Aussie parents 0.94%.

The strong profitability of New Zealand's banking sector doesn't end with the big four. State owned Kiwibank posted record annual profit of NZ$79.1 million in August. And according to KPMG's Financial Institutions Performance Survey for the June quarter, the Co-operative Bank and SBS Bank had the highest net interest margins of all the banks at 2.70% and 2.66%, respectively.

So where does this leave customers?

In a good position to haggle with banks. Despite the developed world leading profitability of the sector, there are plenty of banks chasing your business, especially if it's good business. If you're a borrower you ought to try and bargain down the advertised interest rate, and if you're a saver, you ought to haggle for an increase to the advertised interest rate. If your bank won't budge, talk to other banks. Turn it into a beauty pageant.

After all, shifting banks these days is easier than it has ever been with a simplified process introduced in late 2010 meaning all the customer's supposed to do is fill out a form and leave the banks to do the rest of the work.

As Westpac CEO Peter Clare pointed out this week New Zealanders are more loyal to their banks than Australians. Let's make sure they earn that loyalty.

*The BNZ figure is gross loans, the others are net loans.

See all our stories on bank profits here.

Interestingly, new RBNZ Governor Graeme Wheeler defended bank profits here when I asked him about them yesterday. He said returns on assets were in line with OECD levels and returns on equity were lower than before the crisis.

He said such profit levels were acceptable.

You'd expect nothing less than comments like that from a loyal employee.

How does a tiny population of 4.4 million people come up with the money to pay all our high flying executives, government or otherwise? - no wonder it is cheaper to live in the USA - they have us beat on the productivity front everytime and it's not just them - it's just about every country in the world. "Who do we think we are"? Or more to the point who do they think they are?

Some of these high salaries are quite obscene. Perhaps they could take earnings over 150k at a really high rate, say 60%

Waiting for the deposits to go down some more soon....

Kiwis think that we are a big country famous for our big dairy industry.

Too right, we are a very little cow that is being milked like there's no tomorrow.

FYI here's a press release on bank profits from The Greens:

New Zealand’s foreign-owned banks are some of the most profitable in the world, the Green Party said today.

Parliamentary Library research shows that the big four Australian-owned banks – ANZ National, BNZ, ASB, and Westpac – are amongst the most profitable banks in the world and this differs from Reserve Bank advice to Parliament this week that said that our foreign-owned banks’ return on assets was ‘about average’ among developed nations.

“Earlier this year, the Bank for International Settlements found that Australia's big four banks were the most profitable in the developed world for 2010 and 2011 and record results this year suggests that picture is unlikely to be any different,” said Dr Russel Norman.

“In 2011, the big four Australian banks made a pre-tax return of 1.19 percent on assets compared with a global average of 0.36 percent.

“Our Australian-owned banks are actually some of the most profitable in the world, contrary to advice recently given to Parliament by the Reserve Bank Governor.

“When you make the comparison of the profitability of our banks with the rest of our economy, it’s very clear our banks are making excessive profits to the detriment of jobs and incomes.

“Our former Reserve Bank Governor said excess bank profits were the price we had to pay for a stable banking industry,” said Dr Norman.

“I’m concerned that our new Governor has adopted this same complacent mantra leaving our banks to make excess profits to the detriment of the rest of the economy.”

Excessive bank profits act as a drag on the wider economy raising the cost of borrowing for productive enterprises, farmers, and home owners. Dr Norman also denied that excess profits were a sign of a strong banking sector.

“Lehman Brothers, Merrill Lynch, Royal Bank of Scotland, HBOS, and Bear Stearns were returning anything from 19–26 percent return on equity in the year before they collapsed requiring massive tax-payer bail-outs and sending the world’s economy into deep recession,” Dr Norman said.

“We can’t afford to have a complacent bank regulator that looks at excessive bank profits and then looks away.”

great article by brian gaynor iin the nz herald this mornning regarding the sale of the BNZ by the nats and that great loyal kiwi MR FAY.

we are a stupid lot alright.