Personal Finance
Interest rates have been a key driver for gold in both 2020 and 2021. As interest rates have moved higher, the gold price has decreased but higher inflation expectations may provide some support for gold 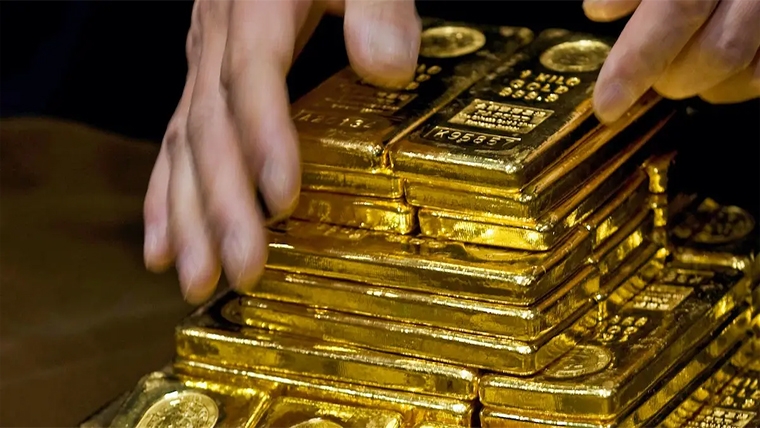 One of the four key drivers of gold is the opportunity cost of holding it.

In particular, the level and direction of interest rates are good indicators of gold’s performance, especially in the short and medium term. 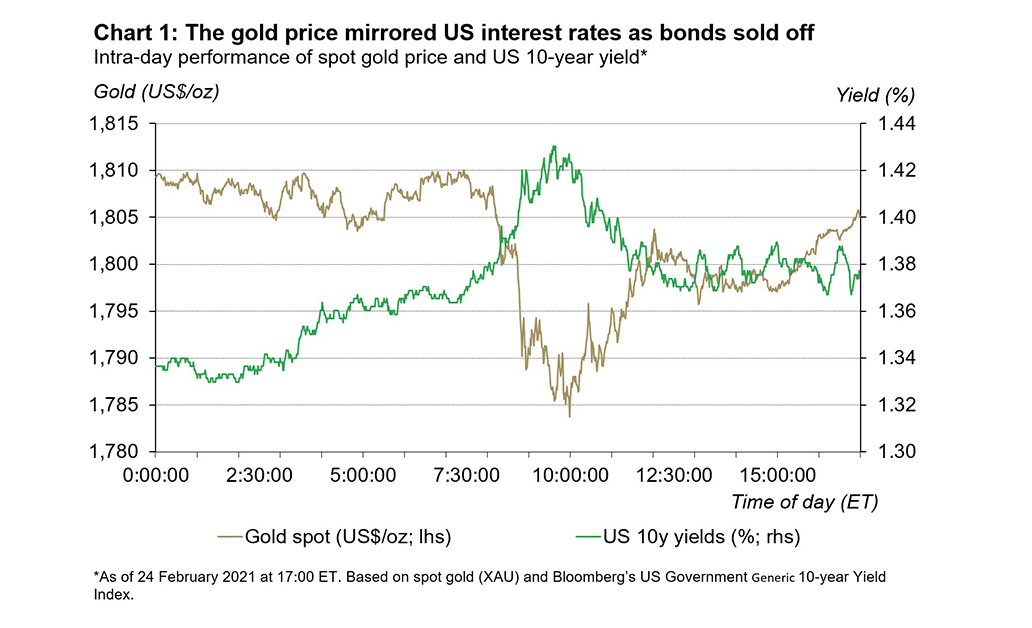 But the influence of interest rates on gold goes beyond the past 24 hours.

Rates have risen sharply in 2021

During 2020, gold benefited from the significant fall in interest rates worldwide. As rates reached historic lows and real rates across developed markets turned negative, the opportunity cost - relative to rates - of holding gold all but disappeared.

But as rates have moved higher in 2021 - particularly in February - this trend has reversed. For example, the US 10-year yield has risen from 1% in late January to over close to 1.4% at the time of writing.2 The recent move has been relatively sharp: it took almost five months for the US 10-year yield to move 40bps from 0.6% to 1%, but only a little more than one month to reach 1.4%.

In this context, gold’s 5% decline in the year-to-date3 can be explained in good part by the movement in rates (Chart 2). 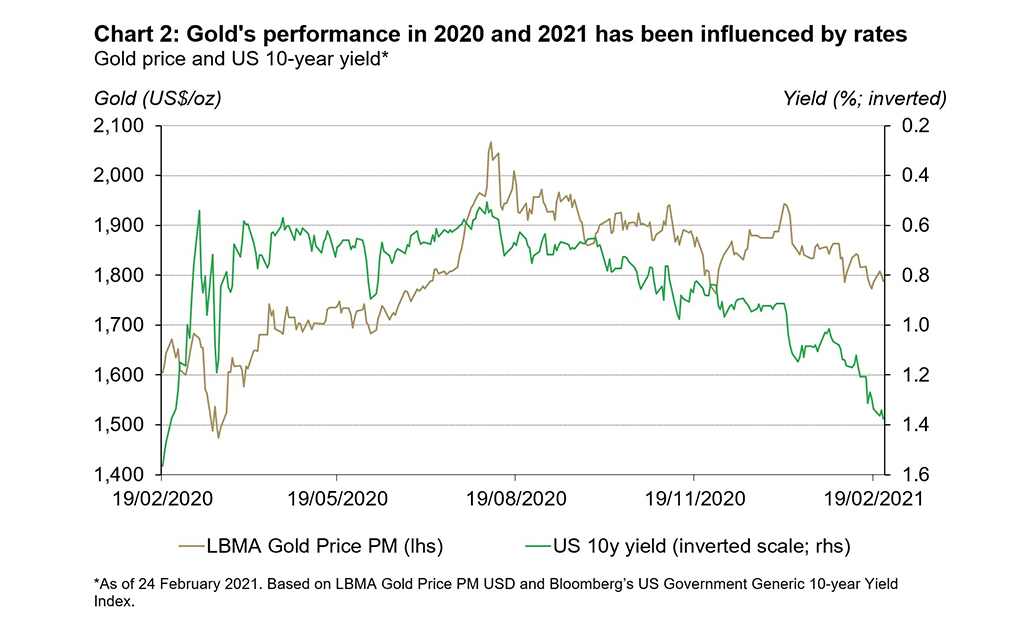 Much of the recent movement in rates can be linked to the so-called reflation trade. Real assets like homes, lumber, copper and oil have all moved sharply higher partly due to expectations of economic recovery, but also in anticipation of potentially higher inflation – especially given the large amounts of money that have been pumped into the economy.

It is likely that investors are positioning for a higher (non-seasonally adjusted) US Consumer Price Index (CPI) print during Q1. This could be partly due to the significant increase in oil prices which, in turn, make up a sizable component of the US CPI.

If history serves as a guide, and given that the year-on-year increase in the price will be measured against its near-zero level in late Q1 2020, we could see the US CPI in March shoot up to levels not seen in over a decade (Chart 3). This ‘base effect’ will likely be temporary, but it may nonetheless rattle markets.

Looking forward, however, an increase in money supply and the effect of fiscal stimulus could materialise in a more consistent higher inflation level. 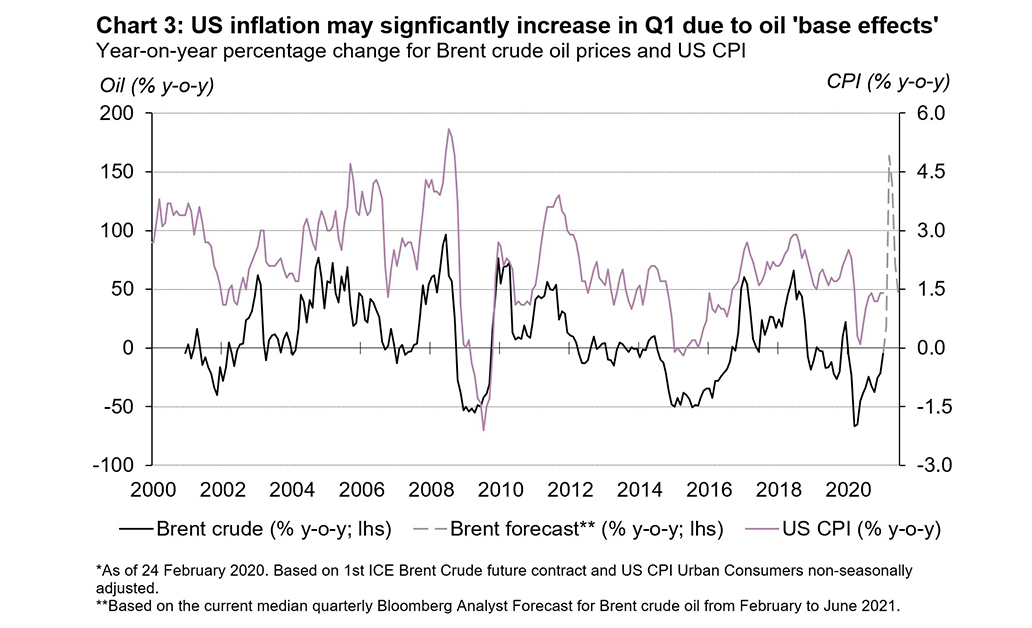 During his testimony to the US Congress, Fed Chair Jerome Powell highlighted that the recovery in housing, business investment and manufacturing has likely been driven by fiscal and monetary stimulus.

He also highlighted that monetary policy tightening – when it occurs – will not be solely linked to a strong labour market. Most importantly, he emphasised that inflation should exceed 2% for some time before the Fed will consider tightening.

For the time being, they expect to keep increasing their holdings of Treasuries and Agency mortgage-backed securities at the current pace through their asset purchase program.

What this means for gold

While higher interest rates may continue to pose headwinds for gold in the short and medium term, inflation expectations are also likely to move higher.

In addition, despite their recent increase, interest rates remain structurally low. This is reshaping asset allocation partly as investors search for yield and partly because, at such low levels, bonds may be less effective at providing the diversification investors may need in the event of equity market pullbacks.

This concern has prompted some investors to increase strategic allocations to gold, which continue to be seen through inflows in low-cost gold ETFs despite overall outflows in the gold ETF space during the month.

Adam Perlaky is a senior analyst at the World Gold Council.

You can find our independent comparative pricing for bullion, coins, and used 'scrap' in both US dollars and New Zealand dollars which are updated on a daily basis (restarting for 2021 on Monday) here »

If reduced demand for Gold Exposure drops prices to around USD $1300 and the NZD rises to around USD 0.78 cents - I might consider dollar-cost-averaging back into a gold position. Honestly, I'm just not feeling gold this year.

Gold has had a good run the past couple of years, especially in NZD terms - no denying the benefits of that. If gold hit USD $3000+ this year I imagine James Rickards will be trotted out and Peter Schiff will claim the ability to lay golden eggs.

I just don't see the point of investing in the old technology when I have Bitcoin. It is inevitable that Bitcoin will consume the majority of golds monetary market cap. Sure it will still be used for jewelry ect but not as a store of value. And then it will move on to eating the bond market.
Diversification is for people that haven't done enough research and don't have conviction :P
Like Michael Saylor says, Why would you sell Microsoft shares and "diversify" into dell etc when it is a winner takes all/majority game.