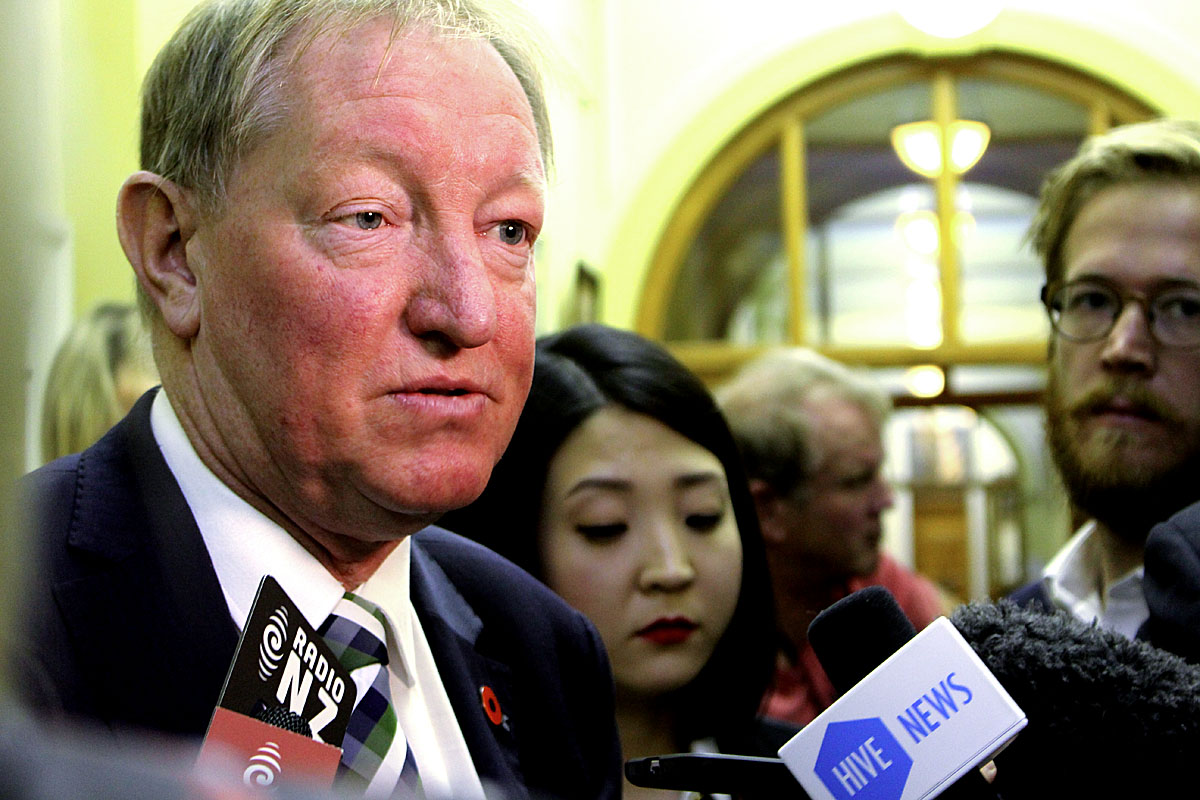 Finance Minister Bill English and Housing and Construction Minister Nick Smith have hinted Thursday's Budget 2015 could include new measures to free up Government land in Auckland to increase housing supply.

English was asked by reporters at his traditional pre-Budget visit to printing presses at Petone if there would be more measures to address Auckland housing in the Budget.

English said there would be a "bit more there" and confirmed there would be more steps around increasing housing supply "but I don't want to create any substantial expectations here."

"You could look at that in the Budget and say that's a small measure, but when you put together all the announcements over the last three or four months we have a very substantial programme on housing, focused on our top priority on increasing supply, including the Government redeveloping its own (houses and land)," English told reporters.

English and Smith announced on April 30 that the Government would lend the Tamaki Redevelopment Company NZ$200 million so it could ramp up development of Housing NZ houses and land at Glen Innes in Auckland to build a net new 5,000 houses, including some land and houses to be built and sold to private owners.

"You'll have to wait and see but you can expect to see more movement in that direction," he said of more Tamaki-style developments in Auckland. English has previously pointed out that the Government owned 7% of all land in Auckland.

Smith told reporters in Parliament the Government planned to announce more on housing in the Budget at 2pm on Thursday.

"The government has always said there is no single magic formula to getting on top of Auckland's housing challenges. We did things in last year's Budget, we've done things since, and we'll be doing some more on Thursday," he said.

Asked how much Government land was available in Auckland for redevelopment, he said: "I'll be pleased to share that information to you when the appropriate time comes up."

Smith was also asked about the potential for an announcement that competitors to councils could start providing building consents.

"I don't want to speculate on future announcements. You need to wait until Thursday," he said.

Asked if there was more planned for Auckland, he said: "You'll have to wait until Thursday. It's only two more days. Christmas is coming."

Both English and Key have downplayed expecations in recent weeks that the Budget would include significant new spending to address child poverty, despite raising expectations after the September election.

"So there will be some measures in the Budget, but again what I would say to you is, we already do a lot, although there is probably more we could do," Key said.

Green Co-Leader Metiria Turei said Key's comments suggested he had invented an entirely new measure of child poverty with much higher thresholds than accepted elsewhere in the Western World.

"John Key promised this budget would be a poverty circuit breaker, but his new ‘Oliver Twist’ definition of poverty means he is ignoring three quarters of those who are actually suffering," Turei said.

"The Budget is shaping up to be a trail of broken promises. First on reaching surplus and now on failure to address child poverty," she said.

“Poll after poll shows New Zealanders want to see action on child poverty, but instead of doing something meaningful for our kids, John Key’s pretending most of them don’t exist. That’s pathetic."

"The first thing they said after election day last year was that the child poverty and the issue of hardship would be their priority issue and that they would move on it, so it will be another broken promise if they don't do anything about it in this Budget," Little said.

Today is the seven week anniversary since the mid-point of the Auckland Housing Accord. There is still no sign of the monitoring report for the Jan-Mar quarter. By now it should just be a matter of plugging in the numbers into the existing format and publishing (two working days max?)

Of course if the numbers are really depressing as there is every sign they will be then maybe holding onto the report - which is a joint publication by government and AC - until the latest shiny baubles are offered up in the budget is about the best you can do.

"Smith was also asked about the potential for an announcement that competitors to councils could start providing building consents.

"I don't want to speculate on future announcements. You need to wait until Thursday," he said."

'Or, if you can't wait,' Smith continued, 'read Hansard from 1991 when, as first-term MP, I was happy to promote the Building Act which allowed for and still allows for anyone to set up as a registered Building Consenting Authority (provided they jump through the 3,000 hoops that put all the private consenting authorities out of business when the Act was amended in 2004).'

Imagine if the council had competition rather than a monopoly.....

Being a Building Consenting Authority is a terrible job. The government keeps the best bits for itself so the BCA's end up with all sorts of liabilities in return for SFA revenue. Councils wouldn't do it either if they weren't forced to by law.

Seriously the monopoly isn't statutory - anyone can register as a BCA today, has been able to for the last 24 years - it's just that no-one else wants to do it.

one question suddenly pops into my mind:

Is the model that NZ central and local governments are running scalable?

It is probably not by looking at the mess that AKL is in right now.

Oh yay more houses for the foreigners to buy as that is exactly what will happen to them, quite possibly, the bulk of them. Foreigners will hoover them up, then they'll rent them back to people who can't afford the rental on their wages, so the landlord will be able to pick up welfare disguised as accommodation supplements to their tenants.
We are idiots.
And again, I will call for residential housing to be removed from the Investor category for prospective immigrants, and then moving on from that I will continue to call for a ban on foreigners owning land in this country.

You just don't get it.

What's going on with this Tamaki Redevelopment Company - why are Nick Smith and Bill English majority shareholders on it?

Because it's 59% government owned;  http://www.interest.co.nz/property/75239/company-co-owned-government-auckland-council-take-charge-major-auckland-state-housing

I'd like to hear peoples thoughts on defining what "poverty" actually means?

The often quoted 250,000 refers to those who are with less than 50-60% of the median income. But that seems like an income measure not a poverty measure, No?

... when Grandpappy Gummy was a boy , poverty was being too poor to afford hessian sacks , from which to cut out and sew up your own shoes ....

In 2015 , poverty is being too poor to afford the latest hi-glo pump-up Nikes , so you can waltz into the WINZ office in style , to collect your entitlements ...

Actually mate, these guys walking into WINZ with Nike shoes are more likely than not getting them from the likes of myself and my friends, who give our Air Max, Pumps or whatever we no longer want to charity.

That's right, many young people give to charity - even when we can't afford our own home.

My charity of choice is the Auckland City Mission. What's your Gummy?

Charity and Family are old hat.
Government, tax and welfare are the replacement.
No longer do we have 'bums' we have homeless.. and so on.

Poverty is normally a single metric, and that is usually based on the adequacy or otherwise of household income to support the particular demographic composition of a household. So, for different household compositions different levels of income make up the 'poverty line'.

It is simplistic. I prefer a broader definition - which is 'vulnerability' - such as is used by our Dept of Stats here;

Which gives the following type of assessment;

But common to all medium and high risk households is low income - so the two issues (vulnerability and poverty) simply cannot be decoupled. The reality is, the stats assessment of vulnerability provides an even more alarming/concerning headline to my mind.

Poverty is having WINZ stump up the taxpayers money to raise rents. raise kids, raise the price of rentals, raise the barriers to an affordable house for those self same taxpayers. Who ironically could have afforded their own, if our Government lived in reality and taxed the idle rich speculating and leveraging the arse out of a slum landlords dream capital gain.

Yip I think this is a fair definition of poverty. The moment you need the government's help just to get by, you're being held out of poverty by the rest of us.

Do you really have to ask

Go to the nearest retirement village, or hospice, or wherever old people hang out, and seek out some real old-timers and ask them about walking (eeeek) to school barefoot, wearing hand-me-down clothes and eating lettuce-n-sugar sandwiches - a real treat

No different to today's Budget white bread and chip sandwiches (a pack of chips is cheap than cheese). In fact, at least lettuce has some nutrition.

Why don't you come down to the street I work on in the centre of the city and talk to the homeless people there about poverty?

One mans lettuce sandwich is an others special treat.

I'm sorry i wasn't clear. I know what doing it tough is.... but i'm referring to an appropriate definition for poverty which the government can use as both a yard stick and a measure for progress. Without one no one will be happy with any approach any govt takes with any spending.

One of my favourite sandwiches is Marmite and lettuce, with lots of margarine as well. But let's not kid ourselves - any/all food is unaffordable when you just don't have any money, or a line of credit.

on the face of it sounds ok, but my suspicious mind can see another rort to make traders, foreign owners richer
http://www.stuff.co.nz/life-style/home-property/68711802/thousands-of-ho...