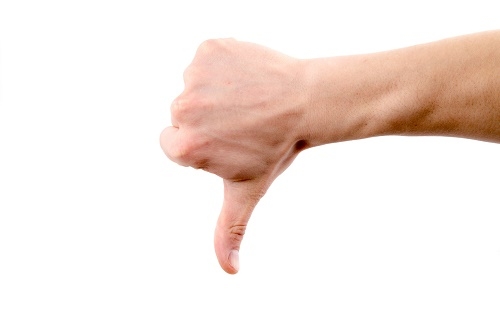 Amidst all the wailing and gnashing of teeth in the past three years about ever-rising house prices and what a BAD thing this is, there's been what might be termed a silent majority.

People have been, just quietly, it seems, actually happy that prices are going up. Since 2013 the quarterly BNZ Confidence Survey has been asking (though the question wasn't asked in 2015) respondents whether they are happy or unhappy with rising house prices. And, without TV cameras on them, or radio microphones up their noses, the respondents have, in the majority, admitted that, yep, rising houses prices, that's all good.

However, the tide has turned.

In the latest survey results out today, more people (albeit very slightly more) have responded that they aren't happy with the rising prices. But it should also be pointed out that the number of people 'indifferent' to house price rises was actually higher than either those happy or unhappy.

"So one can say that most people are not unhappy that house prices are rising – which is why politicians tread very carefully (generally) when they talk about what they would like to see house prices doing.

"Note however that the trend in this measure is downward and that this is the first time we have had more people unhappy than happy about house prices rising since we first asked this question in June 2013. We did not ask the question in 2015." 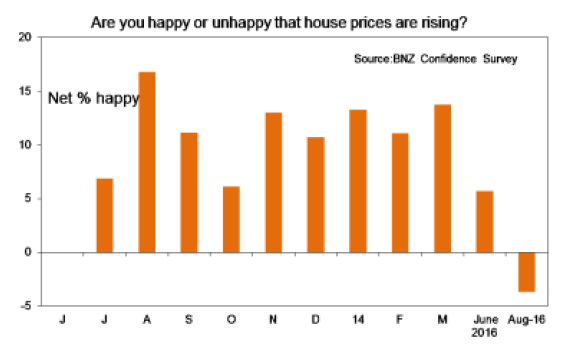 The BNZ Confidence Survey seeks the views of 14,000 recipients of Alexander's Weekly Overview newsletter. He said the latest survey elicited over 570 responses, the vast majority of which were positive.

"That [construction] sector is growing very strongly benefiting a wide range of businesses all over the country. Demand for commercial property space is strong with falling vacancies and yields, while in residential real estate listings shortages continue near everywhere."

Alexander said the Reserve Bank's recent proposals to strengthened loan to valuation requirements (40% minimum deposit for investors) were having an impact.

"...But some investors are pooling resources and sourcing second tier financing to get around the rule," he said. "...But overall the LVR rules are having a dampening effect. In Auckland fewer houses are selling at auctions."

"In farming dairying remains weak but with feelings that the worst has passed. Horticulture is strong as is tourism where capacity issues are becoming more important."

As usual Alexander has produced detailed extracted comments from survey respondents in a variety of industries. The real estate industry comments are interesting as they show that while the market remains firm in Auckland, there are some signs of it plateauing, while in other areas of the country such as in places like Wellington, Hawkes Bay, Palmerston North and Nelson all systems still seem to be very much go. Here are a few chosen comments:

"Real Estate Auckland - very flat and uncertain if the very low volumes will continue. Buyers have no urgency. Big change in the market dynamics from a year ago."

"Residential Real Estate, Central Auckland. Busy with new listings though still not as many as we need. Buyer numbers are definitely down but better quality buyers coming through open homes - not as many lookers. Prices holding firm, still the occasional wow price."

"Great, things are humming in Wellington. House prices are rising and should hit an annual rise 20%+ by end of the year. Multi flat properties are still going well in Wellington Central, the 60% LVR rules are being curtailed by 2nd tier lending and investors investing in groups. There's no stopping it."

"Real Estate - Auckland North Shore: Listings starting to flow through now, but the proposed changes to the investor LVR have already taken effect and dampened the market, Asian buyers struggling to get funds out of China and the local banks excluding overseas income earned relating to lending has quietened down the Asian market a little too. Reminds me of October last year when the market took a 'breather' then bounced back again early this year."

"Residential property - the LVR restrictions seemed to initially make people stop and think, however after the rate announcement things have picked up again. Houses we are selling are not selling as fast as they were this time last year, however are still selling reasonably quickly and for good prices."

Perhaps if they had pre qualified their subjects by asking them if they realised rising house prices today is stealing from their children and grand children tomorrow.

Yep, I bet a bunch of home owners just realised their kids are never going to afford to leave home.

No surprises there, the higher house prices go, the less the number of people who can afford to buy and hence this.

"My logic was that maybe we could tell patients upfront that placebos may work and tell them to give it a try.” The results were startling: 59% of patients who knowingly took sugar pills reported adequate relief from their symptoms, compared with 35% in the no-treatment group — better than most IBS drugs, he adds. “I was very surprised by the results,” says Kaptchuk, “even though I hoped it would work.”

Did a whole lot of people just hear John Key say prices are rising too fast? what a bunch of sheep

Vancouver tax and the shocking results - that's what happened.

the biggest losers from this sudden, dramatic price collapse, were foreign buyers, mostly the Chinese, whose aggressive, "buy at any price" money laundering "purchase tactics" have been duly documented on this website for the past year

Does anyone really believes John Key.

Real shame but are shameless in their arrogance

Too many indifferent people - don't be a no balls key

My god, is there a glimmer of intelligence starting to show in New Zealand?

Nope. 58% still think that NZ is heading in the right direction.

Full steam ahead with no borders and foreign ownership.

You are almost correct only 34% of respondents above thought there was a problem. Funny how you can twist statistics. The rest thought there was either great or they didn't care which means they didn't have a problem with it. Fact is anyone now with a house or especially multiple houses is on cloud 9. The vast majority of these people will have no issues, kids or no kids it just means you will have to seriously downsize and move to Tauranga and split the remaining $1M in cash between your kids for a house deposit. The remainder are going to keep screaming ponzi scheme and renting all the way to the government funded rest home.

did not have a problem with it or over it, sick of hearing about it at the BBQ etc
I would not count them all as in the for rises category But split and don't care, that is why they are not counted.
same as voters that wont vote.

John is comfortable. Seems they will not govern on difficult issues. What can we do with them? How about an a- political group focused on solutions that the incumbent Gov re-fuses to govern on?

I agree, sometimes you need to slow down and enjoy the view. Take a break before moving on.

So Mr Hargreaves ... out of the tons of positive news and sentiments in this report you selected and highlighted only the negative comments which are taken out of the contest of each subject ...is that hoping that the title of your piece would serve its purpose as no one will bother reading the report??

here is the conclusion from the report against what you want us to believe in your Title:

did you miss that Sir? .... "So one can say that most people are not unhappy that house prices are rising " !!

Maybe you'd like to leave the conclusion to us the poor readers rather than doing it yourself !!