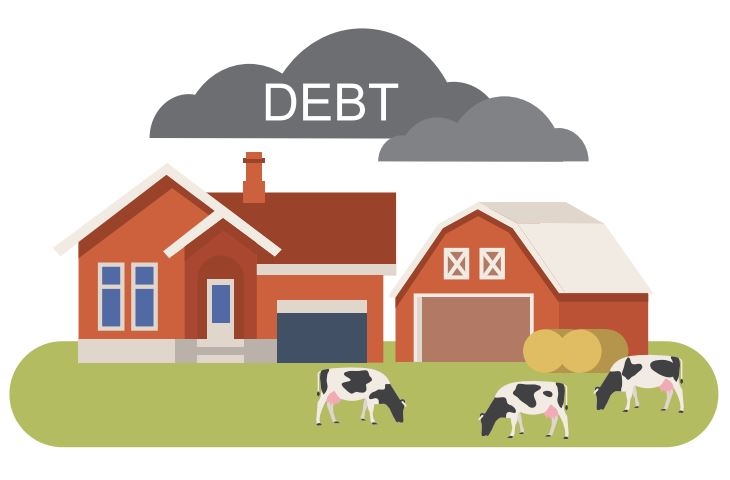 The Farm Debt Mediation Bill passed its final reading in Parliament on Tuesday night, facilitating mediation between bank lenders and their farmer borrowers in an effort to resolve issues before enforcement action may be taken by banks.

NZ First primary industries spokesman Mark Patterson says the Farm Debt Mediation Act has been 20 years in the making, during which time total farm debt has surged from $11.7 billion to more than $63 billion.

“New Zealand First has always understood that a farm isn’t just a business. Oftentimes, it’s a family home and the pride of generations of farmers. This bill will ensure all options are explored to turn around a failing farm business, introducing a mediation step to help resolve debt issues before enforcement action is taken," says Patterson.

“Our farmers are uniquely vulnerable to the volatilities of commodity markets, biosecurity incursions and weather events, and many are having to borrow to manage that volatility. The consequences of these pressures on our rural communities are clear. A recent Federated Farmers survey found that the number of farmers feeling pressured by their bank grew from 11% to 16% between November 2018 to May 2019."

“The mediation step this bill provides for will require banks to work with farmers to find a way forward, and ensure they are not simply left in the lurch when the banks come calling. It will help farmers avoid the worst-case scenario of not being able to pass their farms down to future generations, or for those with non-viable businesses, exit with dignity,” Patterson says.

In its recent Financial Stability Report the Reserve Bank said the dairy farming sector has limited options to address its "overhang" of debt despite the fact that the current low interest rates should help many farmers to pay down debt. As at the end of September agricultural debt totalled nearly $63.7 billion, about 14% of total financial system lending, of which just under two-thirds was held by the dairy sector.

Federated Farmers vice-president Andrew Hoggard acknowledged the work of NZ First, Patterson, Agriculture Minister Damien O’Connor and government officials in developing the farm debt mediation legislation, which he says should help "facilitate better conversations between farmers and their banks and if necessary a more structured way to address problems."

"As Mark Patterson noted in last night’s debate, the legislation is not a 'get out of jail free card,' and won’t absolve farmers who make poor financial decisions. But it does go some way to addressing the power imbalance between a farmer whose business is also their livelihood and often the family home, and major multinational financial institutions. There’s now a process that ensures some fairness and transparency," Hoggard says.

The new legislation is scheduled to go live next June 2020 with the Ministry for Primary Industries putting the architecture for it in place.

20 years to get it over the line WOW NZF talk about fast tracking..
All glimmer and sparkle but no teeth.
Where does the money come from? i.e. banks are short on cash to lend due to the low interest rates. So NZF plans to help the 'Red Necks' in a mediation process but at the end of the day the banks won't be able to lend as they are struggling to have enough cash to keep the domestic houseing market liquid.
NZF is now in the full Jacinda grip of look at us we are doing something that we are not going to measure to see if we actually deliver.

NZF's has crapped on it's supporter base and are struggling to find something to gain them back. Sorry Winny but the damage has been done and trust is out the back door now.

You are aware that other governments were in power over the last 20 years too, I assume?

However, I'm sure it's all Jacinda's fault. Naturally.

Strangely, I had the impression at the last election that farmers didn't want a bar of Jacinda's "communism", yet here we are with the government looking to help farmers out...

What about locking up some of the bankster salespeople, who talked farmers into taking on too much debt.

No one held a gun to these farmers head when they signed up for the loans. If someone has taken on too much debt then that's their problem and their responsibility.

Conversely, if the banks have lent too much to people who are already heavily indebted they should be the ones holding the bag if they go bankrupt.

Have you had experience as a rural borrower?

Totally agree, they borrowed the money, they take the risk.
Alternatively introduce capital gains tax on these farms, then the tax of some, can pay for the mismanagement of others.