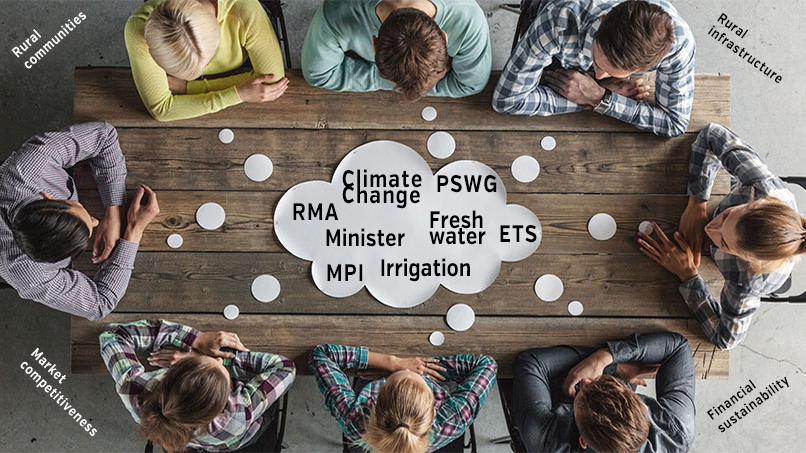 The dust is beginning to settle after the weekend election results. The magnitude of the Labour result and arguably that of ACT and the Greens has been as much a surprise as the poor performance of National.

Fed Farmers among others have said that many farmers voted Labour as an insurance to keep the Greens from gaining too much control. A likely scenario? Maybe, although a bit too cynical approach even for me to contemplate.

Although having said that, I know of several younger voters who voted Green to make sure that Labour got a nudge further in the direction of doing something more about climate change and social issues.

Whatever the drivers, New Zealand’s political spectrum has taken a major lean to the left. Even much of the National Party’s policy seemed to be heading that direction.

The ACT Party, who while they certainly appear to support the ‘rights’ of the individual at the expense of society, from what we have seen to date they are far off from being near the extreme side of right.

The same could not be said about Advance NZ and the New Conservative Party. Given the increasing noise coming from the right in overseas countries it was possible that a similar rise may have taken place in New Zealand. It was however, refreshing to see that the New Zealand electorate was not suckered in by the ‘crap’ that came from these parties and it speaks volumes of the maturity and plain common sense that encompasses the New Zealand population (the 2% aside).

How far left New Zealand has moved is yet to be tested. There is an irony that many of the more left leaning European countries with strong social and environmental policies also have quite strong right wings in their politics. Perhaps it is because of the more leftist policies that brings out the right in some people. Only time will tell in New Zealand.

With the large increase in numbers in the Labour caucus, I have been dredging around trying to see if there is an obvious successor to Damian O’Connor as Minister of Primary Industries. He, while seemingly to be a decent person (most people are) has never set the world alight as Minister for Ag. Kieran McAnulty while apparently able to relate to the rural sector, judging by recent TV appearances, doesn’t have any real background in agriculture. So, due to the lack of an obvious candidate to replace O’Connor some close consultation with farming and ag sector leaders will be required. Ardern does appear to favour a more consensus style of government; lets hope that continues to extend to agriculture as I don’t feel confident O’Connor will be a strong advocate for the sector when the going gets rough.

Why do I think this is important? In this next electoral term the detail around much of what was done as the groundwork in the last will get created. A large part of this will focus on agriculture and the environment.

To start with we have the review of the RMA. Through the elections most conversations were about the negative impact the RMA is having on getting the necessary number of houses built and the additional costs involved. However, as many farmers know, the RMA already has had a large impact on planning - mostly slowing down development. It is going to be interesting to see what details come out in the revised alternatives.

With the desired outcomes aimed to reduce cost and speed up the process it would sound like thresholds to comply may be reduced. However, with the Greens nipping at Government’s heels especially around farming and water use and quality we may see more constraints on decisions on resource use making trying to keep all parties satisfied difficult, farming not the least.

The Greens have a far more 'ambitious' view of the future of farming (ambitious may not be the best term to use depending upon where readers sit) and the things that need to be done to get there.

Labour will also struggle to find the experience, and talent, to fill all ministry leadership positions especially in the area of the environment and climate change. Therefore, the Greens may be invited fill some spots. Names that have been mentioned are James Shaw, Marama Davidson, Julie Anne Genter and (heaven forbid) Eugenie Sage. The issue I have with Ms Sage is that she always has appeared to be too sure she is right, and this does not lead to good consultation.

Chloe Swarbrick has also been mentioned as a starter as an Under Secretary given her growing experience in Parliament and what seems to be a good work ethic and nose for politics.

So, looking at say irrigation which is going to become more critical given climate change and while there appears to be a growing recognition that saved irrigation water is not the ogre that it has been made out to be (scale aside) and therefore planning permission should be easier to achieve, assuming RMA reforms work, there is the hurdle of the Greens to appease and this will be the great unknown.

Already signalled under the last government are the deadlines to be met to satisfy the expectation of the Zero Carbon Act framework.

The Climate Change Commission has until the end of May 2021 to present their draft before Parliament. This will cover the next 3 Five Year emission budgets to achieve the goal of net zero carbon emissions by 2050.

The agricultural sector is represented by the Primary Sector Working Group. They are currently working on and by all accounts making reasonable progress on providing recommendations on the vexed questions of how best to measure price for emissions and then how to manage these emissions. This needs to be applicable by 2025.

If ‘reasonable’ progress is not made in the current and next year, then the threat is that agriculture will be drawn into the ETS by 2022. So, plenty to watch out for in the years ahead.

Despite competing for farm produce (that is, meat and milk among others) the ag sector does have a history of being able to work together. In the years ahead this ability will be as important as it ever has been. One week into the new term and there is the prospect of an interesting period ahead. But then when hasn’t there been one?

"there is the hurdle of the Greens to appease" - um, no. Labour can govern alone, and the Greens are outski in terms of their history with Sage and Genter - zealots both. Labour has said it wants policies that are 'sticky', which being translated means 'we don't wanna get kicked to the kerb in 2023'. So they will likely tread carefully, given that Ag is the main export earner and that international tourism and education are not gonna come roaring back soon, if ever. Your point about the lack of depth is valid, but people can grow into a job if they are prepared to play nicely with others. Glass half full.....

Kieran McAnulty would be a good fit. He's a relationship builder and just won a rural electorate seat on his own merits working on the ground. He's got to be the go for the agriculture portfolio. I'd retain Damien in Biosecurity to finish the outstanding issues there.

Surely the sensible approach is (a) adapt/change farming and horticulture to be drought resistant, then look at whether there is benefit in supplementary (low scale) water storage and irrigation.

Instead it looks like the way to address deeper and longer droughts being promoted by irrigation interests is keep farming and horticulture business as usual, save adding heaps more irrigation.

Andrew, are you sure?

IPCC/SREX: “There is ‘low confidence’ in detection and attribution in changes in drought over global land areas since the mid-20th century. (1)

Given the nature of miss truths.
& ease in which alternative realities are peddled
And the office heald by such peddlers...

MBIE deputy chief executive of corporate, governance and Information Richard Griffiths, said its IT staff were not caught flat-footed.

That was despite 3800 of its 5500 staff only having access to old Windows 7 systems that would not work properly for those trying to work from home for most of the first month of lockdown.

"They did a stunning job, considering," Griffiths said.

Yes Henry, I am sure.

You have tried to cherry pick using an out of context quote global allegedly from one of the IPCC assessments.

My longer, deeper droughts statement comes from regional assessments of climate change impacts, including from the 4th and 5th IPCC reports.

The latest Ministry for the Environment report states:
Droughts are projected to increase in severity and frequency in many areas due to a combination of rising temperatures and changes to rainfall. This will be most pronounced in areas that are already drier, like many eastern areas (MfE, 2018a). Longer periods of drought could affect native forests by causing trees to die, shifting the makeup of a plant community towards more drought tolerant species, and increasing the risk of wildfires.
https://www.mfe.govt.nz/publications/environmental-reporting/our-atmosph... (text just after figure 25)

And a summary of a recent NIWA climate projections of New Zealand report: https://www.mfe.govt.nz/sites/default/files/media/Climate%20Change/clima...

Many industrial applications are still running windows 3.2 , entirely adequate when you don't need graphics etc , mainly needed for gaming and social media type applications.
I assume most of their accounting and word processing software continued to work fine on windows 7, it was probably the "zoom" type stuff it struggled with. Probably desirable these days , but I don't think they mean they struggled with their actual computer work.

Of course , few people would not use any water at all in their garden / farming . To use the garden e.g , there is a huge different to having a mulched / no dig garden, with a small amount of water applied when prudent / necessary , to a garden with sprinklers going all day , every day.

"It was however, refreshing to see that the New Zealand electorate was not suckered in by the ‘crap’ that came from these parties and it speaks volumes of the maturity and plain common sense that encompasses the New Zealand population (the 2% aside)." Amen to that!