Farmers turn less optimistic despite good market and product signals, mainly because of adverse government policy and a view the economy will deteriorate from here. Rising costs aren't helping, but the new visa release does

Rural News
Farmers turn less optimistic despite good market and product signals, mainly because of adverse government policy and a view the economy will deteriorate from here. Rising costs aren't helping, but the new visa release does 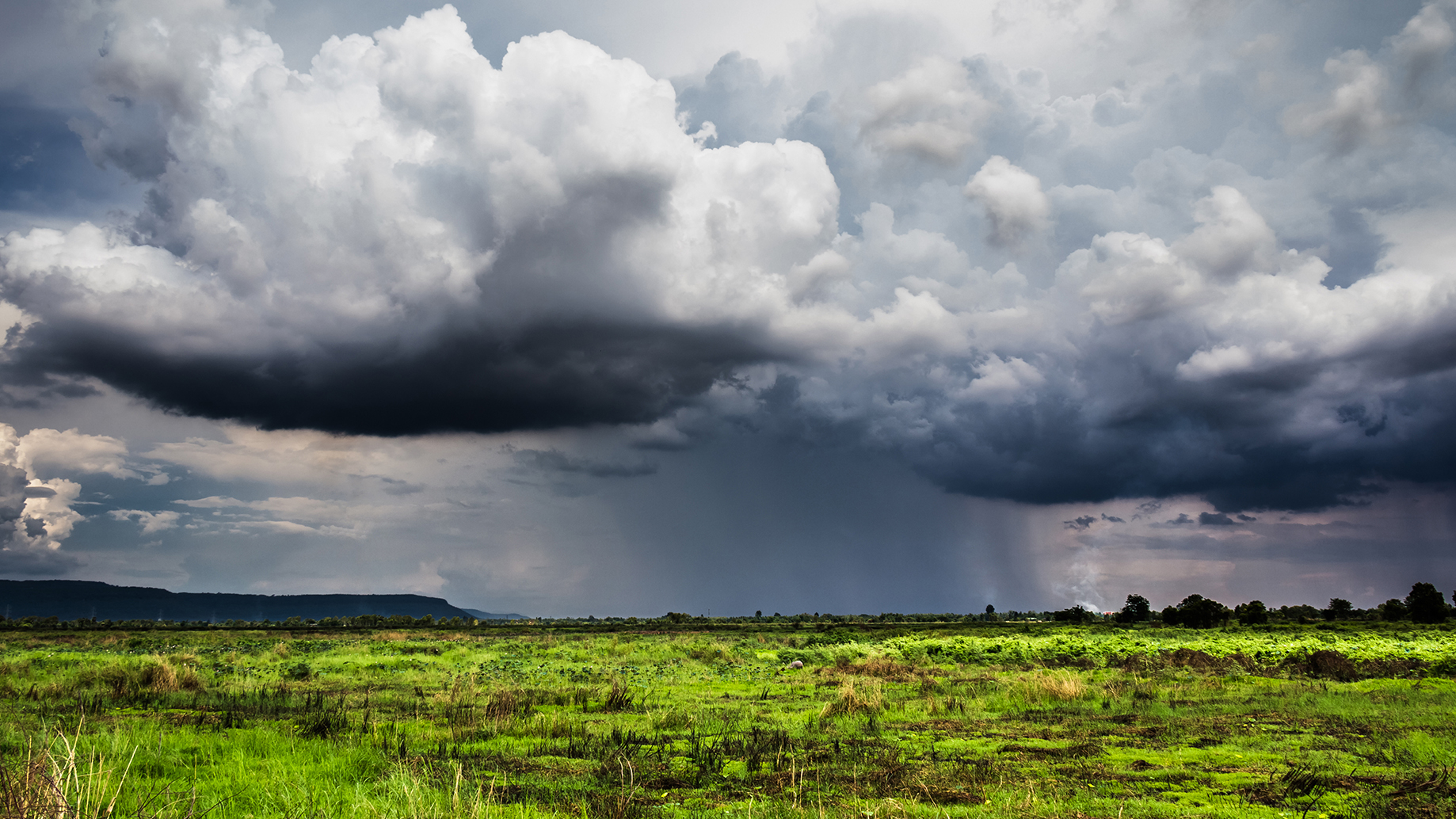 Rabobank have just released their quarterly report on farmer confidence. It is based upon a survey of 450 farmers who are selected across the range of agricultural types the report covers the 3rd quarter of the year.

After being on the positive side of the scale in the previous three quarters, overall farmers have dipped into negative territory in the latest survey.

However, the headline view colours the detail somewhat and while dairy farmers are looking into the future through somewhat gloomy optics, sheep and beef farmers are slightly more upbeat.

Although the latest GDT auction was positive the successive falls previously through the quarter has weighed dairy farmers down and the survey looks to have occurred before the latest rise.

The majority of farmers (75%) believe that there is going to an increase, from a farming perspective, in adverse government policy. This is given as a major reason by farmers as to their increased pessimistic outlook. Despite agricultural products being in strong demand, threats from government policy plus increases in input costs have overridden the product price strength.

These issues were also mentioned in the previous survey but have increased in their prominence this time around and are now at the highest levels seen in the last 10 years.

When it came to on farm investment, the sheep and beef sector showed the greatest inclination to spend although all sectors are in positive territory. Horticulturalists are now back into positive territory with their outlook after several quarters in the negative. Perhaps the RSE labour issues getting resolved has driven this.

The news of those with longer term work visas being able to apply for permanent residence status will be welcome by all employers and agriculture is no exception with most farm job positions now on the “Primary Scarcity Roles”.

It’s worth noting that this one-off initiative does not apply to “short term visa holders”.

The survey contained no mention of the impacts of climate change; however, the lower expectations of farm performance in the year ahead may have been made with climate in mind. While overall results are back on previous quarters this year the graph below shows that they are well ahead of where the agricultural sector were at the same time last year when uncertainty was rife. Ironically, at the same time the agricultural sector confidence has weakened overall business confidence has improved (be it still in the negatives). 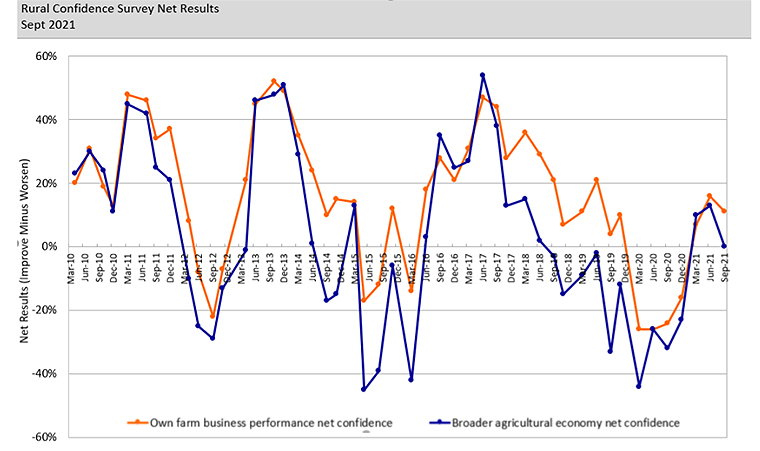 Several firms in the agricultural sector have benefited from the Government's decarbonisation funding (GIDI). Overall 23 projects to move industry away from fossil fuels which are said to equal to taking 46,000 cars off the road or reduce by 7% of gross long-lived emissions savings required by Climate Commission in first draft budget period. Within the agricultural sector the major projects include:

Meadow Mushrooms’ GIDI-funded project will replace a diesel boiler with a domestically sourced electrode boiler, which will further halve their carbon footprint.

Although not part of GIDI fund, Fonterra has reported an 11% reduction in greenhouse gas emissions from coal in the 2021 financial year, mainly due to an energy conversion at a single manufacturing site. Chief operating officer Fraser Whineray said the reduction was achieved primarily through the switch from coal to renewable wood pellets at Fonterra's Te Awamutu site in Waikato,and was a great step towards delivering the big cooperative's 2030 target, and goal of getting out of coal by 2037.

In an update for the current GHG reporting period the latest update (April this year): “New Zealand is projected to meet its unconditional 2020 emissions reduction target by using 109.2 million units from forestry activities and 23.1 million units carried over from the first commitment period (CP1)”. A perhaps surprising result given the negative tone being levelled at agriculture and other emitters.

A footnote that may have passed readers by. Zespri have reported sales have continued with little negative effects and with no sign of Covid after a testing scare. Given the fruit was packed in New Zealand in May any link to New Zealand seemed highly dubious.

"Fonterra has reported an 11% reduction in greenhouse gas emissions from coal in the 2021 financial year, mainly due to an energy conversion at a single manufacturing site."

Because of the careful wording of this statement, I would bet that this figure of 11% makes no allowance for all the carbon emitted in supplying the pellets:

It is amazing how everything is spun to to con the general public and green wash the company.

It's an interesting tightrope; pat them on the back to encourage more moves, or rubbish them for greenwash. At the end of the day, every advancement is a bonus but we will inevitably run out of time. Beyond that readjustment, who knows where industrial Ag goes? Local, small, regenerative is my pick.

Have you asked Fonterra how the 11 % is worked out? you mention trucking the pellets , but apparently coal magically appears at the dairy factory . you seem to have presented this post as fact , when it is your assumption.

That is why I mentinned that there will be at least 33% more truck deliveries because of the energy density diference.

Not likely , because it is weight that governs how much a truck can carry , not density. The same weight of wood pellets will need a bigger capacity truck , but the weight will be similar.

No - it would need commensurately more trucks

I built a new home 14 years ago and installed a wood chip/ pellet boiler for central heating in the deep south. What a disaster. I  burnt a truck load of wood chip in 12 days! Pellets were no better.  Let alone getting dry product it was just plain stupid. Luckily  with a  couple of minor mods it actually runs really well on pea sized coal. A truck load lasts for 9 months and it heats my spa pool hot water and even has peltier generators to generated electricity from some of the waste heat.

Wood chips/ pellets are a waste of time!

Probably a bit of doom and gloom with some kiwifruit growers. Hi Cane is set to be banned.

Will likely phase out over 10 years and should have been banned 30 years ago but maybe better late than never.

I won't be surprised food prices will continue to escalate.

Hopefully, The use of electricity  to make steam / heat water will evolve to more of a heat pump system , rather than resistance (electrode heaters). Using waste heat from refrigeration would be good at the meatworks, whilst interseasonal storage of heat / cold will help where freezing temperatures are encountered.

Farmers are upset at the rate of change , yet most would know the change is both necessary , and inevitable. It has been signalled for a long time , and they just need to bite the bullet and adapt.

I won't be surprised if Shaw comes back from Glasgow with higher sense of urgency, the targets will be the same , but they will be looking for definite plans to meet them.

It is inevitable that methane emissions will have to reduced by more than, and faster than, the levels in the Climate Change Response Act, given the push from USA and the EU for a 30% reduction by 2030, the real threat of climate levies on our exports if we don't reduce agricultural methane emissions at a faster rate, and the short term effect on climate change from bigger reductions in methane.

I am hoping the whole world will give each other a boot in the backside at Glasgow. Vital we are there to negotiate in our best interests.

Interesting, innit, that in one small article there is 31MW of hot water boiler conversions mentioned, with more to come.  Now, current (sorry) SI generation is of the order of 3GW.  So there is capability of converting just 200 such boilers in the Mainland, leaving zilch for other users such as cities, irrigation, and electro-convulsive-therapies.  Checks arithmetic:. 200 X 15MW = 3000MW or 3 GW.

Perhaps a Hmmm moment is needed......

There is probably only around 20-30 steam plants that large in the south island. All assumptions are on the demise of Tiwai point , not gauranteed, Ali hit its top price in years today.

Electrode boilers are the easy way to go using current technology. Some form of heat pump or heat transfer technology is the way they need to go for future use. Plus looking at wether they need steam at all. Often steam is used to make hot water, or lower temp processes, a wasteful process of heating water up in order to cool it down. Plus many food processing places have large refrigeration plants , producing a lot of waste heat that could be used to heat water. Plus recovery of heat from waste water.

One problem food industries face is the need to hit certain water temperatures for sanistation and sterlising purposes. Often that is why they will use steam heat cooled down to reach a temp , rather than water heated up . I did my apprenticeship in a freezing works , the 1910 era boilers caused some angst when we struggled to keep the knife sterlising water up to 71 Degrees. but that hot water went straight down the road with no attempt at heat recovery.