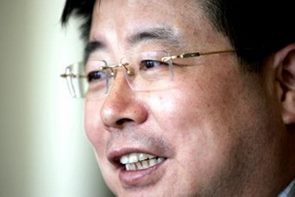 The application has been lodged through Pengxin's subsidiary, Milk New Zealand Holdings Ltd.

"We ran a comprehensive sales campaign and the Pengxin offer was by far the best," said KordaMentha's Brendon Gibson.

"We hope the OIO application receives a successful and timely response so we can proceed with the next steps in the sale process."

KordaMentha accepted Pengxin's offer - pending OIO approval - for 16 central North Island farms in January after fellow Chinese group UBNZ Funds Management withdrew its conditional offer having failed to secure OIO support. KordaMentha's Michael Stiassny told interest.co.nz at the time that Pengxin's offer was less than UBNZ's, which was believed to be worth about NZ$213 million, but "significantly higher" than other offers.

Pengxin's chairman, Jiang Zhaobai, is listed at number 293 on last year's Forbes' 400 Richest Chinese list with assets of US$550 million. He is reported to be 47 and a Shanghai property developer.

UBNZ and sister company Natural Dairy Holding's bid for the Crafar farms was rejected by the Government on 'good character' grounds in December after its front woman May Wang was bankrupted. The Serious Fraud Office is investigating transactions between Natural Dairy Holdings and UBNZ based on information received from the OIO.

The Crafar farms group was put into receivership in October 2009 owing about NZ$216 million to its lenders Westpac, Rabobank and PGG Wrightson Finance after interest.co.nz revealed animal welfare issues at the farms.

Later,Shanghai Pengxin issued a statement saying it planned to increase milk production from the Crafar Farms by 10% and wanted to capture a bigger share of the Chinese market with branded, dairy-based consumer products. It said it planned to spend more than NZ$200 million to buy and upgrade the farms. It then planned to invest a further NZ$100 million on marketing cheeses, ice creams and baby formula for the Chinese market.

Here is the rest of their statement here:

In doing so it will invest in upgrading the farms, employ more New Zealanders and work co-operatively with New Zealand dairy plants to create and manufacture products such as baby food, cheeses and ice creams that will appeal to the fast-growing Chinese and other Asian markets.

Shanghai Pengxin Group is a successful conglomerate, founded about 15 years ago, with significant investments in commercial and residential real estate, infrastructure, mining, finance and agriculture, and increasing involvement outside China. It is building up sheep breeding operations in China and plans to have flocks totalling three million within five years. Since 2005 it has had a controlling interest in a large-scale farming operation in Bolivia producing sorghum, soybeans and corn and is negotiating further farming investments in Argentina and Cambodia.

Milk New Zealand has this week lodged an application with the Overseas Investment Office for approval to purchase the farms. Capital to fund the purchase of the farms and other related assets will be provided by a shareholder advance from Shanghai Pengxin Group.

The initial commitment, once approval has been received, is an investment of more than NZ$200 million in buying the properties and related assets and upgrading the farms in the first two years.

Milk New Zealand Farming Ltd will be responsible for day-to-day management of the farming operations. Two of the three directors will be New Zealanders with appropriate experience in the dairy industry.

The company will also work with New Zealand processors to develop, manufacture and export a range of added- value, dairy based products to be marketed in China and elsewhere in Asia.

Mr Allan says the company would prefer to work in partnership with New Zealand processors rather than establish a new facility.


“There are a number of winners under this overall scenario,” said Mr Allan. “The country gains significant overseas investment, spending on upgrading the properties from a production and environmental perspective will benefit local communities and suppliers, more milk will be available for export and --as soon as processing arrangements are in place -- New Zealand can benefit from supplying the Asian market with new added- value products.

“Having a strong friend in China, now the world’s second largest economy, could have many advantages for New Zealand,” said Mr Allan.”In time, the Shanghai Pengxin Group may be interested in other investments in New Zealand, as well as seeing opportunities to use its connections and local knowledge to help New Zealand organisations export various products to China and other Asian countries.”

Shanghai Pengxin Group has established the MOY Global Innovate Enterprise Centre to assist companies wishing to break into the Chinese market, providing contacts, local knowledge, access to capital, a Shanghai base from which to work and other assistance. American companies are already using this resource , which can also be accessed by New Zealand businesses wanting to do business in China.

(Updated with background, detail from Pengxin)

"In doing so it will invest in upgrading the farms, employ more New Zealanders and work co-operatively with New Zealand dairy plants to create and manufacture products"

"Products such as baby formula, ice cream, cheeses and others, would be created"

"Manufacturing and exporting will create more employment in New Zealand"

How many new jobs will really be created?  Will manufacturing/value adding really be done in NZ - it doesn't happen with our timber.  How many new baby formula, ice cream, and cheese products can be created in addition to existing products?  The marketing money won't be spent in NZ will it?  What happens if/when the commodity bubble pops?

The main question though - what benefit to NZ in selling our land to foreigners?  We are constantly being told we need foreign investment - to me that means new business, not the selling of existing businesses and land.

And one thing that I am concerned about too, if you're talking about increaseing milk production by 10%, and that is the welfare of the animals. Cows aren't factories, they are living creatures and when it comes to animal welfare, could the Chinese (based on their culture/history) actually set the bar any lower? I don't want to see their profits coming from the suffering of a lot of livestock.

FYI, the Greens are not too happy about this...

The Shanghai Pengxin International Group will have to prove to the Overseas Investment Office that its bid for the Crafar farms is in New Zealand’s economic interests.

“Companies in China – often with government backing – are looking to buy up land and farming goods worldwide,” said Dr Norman.

“While this plan makes excellent sense for China, it is certainly not in New Zealand’s long term interests that our farms and farming companies fall into overseas ownership.

“The Key Government’s tweaking of our overseas investment rules last year did not stop New Zealand’s productive land from being flogged off overseas,” said Dr Norman.

“The solution to losing control of NZ Inc would have been to keep the privilege of ownership of New Zealand land for New Zealand citizens, permanent residents and companies.”

the main beneficiaries of this sale are the banks who foolishly lent money to the crafars, and the receivers who are employed to get top dollar for the assets.

Hence the oio and why the Govn has to take a lead on this...

But how effective is the Overseas Investment Act in the first place?  Tegel and large chunks of forestry land being sold to foreigners recently.  What real benefit to NZ?  They will just be traded to another foreigner in a few years after the owners have taken all they can from it.

Why not put our whole country/govt on the block and market it as a commodity?

A simple solution would to permit overseas interests to "lease" the land on 50 year leases and not acquire outright title. You would soon determine whether their interest is in the "business" or the "land"

yeah i'd probably go for that one ico

Economies, which aren’t structured, but unbalanced without strategy fail and are the victims of predators. The complete sale out of Aotearoa is only a matter of time. Kiwis cannot compete.

Think it through strategically. The chinese buy the farms, produce the milk, run it at cost, ship the milk to the May Wang owned milk  processor in Tauranga, run at cost, produce UHT milk and milk powder, load it into chinese owned containers, then load it onto chinese owned container vessels and ship it to china. Using international transfer pricing all the profits will be made in china. Where is the benefit to New Zealand? You will have sold some locally generated electricity running the show, using imported petrol transporting the milk to the processor, and some locals will have earned some wages (assuming locals are employed) and paid some paye, and the local councils will have earned some rates. There wont be any taxes to pay because there will be no NZ domiciled profits. Show me where the benefits will be.

This is nothing more than a bank bailout. Locals would buy these farms but not at the price the banks need to recover debts.

Lets get honest, this is just another case of the banks coming before the people.

If the Chinese take profits offshore then thats just good business for them, the idiots are our so called 'leaders' selling off the family silver.