Fonterra has retained its $4.70 milk price forecast but has dropped its projected dividend to a possible low of 20c from 25c after results 'below farmers' expectations'

Fonterra has retained its $4.70 milk price forecast but has dropped its projected dividend to a possible low of 20c from 25c after results 'below farmers' expectations' 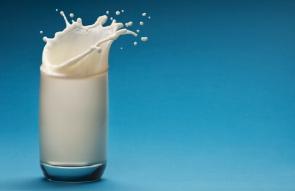 The body representing Fonterra's farmer shareholders says it is "disappointed" by the announced lowering by Fonterra of its dividend forecast.

Fonterra says it is retaining its forecast milk price for the current season of $4.70 per kgMS, but is reducing its forecast dividend to possibly as low as 20c from a previous low forecast of 25c on the back of  half-year results "below our farmers' expectations".

Fonterra Shareholders’ Council Chairman, Ian Brown said farmers would be disappointed with today’s announced interim dividend of 10 cents per share and forecast range of 20-30 cents per share for the 2014/15 season especially given the current Milk Price.

It was a positive that Fonterra had maintained its forecast for the Farmgate Milk Price, given the volatility experienced throughout the season to date, he said.

"...However, shareholders had an expectation that their co-operative would have delivered a higher dividend.

“Shareholders rightfully want to see the strategy provide a return on their investment  especially given the low Milk Price environment Farmers are currently experiencing.

“A sound strategy is key to adding value long term and it is important that Shareholders understand the factors that influence this.

“Farmers should take the time to ask questions of their Board and Management at the upcoming Farmer meetings.

“In the interim I continue to encourage Farmers to be prudent in their financial planning and to ensure they place their businesses in the best possible shape for next season.”

Fonterra said that half-year net profit after tax in the six months to January 31 was down 16% to $183 million, while "normalised" operating earnings (EBIT) were down 7% to $376 million, compared with the same period last year.

Chairman John Wilson said that given the results achieved in the first half of the year and the continued volatility in international prices, the group was maintaining its milk price forecast, but the forecast dividend "has been lowered to 20c to 30c per share, resulting in a forecast cash payout of $4.90 - $5.00".

The previous forecast was for a range of 25c-35c.

The Board has declared a 10 cent interim dividend.

"These half-year results are below our farmers’ expectations, in a period when the Farmgate Milk Price is low - and we are reducing the forecast dividend range".

“Our half-year results are a snapshot of tough conditions in dairy with variable production, demand and pricing. There was also the challenge of generating profit from inventory made in the previous financial year when the cost of milk was higher, but sold in the first quarter of the financial year when global dairy prices were falling."

ANZ rural economist Con Williams predicted in a "New Zealand Dairy Update" that after finance costs, the return for farmers this year "will be below break-even for many, especially those worst affected by the dry conditions".

Fonterra's Wilson said that in New Zealand, milk production got off to an excellent start in the current season. But a very dry summer in most regions curtailed production in the last three weeks of January, with the co-operative reducing its milk volume forecast to slightly below last season’s production.

“Oversupply from dairy producing regions around the world in the early months of the financial year saw the trade-weighted GlobalDairyTrade price index hit a five-year low in December. Supply outweighed demand and buyers undervalued milk, which was reflected in prices that declined to unsustainable levels. Lower commodity prices placed downward pressure on our Farmgate Milk Price in the first half. This was partially offset by currency, with a benefit of approximately 30c per kgMS to the forecast Farmgate Milk Price, as at January 31.

“Volatility continues to influence international dairy commodity prices and given this, we recommend caution with regards to on-farm budgets,” Wilson said. 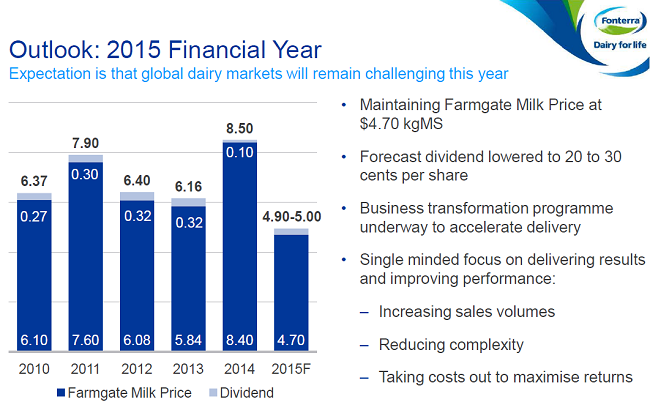 Chief executive Theo Spierings said Fonterra was strongly committed to its "V3 Strategy" (volume, value and velocity) formulated three years ago, which had been a "huge change" for the co-op.

"The strategy is creating sustainable returns through the integration of our ingredients multi-hubs and targeted consumer and foodservice positions in our key markets. We remain uniquely placed in the world with our global reach, asset footprint, and integrated grass-to-glass supply chain.

“But the change so far has not been easy. Capital structure change was a necessity. However, the precautionary recall last year, and recent contamination threat have been unwelcome distractions. These events remind us that the world is constantly changing and we have to be agile and responsive so we can remain ahead. We have the building blocks in place to deliver on our vision and strategy for the long term.

“We have a single-minded focus on delivering results: increasing sales volumes, reducing complexity, and taking costs out to maximise returns. To accelerate delivery on strategy, my team and I are leading a comprehensive business transformation programme. It will firmly embed the best features of entrepreneurial thinking, such as effectiveness, efficiency and agility.

“This will require some tough decisions. We are committed to improving performance. We have made good progress so far but we need to increase the pace of change,” Spierings said.

"There is a clear strategy in place, but the execution and change to culture/business practices appears challenging for the co-operative," Williams said.

"This, overlaid with a challenging operating environment, and many things that are outside Fonterra’s sphere of influence, appear to be a drag on earnings at present. How quickly the execution side of the strategy can be addressed through the “business transformation programme” will be key for earnings potential in 2015/16 and getting farmers back on-board for the ride."

Williams said the dairy sector could manage one tough year, "but two in a row would be a real test".

"Tighter cash-flow will necessitate cuts in not just capital and discretionary expenditure, but core operating expenditure to avoid a debt blowout. This will create some gestation issues across the economy."

Fonterra said that the record date for the interim dividend will be April 10, and the payment date April 20.

The dividend reinvestment plan (DRP), under which eligible shareholders and unit holders can elect to reinvest all or part of their cash dividends in additional shares or units, will be made available in respect of the 2015 interim dividend. The board has determined that shares and units will be issued at a 2.5% discount on the average closing price for the period April 8-14, 2015.

meanwhile in the EU

European Milk Board president, Romuald Schaber, said it was likely farmers would boost production in many member states following the abolition: "The most likely scenario is that dairy farmers will boost their production in many EU countries, regardless of the situation in the milk market. Another drastic price collapse seems inevitable, along with the next market crisis."

The upswing of the dairy market created by the entrance of China in 2008 has finally calm down after 8 years of adjustment.

Just as well Dairy Farmers are 'killing it' with capital gains.  It's worth pointing out the $5.75 forecast for next season is still well below the average breakeven of $6.50.  Watch this space, I guess.

"Chief executive Theo Spierings said Fonterra was strongly committed to its "V3 Strategy" (volume, value and velocity) formulated three years ago, which had been a "huge change" for the co-op."
I don't understand all this talk of change and the need for it. I thought Fonterra was already the best, I thought Ferrier had done a magnificent job, certainly paid magnificently.
Certainly a 20-30c dividend at a time of very low cost raw product prices would point to a need for a bloody big earth shattering sort of change.
Fonterra doesn't look very good does it.

Andrew Ferrier was a very clever chap with contacts in many industries.

When he went, and the government objective of TAFT had been reached that was it.

They were doomed as soon as they were trying to put "corporate Fonterra" price-setter behaviours on to a commodity business.

You are right; if you have a winning formula you work it; you don't throw it out for some pipe dream.   Sadly Fonterra was believing too many of it's own propoganda notices.

We have _excellent_ milk.  But what Fonterra, and worse NZ, _doesn't_ have is high farm gate returns.... returns that we have been underselling on for many decades.  We used to get to laugh at all the silly regulations that made foreign production incredibly expensive - things that we just didn't require in NZ.  We didn't have to get milk instantly cold, nor vets to routinely check animals because we didn't have them on feed pads, farmer groups could be relied on to have active farmers rather than just be staging platforms for non-farmers to sell things and ideas to farmers. We could send non-productive animals to the works...without the stupidity of being told the farm CEO should be personally checking off every shipment....

They thought they knew all the answers and it was silly farmers complaining.  So now the chickens are coming home why should anyone be surprised.   Now the best of NZ genetics and techniques have been shipped to China, just what does the NZ government and population think it's going to stand on.

I'm thinking Fonterra will go the way of Glaxo-Klein just to preserve the value of those management share packages...

so are banks funding "the business" or the land that they occupy?

"below farmer expectations" - and the those of the silly townies (now being milked along with the cows) who bought the listed "shares". Anyone who wants to make a fortune out of fontera should sell their "shares" (or farms for that matter) and get a job at fontera. It's a typical bloated monopolistic bureaucracy. They were warned, expect more tribulations as cheap corn becomes milk in the USA.
EP

Now the "white gold" is turning into "fools gold"...they're cutting the projected dividend?

Just brings to mind what a Massey Dairying Professor was saying about he couldn't understand why more dairy farmers don't spend up large on Technology.....  But don't worry the new regulations on extra plant required for cooling, extra legislation on staff, and tougher ACC regulations will come to the rescue of all those rich farmers.....