Unpruned logs increased $6-10/JAS m3 and pruned was unchanged at some ports and up $1-3/JAS m3 at others.

Export pruned logs avoided most of the big price drop in May, so had less room to move.

Log stocks in China continued to fall steadily through May, reducing by nearly 200,000 m3 to 3.87 million m3 over the 25 sea-ports monitored. Since the peak of 4.27 million m3 at the start of April, log stocks have reduced by 400,000 m3, or by just over 6,500 m3 per day. However, market observers comment that stocks need to get under 3.0 million m3 to bring confidence back into the market.

Additional initiatives by the Chinese government to assist home buyers has boosted the housing market. All first-tier and some second-tier cities are posting higher sales volumes and month-on-month price increases.

This is confirmation that the market downturn which commenced last year has turned into a strong upward trend in first-tier cities, and an improving trend in second-tier cities.

Despite this improvement in the housing market, some large Chinese log receivers are still struggling to access sufficient trade credit, suggesting that the large unsold housing inventory in second and third-tier cities, and perhaps other government policies, are still constraining cash flow in the supply chain. This is subduing the recovery in log prices.

Most at-wharf-gate NZ$ June pricing appears to be based on A-grade at around US$100, up from a low of US$95 in May. A slight reduction in the NZ$:US$ cross rate was favourable for NZ$ June pricing, partially offset by a slight increase in ocean freight rates.

In May PF Olsen was able to negotiate fixed export prices with two major exporters for a specified volume. This prevented some forest owners being exposed to the very low May prices and allowed smaller harvesting crews to continue work. Whilst this is risky for the exporter, it reflects a commitment to try take some of the very damaging volatility out of the market. 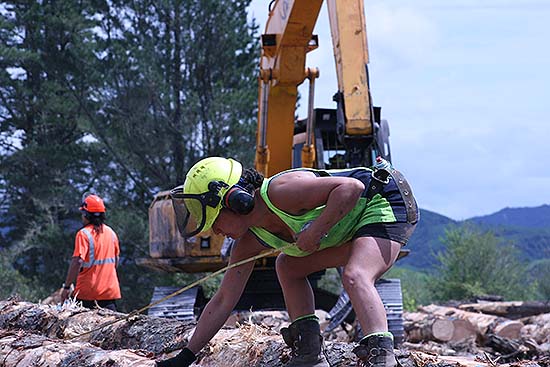 Fixing export log prices for a specified volume prevented some forest owners from being exposed to the very low May prices and allowed smaller harvesting crews to continue work.

The chart below shows the dramatic decrease in log volume exported from the Pacific Northwest (Canada and the USA) in the first quarter of this year compared to the same quarter last year (down 44%). There is also an overall 15% decrease in China log imports for the same comparative period. Part of this is due to the downturn in the housing market, but there has also been an increase in lumber imports, especially from Russia. In April, the import volume of softwood lumber by China reached its second highest level on record. Importation during the first four months this year was 2.1 percent higher than in the same period last year, with Russian sawmills increasing their shipments by over 13 percent. 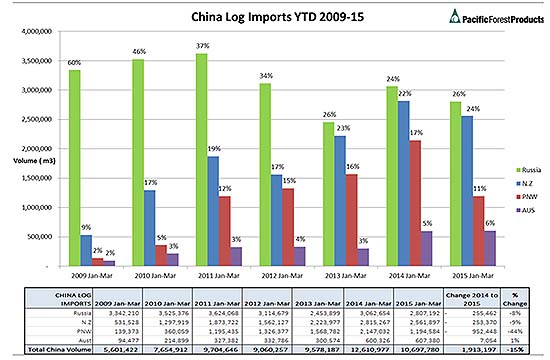 The outlook for export logs is still positive, but many market commentators are cautious based on concerns about the Chinese economy in general, and its housing market in particular. At-wharf-gate prices are expected to rise in July, and possibly significantly if the NZ$ stays below US$0.70. Further out is less clear. Many are saying log stocks in China need to decline to at least 3 million m3 prior to Chinese New Year early next year. In the meantime, China is entering its hot season and crop harvest time, when construction activity and wood demand typically declines. How this affects log stocks will be carefully watched to provide insights into the direction of the export log market for the rest of the year.

Domestic pruned logs continue to be well sought after with shortages in several regions. Prices are stable after the May rise. Unpruned log demand is strong especially for logs meeting the structural log specification which is usually >3,000m per second sonic velocity (sonic velocity is used as a proxy for density and wood strength). Domestic pulp log demand and prices were steady.

Few expect the new rules recently announced by the government to quell housing speculation and foreign ownership (minimum two year holding period and domestic bank accounts) to have much of an impact on the Auckland market. It may, however, provide some useful information on the demographics of purchasers. Maybe one reason the government is modest in its responses to an over-heated Auckland property market is that there are too many people benefiting, and when the government is measured on GDP growth in the short-term, there is a clear incentive not to pour too much cold water on widespread and significant wealth “creation” for the lucky Auckland house owner. Consumer spending patterns in Auckland are driven more by house price increases than salary and wages. Many young first home buyers, however, don’t get a look in. And the majority of people will enjoy the party until, inevitably (as it has been with all housing bubbles in the past), there is a major and painful downward correction.

The Australian housing market is similarly buoyant. Overall house prices increased 9% in the year to April, led by Sydney, up 15%. UBS is forecasting a moderation to 6% by the end of this year and slowing to 3% in 2016 – still well ahead of inflation.

The USA’s weaker-than-expected first quarter economic statistics are now considered an aberration to an otherwise solid economic recovery. Business confidence, new jobs and housing starts are posting strong figures. This will have various positive impacts on the New Zealand forestry and wood products sector. Firstly, stronger demand and prices for New Zealand wood products such as clear Radiata pine boards and mouldings. Secondly reduced North American exports of logs and lumber to China (which compete with New Zealand logs and wood products exported to China), as the USA consumes more wood internally. An additional benefit will be increased demand by the USA for Chinese made finished wood products such as furniture. This is already partly the reason that  NZ export pruned log prices are holding up so well – massive Chinese investment in pruned log processing to make products such as edge-glued clear wood panels and linear mouldings, much of which finds its way to USA and South Korean consumers.

The PF Olsen log price index rose four points from $95 last month to $99 this month. It is now $14 higher than its cyclical low of $85 in November 2011 and $7 below the two-year average and $2 below the five-year average.

As mentioned last month in this report, due to the high pruned log prices (both domestic and export), the log price index is faring better relative to export log prices. With the index close to its five-year average, most forest owners with longer term harvesting projects are  buttoning back production while the market is soft, but not suspending operations. This is a sensible response, especially in light of maintaining stability and skills in the harvesting sector. Export prices are expected to rise further in July.