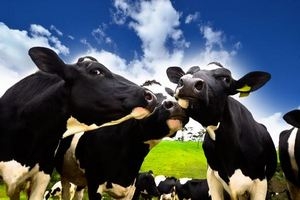 About 80% of dairy farmers are likely to have negative cash flow in their 2015-16 dairy season, but the vast majority of dairy farms should remain viable, according to an article published by the Reserve Bank.

A Reserve Bank Bulletin article entitled; An updated assessment of dairy sector vulnerabilities, estimates 49% of the sector had negative cash flow in the 2014-15 season. Cash flow pressures are expected to increase, with about 80% percent of farmers, representing nearly 90% of sectoral debt, expected to have negative cash flow in the 2015-16 season. This, the article says, is despite allowing for some reduction in farm working expenses, drawings, and interest rates.

Dairy debt stood at $37.9 billion at June this year, representing about 10% of total bank lending. The Reserve Bank estimates debt levels are at more than 300% of trend milk income.

The article applies a stress-testing model to assess the potential rise in dairy sector non-performing loans (NPLs), based on the Reserve Bank's understanding of actual bank behaviour. The assumption is made that banks continue lending to farmers in negative cash flow unless their loan to value ratio (LVR) is above 90% and future periods of positive cash flow appear unlikely.

"The vast majority of dairy farms remain viable under the base stress scenario, with NPLs rising to 7.8% of original exposures by 2018-19. The worst case scenario features a slow recovery in the payout and a sharp decline in land values, resulting in NPLs increasing to around 44%. While this scenario presents a highly challenging environment for the dairy sector, our results suggest that losses for the banking system as a whole would be manageable," the article suggests.

The Bulletin article comes after the Reserve Bank said in its Financial Stability Report last month that it had asked the five biggest dairy lenders (ANZ, ASB, BNZ, Westpac and Rabobank) to undertake stress tests of their dairy portfolios. The prudential regulator said it expected the results by year's end and said they would be reported on at a later date. Although non-performing dairy loans were still low at 1%, up from 0.6% a year earlier, the Reserve Bank said "watchlist loans," that provide a leading indicator of non-performing loans, had increased over the last year and were now running at 5.8%.

The Reserve Bank Bulletin article comes out the same day as new Statistics NZ figures showing the number of dairy cattle in New Zealand has fallen for the first time in a decade. Statistics NZ says there were a total of 6.4 million dairy cattle at the end of June this year, down 300,000 year-on-year against a backdrop of falling international prices and lower milk solid payouts. Fonterra last week reiterated its $4.60 per kgMS milk price forecast for the current dairy season, although economists note global dairy prices need to improve for this price to be achieved.

The Financial Stability Report also included modeling of what might happen to bad loans to dairy farmers if land prices fell as much as 40% and the payout rose only to $5/kg by 2018/19. It estimated its worst case scenario could see 44% of loans becoming non-performing, with those loans held by 25% of farmers. Eventual loss rates under the scenarios ranged from 2% to 14%, which amounted to losses of around 2% to 18% of bank before-tax profits. The Reserve Bank says it's in discussions with banks to ensure they are setting aside realistic provisions to reflect the expected rise in problem dairy loans.

The Bulletin article notes that between February 2014 and August 2015, global dairy prices fell by more than 65% in US dollar terms due to increased global supply, sanctions on Russian imports, and reduced Chinese demand following a build-up of inventories during the 2013-14 season. Over this period, the NZ dollar depreciated, dampening the fall in NZ dollar terms.

"Dairy prices have since increased from August lows, but recent outturns have not been favourable and prices remain well below their long-term average. As a result of sustained lower milk prices, dairy farmers are currently facing significant cash flow pressures. Following a record 2013-14 season, Fonterra’s payout fell considerably, and farmers are now expected to face consecutive sub-$5 payouts (per kgMS). The impact of the low payouts is amplified by an increase in average break-even payouts since the 2006-07 season, reflecting increases in debt levels and a shift to more cost-intensive operating structures," the article says.

"The worst cash flow pressures are expected to emerge in the current season (2015-16), compounded by low retrospective payments from the 2014-15 season. The cash flow shortfall for the average dairy farmer is estimated to be more than $1 per kgMS, based on DairyNZ forecasts of $4.15 for effective milk revenue, taking into account the latest Fonterra forecast for the headline payout," the article says.

However, it says dairy farm land values have been supported by low interest rates and a largely positive long-term outlook for the payout with the Real Estate Institute of New Zealand dairy price index growing at about 10% per annum through the 2014-15 summer.

"However, land values have recently shown signs of weakening, on limited sales volumes. There is a risk that land values could fall if cash flow pressures persist, especially if confidence in the longer-term milk price outlook deteriorates. Downward price movements could be amplified by reduced liquidity in the farm market, if demand to purchase farms falls alongside the increased risk of rising stressed sales. The extent of financial system losses in this scenario hinges critically on how debt is distributed within the dairy sector," the article says.

"With a large portion of the sector making cash losses in the 2014-15 and 2015-16 seasons, demand for working capital has increased markedly. Banks have supported the sector by expanding lending by more than 10% over the past year, on the basis that most farms are expected to be profitable over the medium-term. However, there is an increased risk of a rise in non-performing loans in the dairy sector. Highly indebted farms are particularly vulnerable, as they tend to have less equity and lower profitability. For example, the 20% of debt with the highest debt per kgMS has an average LVR of around 68% and an estimated break-even payout of $5.80 in 2015-16," the article says.

The Bulletin article was authored by Ashley Dunstan, Hayden Skilling, Matthew Newman and Zach Mounsey and is described as being the joint work of the Reserve Bank and DairyNZ. Newman and Mounsey work for DairyNZ. 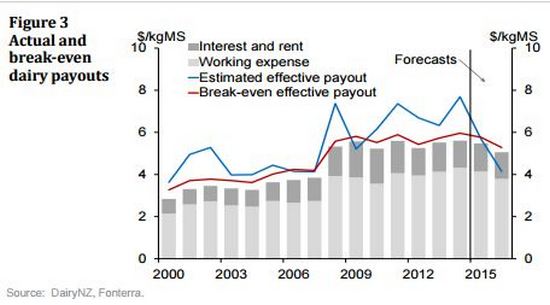 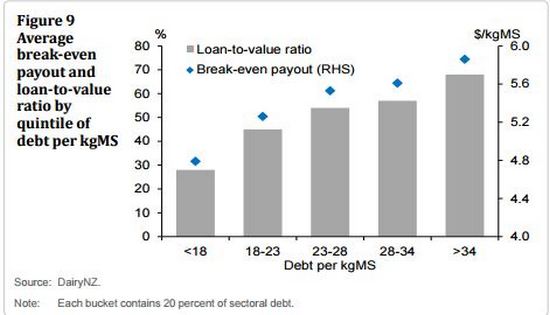 ''A Reserve Bank Bulletin article entitled; An updated assessment of dairy sector vulnerabilities, estimates 49% of the sector had negative cash flow in the 2014-15 season. Cash flow pressures are expected to increase, with about 80% percent of farmers, representing nearly 90% of sectoral debt, expected to have negative cash flow in the 2015-16 season.''

So that means presumably that 49% of farms will have negative cash flow over a period of at least 24 months. Hmmmm, there aren't too many businesses I know that can keep going under those conditions, the Bank seems remarkably sanguine.

I daresay everything that lives and breathes in our rivers and lakes will be raising a silent cheer at the removal of 300,000 cows from the environment.....

The rivers and lakes would raise a far greater cheer at the removal of 300,000 people from the environment. The pollution around towns and cities is far worse than that in rural areas.

And our current Government imports more of them every year.

I especially like the financial wizards idea - they are totally full of it ;)

Surely we need some sort of countercyclical measures to take the heat out of these sorts of booms. They are inevitably followed by a bust, but before that happens there is a frenzy in the sector, asset prices go through the roof, the gullible jump on the band wagon and borrow unrealistically. Then there is a lot of pain and damage to the economy. How many times have we seen it?

I bet you any money, I can borrow faster than any one here.

In fact I can build faster, bigger and with no regard for taste, on the smallest plots, but make the most returns than the entire world put together.

In truth, if I may be so bold, I cannot lose, as I am an aspirational Farmer, through and through.

And if I should ever falter, please forgive me. I may pay you back one day, with interest, off some poor saver, thereby saving us all, so do not be negative and lend me heaps.

Wow, 6.4 million cows in poor old NZ, the USA only has 9.2 million cows. I think we overshot a bit

A white gold black comedy about to turn red.

Perhaps one good thing is that at least urban NZ will begin to appreciate that the fortunes (or not) of the primary sector affect us all.

the white Gold comedy turns into a tragedy.

Too simplistic as are the comments.

There are at least five interlocking determinants of 'viability':

Add to all this, location, soil types, opportunity for diversification (easy if there are 'spare' farms in a big corporate) and so on.

The world of dairy is much more Interesting and complex than is generally realised.

All of which makes the statistic of 49% having a negative cashflow that much worse.

Crikey Andrew that was the find of the month...year even. Well done. Should be compulsory viewing for all farmers. No wonder the cash rate was dropped again. There will be a world of pain out there shortly. As the flush drops off and those payments dwindle...for the second year....and looking like this will continue for year 3 at the very least.