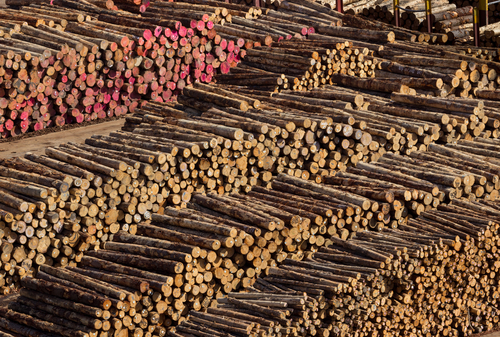 Be careful what you wish for.

I have heard this sage advice on several occasions throughout my career, and each time, on reflection, it takes on more richness and meaning.

It comes to mind when observing the rapid export log price rises in the past three months. While on face-value a boon to forest owners [the “wish”], the down-side is the increased volatility it portends and the damage it causes many participants in the sector – especially those that gear up for a market upturn [the “be careful”].

While price movements in the past have been more commonly “up the stairs and down the elevator”, it now looks more like elevator all the way.

December saw export log prices rise $8-$15 from November (November prices were up by about the same amount on October prices). Domestic prices were also pulled up but by a smaller amount. However, there are expectations of much larger rises in the first quarter of 2016 (most domestic log prices are negotiated quarterly) – see Market Round-up below.

Log inventory levels are static to down in all markets and log demand is steady. Log supply is increasing now but on an international scale is still well balanced with demand.

China log inventory is steady at 2.69 mill m3 and has been around this level for the last couple of months. Daily offtake over the past month has been around 45,000 m3/day – which is less than the year-to-date average of 51,000 m3/day but there has been some extreme winter weather in the north with 50-year record snow falls causing lower offtake.

Having said that, price resistance is being faced by NZ log exporters. Customers are wary about the recent price increase and with winter hitting hard in the northern regions positive sentiment is a little difficult to find. Credit has been tightened for some customers and there has been confirmation of some exporters fixing lower prices in December.

Exporters are biasing customers with their own processing capacity as their demand tends to be more reliable and they generally have good access to trade credit.

The Indian market is showing solid demand with favourable prices even after the ramp up in prices in China. This market should provide some relief to lower Chinese demand which inevitably shows up around Lunar New Year (early February next year).

With A-grade priced at around US$120/JAS m3 in China there is some incentive for other supply regions such as the Pacific North West to increase log export volumes. They usually receive a US$10-15/m3 price premium over Radiata pine due to the inherent higher log qualities of Douglas fir and Hemlock. However, the northern winter will limit any increase in supply and we do not expect to see any significant increase in supply from either Russia or the Pacific North West until March/April of next year.

Ocean freight continues to track historically very low rates, based on over-supply in the Handy-size vessel sector and very low bunker (ship fuel oil) prices. Neither of these are expected to increase significantly within the next year.

In terms of outlook, other than some weak NZ exporters taking unnecessary price reductions, the export log market looks reasonably sound. There is a risk that January prices fall, based on a CFR price drop. The rest will depend mainly on movement in the NZ$:US$ cross rate. If we get some welcome price stability, it will help the market consolidate and hopefully start operating on a less speculative basis. 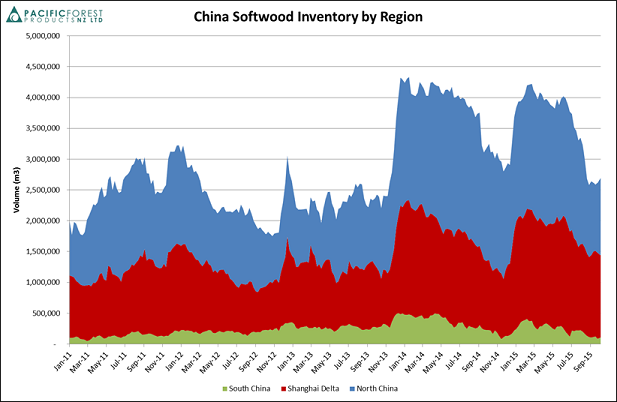 For the medium term, China will continue to strongly influence the New Zealand log market. This year, China imported more than 10% of the world’s wood products (logs, lumber, pulp etc). The new Five Year Plan commences next year and has an objective of doubling 2010 GDP by 2020 (implying an annual growth rate of 6.5%). And this growth requires a massive shift from economic activity dominated by capital investment to activity dominated by services and the consumption. As we see the Plan unfold, we will be watching closely for indicators of how it might impact on our log market in the near and medium term.

The theme of relative buoyancy in key wood products markets continued – domestic, Australia, USA, Asian and Europe. Although off its year low of 0.63 (NZ$:US$), the kiwi at around 0.67 is still well off this year’s starting position of 0.78 and is favourable for wood products exporters. Most commentators are calling for further kiwi downside which will further support wood products exporters. This may well be needed as 2016 is shaping up for a scramble for log supply as domestic purchasers face strong competition from export markets for some key grades.

The latest BNZ confidence survey produced strong positive sentiment in construction, property development and the housing market (particularly provincial markets). Staff shortages and cost escalation is also being reported in these sectors. This is supportive of demand for wood products. Interestingly, the Auckland housing market is flattening off with speculation that this could be due to the recent new government restrictions on foreign purchasers.

The USA is finally posting consistently favourable economic data, especially better employment figures and has now signalled the end of quantitative easing and the start of interest rate hikes. So long as this doesn’t overly suppress economic growth, this should augur well for NZ exporters of wood products to this market.

Although the Australian housing market is starting to falter, demand for NZ wood products is expected to remain steady. A cooling in the hot Melbourne and Sydney housing markets is beneficial to avoid a potentially much larger fall should the market be pushed to greater heights.

Here are some comments gleaned from market participants this month –

“Significant upwards pressure on domestic structural and domestic pruned to compete with recent export pricing. Just commencing Q1 2016 pricing negotiations with some mills stating if we have to pay export equivalent to get marginal supply we will to keep the mills running."

“Pruned market is dead for some domestic purchasers – some started to take P30s as P40’s getting too expensive 2-3 months ago. Due to price the P30 may be out of reach as well.”

“Pruned demand is running hot around Gisborne and Hawkes Bay."

“Large domestic purchaser is paying the same price as export. They will buy some after Christmas. Another large purchaser wants as much as possible but is paying November prices as they can’t match export parity for December."

“Out of district pruned log purchaser is wanting to source pruned early in the New Year from Gisborne side. They will have to pay about $255/tonne to make it worth the extra trucking cost."

“On the unpruned side of things – local purchaser wants S30 logs. Will pay about 127/tonne delivered. Close to export prices.”

“Sawmilling steady. An oversupply due to manufacturing capacity increase is coming.”