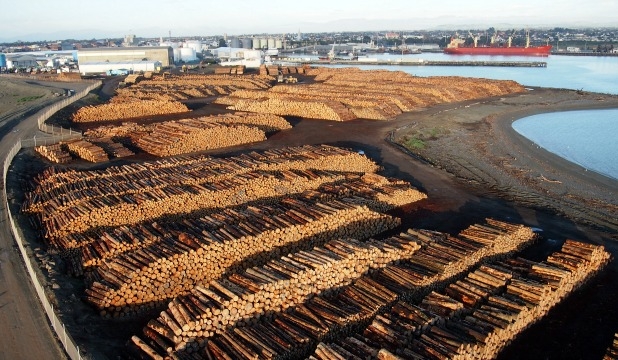 During those two months, export log prices fell in January and rallied again in February to end up pretty much at December levels again.

Domestic log prices have continued to strengthen on the back of solid demand, especially for pruned logs.

Pruned log prices in excess of $200/JAS m3 or tonne are now reasonably common-place, at least in the Central North Island and Northland for both export and domestic supply.

As speculated in our December report, January prices fell based on a CFR price drop [CFR is the price logs sell for in US$ at the destination port]. This was partly offset by favourable movements in the NZ$: US$ cross rate and, believe it or not, further reductions in [already very low] ocean freight costs (mainly lower bunkers – ship fuel oil). Modest firming of CFR price and a continued favourable NZ$:US$ cross rate and ocean freight rates saw the export log price rally again in February to recover almost all of January’s reduction.

With the A-grade CFR in China at around the [relatively low] price of US$116/JAS m3, it is not stimulatory for North American log supply. The strengthening trend of the US$ adds to the decreasing competitiveness of log exports from the USA. This will help keep a lid on excessive inventory build beyond the expected increase through Chinese New Year. 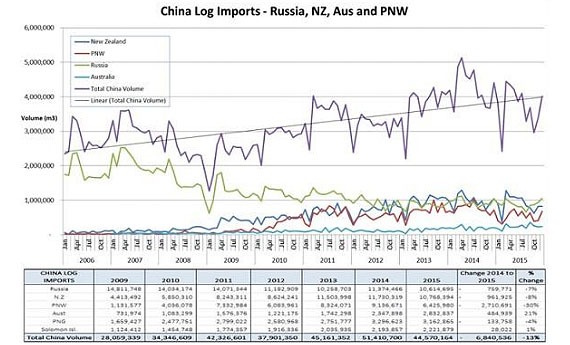 The chart above shows 13% lower log exports to China from the main supply countries in 2015 compared to 2014. Notably, 3 of the top 5 supplying countries volume is down by single digit percentage reductions (NZ, Russia and PNG) but PNW (the Pacific North West) is down 30%. Australian supply is against the trend, up 20% at 2.8 million m3 in 2015.

The drop in log imports was partially offset by higher imports of lumber but overall imports of logs and lumber were down from 77 million m3 in 2014 to 71 million in 2015; a decrease of 6 million m3 or 7.7%. Since it is unlikely that Chinese domestic log harvest increased during this period [probably the opposite], this decrease is likely to represent lower overall consumption of wood products as housing starts languished and economic growth faltered.

China log inventory has fallen from 2.7 million m3 as we last reported in December to 2.4 million m3 just prior to the Chinese New Year holidays, but is expected to increase again to around 3.6 million m3 by the end of this month.

China’s economic prospects are being dogged by falling GDP growth. It has a weak (although improving) real-estate market, a large and inefficient state sector, a weak heavy industrial sector, high debt, and an opaque financial system. Growth in the domestic/consumer market and services is not yet sufficient to fully offset these economic weaknesses. However, we must remember that even though China’s 2015 GDP growth came in at 6.9%, it’s off a high base being the world’s second largest economy. Even growth rates of 6-7% will create significant increases in demand for goods and services, including wood products. China is also well-positioned to benefit from the improving South Korean and USA housing markets and is investing heavily in export-oriented wood processing such as lineal mouldings, doors and edge-glued panels. 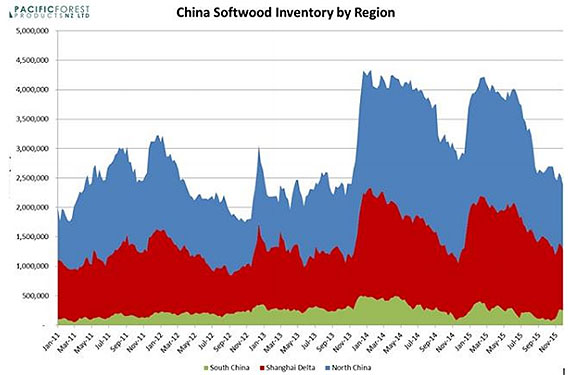 India is a bright spot, with a high GDP growth combined with an increasing appetite for softwood logs and lumber based on dwindling supplies of domestic and South Seas hardwoods (e.g. Teak from Myanmar). Annual wood consumption growth in India is reported at a healthy 20%! The IMF forecasts India’s GDP growth rate at 7.5% for 2016 and 2017. However, exporters are currently taking a cautious approach as India is starting to show signs of over-supply, despite good medium/long term potential.

Japanese and Korean demand and price for logs is steady and a useful alternative to the otherwise China-centric market orientation. Korea continues to slowly reduce in importance, however, as demand moves from logs to more lumber and processed wood products. Despite this, Korea is still our second largest market with 2.2 million m3 of logs exported from New Zealand to Korea in 2015.

Ocean freight continues to track historically at very low rates, based on freight capacity oversupply and very low bunker (ship fuel oil) prices. Neither of these drivers are expected to change significantly this year. We hear reports of ocean freight rates routinely in the mid-high teens (US$/JAS m3). This will cause some serious financial stress to leveraged ship owners.

Domestic log demand and price continues to be strong. Pruned and unpruned structural logs are particularly sought after. Some log processors are desperate for logs and prepared to pay top dollar to attract reliable, quality supply. The pruned log market is supported by the depreciating NZ dollar boosting returns for high-value products such as clear boards sold into the USA and Europe. Structural logs are benefiting from strong local construction demand and steady demand from Australia.

Whilst New Zealand GDP growth will weaken with the lower dairy pay-outs, tourism and the construction sector are booming. And whilst the house price appreciation in Auckland has unfavourable socio-economic implications, it is unlikely to pose a substantial threat to the economy, at least at the moment. Demographics will continue to support a strong housing market for the foreseeable future. In any case, recent figures show that the Auckland market may have cooled for the time being, perhaps due to the new rules imposed by the government last year.

A firmer housing market is also spreading around most provincial regions since the last quarter of last year. Turnover is up significantly, with prices following. This will be supportive of domestic demand for wood products.

Australia is experiencing a surge in approvals for 4 storey+ residential dwellings, up 24,436 units year-on-year (ending Nov 2015), a 50% increase! However month on month approvals were down 2.7% suggesting the peak may have been reached. In addition, approvals for free-standing houses is falling. Overall the data indicates that the longest new dwelling boom in history has ended. This will put pressure on an economy that is well into a significant decline in investment in the resources sector due to soft metal and mineral prices.

Australian lumber imports in the last year have continued to increase from Europe and decrease from the USA, driven largely by a much lower depreciation of Australian dollar against the Euro than the US$. 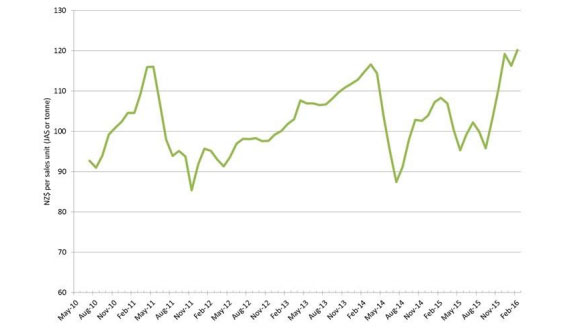