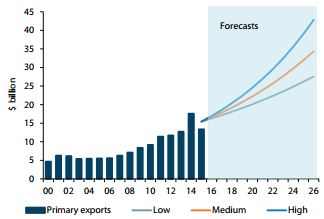 While sheep and beef farmers are questioning whether they will ever receive the returns they need, there is potentially considerable hope for the future.

The changing demographics and spheres of global influence indicate a substantial change in the relative economic power of the markets with which we trade.

The ANZ Bank’s June report focuses on new horizons in Asia, highlighting the top six countries we already trade with, representing 80% of New Zealand’s bilateral trade with Asia, and a second division of up and coming prospects. The report’s focus on Asia means our trade with the rest of the world is excluded from the analysis, but it provides a timely reminder of the opportunities available in markets not previously seen as easy or possible to develop.

These opportunities are further underlined by the Regional Comprehensive Economic Partnership negotiations held recently in Auckland involving 16 Asian countries which importantly include India. This group of countries includes China and otherwise largely mimics the signatories to the TPP with the important exception of the USA, but it is intended there won’t be the same level of secrecy with RCEP, nor will it have to run the gauntlet of the American House of Representatives.

RCEP also complements New Zealand’s existing FTAs in Asia, as it embraces ASEAN and the six countries with which ASEAN has negotiated FTAs. It currently comprises 45% of the world’s population and 40% of world trade, although both these figures will inevitably increase in the future.

ANZ’s report rates the top six markets on several dimensions – Singapore, Hong Kong, Japan, South Korea, Taiwan, Malaysia and China – and New Zealand exporters have targeted them very well. However the report lists another nine countries in particular that meet the requirements for future assessment and development - Thailand, Indonesia, Mongolia, Philippines, Vietnam, Brunei Darussalam, Armenia, Azerbaijan, and Kazakhstan. Some of these, notably the first five, are already being developed.

Each market has its pros and cons with some being fast-growing on a number of fronts, highlighting rapid growth of new opportunities, while others are more mature, but offer growth opportunities if market penetration and share can be increased. Others represent large opportunities, but have a number of barriers that would need navigating. Indonesia is one such market with its inconsistent approach to self-sufficiency.

In his introduction ANZ Chief Economist Cameron Bagrie lists a number of factors to be considered by any company wishing to develop new markets in Asia, although these hold equally true for other parts of the world. His key points are strong business relationships built up over time and based on mutual trust; intimate knowledge of a targeted market segment; cultural understanding of tastes and business practices, local staff or collaborators, recognition of market size, and above all patience and a long-term view of the time, cost and effort required to become truly established.

If current trends are a true indication of performance, New Zealand exporters are already moving at an appropriate pace to develop business in the best markets and will continue to invest in new market development. The big questions are how and whether this can be done better or faster.

The red meat industry is particularly sensitive to a range of factors, such as market access, seasonality, exchange rates and the robustness of the cool chain. Beside these sits demand which fluctuates according to the economic conditions in each market. There is a limit to what New Zealand, as the exporting country, can do about any of these, especially in isolation.

However what we must do is to ensure our product hits four Ps (and one D) absolutely spot on: it must be produced, processed, packaged, promoted and distributed to the best standards of quality and efficiency for each selected market destination and end use, whether for retail, food service or manufacturing use.

Agricultural envoy Mike Petersen has been pushing or in his own words ‘banging on about’ the need for a coherent global story to take to the world, but makes the frustrated point we are lagging behind many other countries. He cites Ireland’s Origin Green campaign as the most impressive example of such a story. Scotland the Brand is another campaign which was launched in the 1990s because of frustration at mediocre export growth and the lack of high value inward investment.

Scottish industry leaders formed an advisory board to obtain joint venture funding from the government to form a specialist marketing unit to attract support for an integrated marketing campaign across industries. This is now a limited liability company funded increasingly by industry with the government’s contribution reducing over time.

In stark contrast to this common sense approach, New Zealand has failed to make the most out of its natural advantages with each sector still trying to do its own thing while riding on the coat tails of the tourism sector’s 100% Pure branding. B+LNZ is in the process of trying to work out whether it has a role in market development, but it only plans to spend $5 million per annum on promoting a $9 billion industry. This is really not enough, although it is additional to what the meat exporters spend either on their own branding or on joint promotion with B+LNZ.

You have to ask how much further this would go if New Zealand as a whole picked up on Mike Petersen’s concept of a coherent brand in support of which each industry sector and company could run its own promotional activity.

All this makes the debate about farmer ownership of the meat industry look irrelevant; it’s more about how to use capital most effectively to participate in the value chain.

It looks as if our red meat sector will enjoy increasingly strong demand from countries with serious growth potential which must inevitably push the value of our meat exports higher, as more markets compete for them. We may not have large amounts of capital to invest in each overseas market, but if we promote our product benefits coherently and intelligently without trying to cut our competitors’ throats, the future looks very promising.

"There is going to be more beef and the consumer demand isn't there, the exports aren't' there," agreed Mr Wagner.

Alan, how can you take meat marketing seriously when you have farmers like me selling milk lambs to the UK christmas market at 4 months of age,at the same time as large trading operations like Brownriggs are selling hundreds of thousands of last seasons ram lambs in October to the same market? They must taste awful and I know of no farmers who eat them themselves
We now have several farmers who solely trade lambs in our area, buying ram lambs off the coast, keeping them till the end of October and one in particular I know, selling to Affco christmas lambs contract. That is a working ram lamb, it makes absolute non sense of Mr Petersens banging on and exposes him as an industry shrill with little understanding of how business really works.
If you really want to get serious then we need some law changes. Every large company today started in someones back shed, we need legislative change so dairy farmers can sell raw milk make their own cheeses/yoghurts and sell them without any government intervention locally. The wine industry would be revitalised if growers could start making small volumes of wine for locals, with out the restrictions and taxes we have at present.
It is numerous small operations closely linked to consumers where we will find the innovation and skills required to succeed, some will go on to be the new Villa Maria and Affco's.
At present large corporations have the ear of government and actively campaign to protect their own interests, by encouraging legislation that makes it almost impossible for new small startups to succeed, using the logic that markets require it. Well why not break markets all the way down to individuals who are quite capable of making their own choices and get government the hell out of the way?

Welcome to the National party, farmers vote for us because your forefathers did and you don't want to let the side down right? in return we will tell you how bright the future is so you can sleep well at night

I totally agree with your point about last season's ram lambs being sold alongside your new season's lambs. I know it isn't always easy to meet shipping schedules for pre Christmas lamb contracts, but processors should apply some discipline and reject lambs outside a certain specification.

However your point about government getting out of monitoring doemstic production won't fly, because food hygiene laws will make it politically impossible to achieve. I'm afraid you want to push the proverbial uphill.