Both domestic and export log markets feature positive sentiment, although prices drifted in December. Fundamentals appear to be moving to favour suppliers again

Both domestic and export log markets feature positive sentiment, although prices drifted in December. Fundamentals appear to be moving to favour suppliers again 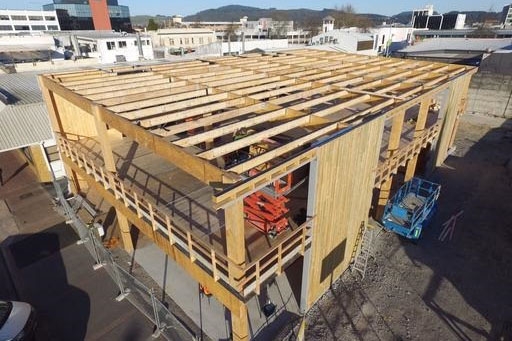 Both domestic and export log prices drifted in December with minor changes in some regions and to some customers, but little overall movement. Both markets continue with strong positive sentiment. The domestic market continues to be buoyed by a strong New Zealand property market and construction activity; the export market again is a strong-demand-from-China story.

This situation is expected to continue into the foreseeable future although further price increases, if any, are expected to be moderate over the next few months.

Most exporters reported modest gains in US$CFR pricing in November which supported NZ$ at-wharf-gate prices in December. Supply and demand are well-balanced in China and Korea at the moment while India is a little heavy on both inventory and supply. Also in India, the turmoil in the banking sector from cancelling two denominations of Indian bank notes constrained the ability of some log exporters to access trade finance – this situation is now understood to have been resolved.

Inventory in China is stable at 2.2 million m3 and daily offtake from the ports is around 60k m3/day. This gives under 40 days of stock which is considered well-balanced to slightly tight (see chart below). This bodes well as the Chinese Lunar New Year approaches, which, being 28 January 2017, is better timed to coincide with New Zealand’s Christmas shut down. This is because log production in the new year from New Zealand will start to arrive in China at about the time the Chinese Lunar New Year holidays are concluding, and demand ramps up again. 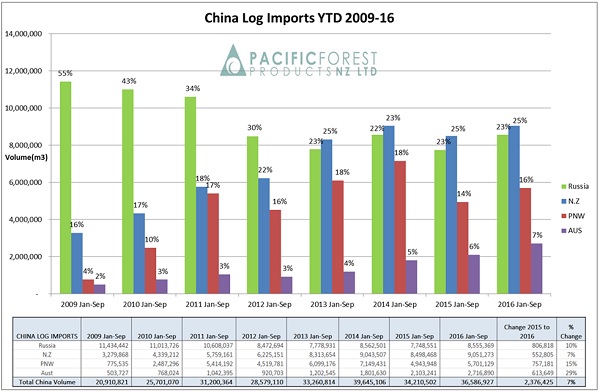 Favourable log prices and the increasing availability of maturing forests planted in the 1990s is resulting in increased sales volumes in all markets. New Zealand logs exported to China are over 500,000 m3 higher Jan-Sep 2016 than the same period in 2015 (up 7%). However, increases of 10%, 15% and 29% between the same periods for Russian, Pacific North West and Australian log supply, respectively, suggests that NZ Radiata pine has lost some market share to these competing sources of softwood logs. 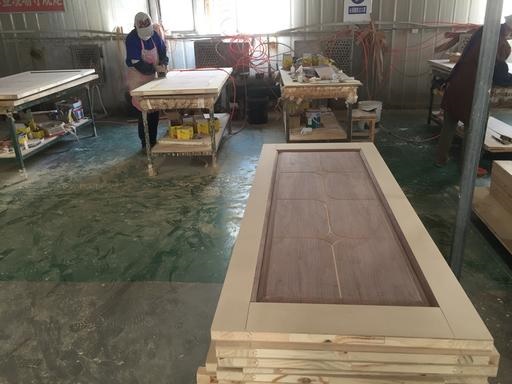 Clever use of solid wood (pine) finger-jointing/edge-gluing in conjunction with (pine) wood-fibre panels and decorative hardwood veneers result in attractive wooden products such as these doors being manufactured in a factory in Shandong, China.

The NZ$:US$ cross rate has been volatile but has spent most of the second half of this year trading between 0.70 to 0.73. The kiwi dollar dropped after the Trump election win (strong green-back from belief in Trump-inspired economic growth in the USA), only to rally (somewhat counter-intuitively) after the Reserve Bank of New Zealand (RBNZ) cut the OCR by 25 basis points to 1.75%. This is presumably based on confidence of continued strong New Zealand economic growth. With the RBNZ still saying the kiwi dollar is too high, and some banks picking a lower exchange rate, it is reasonable to expect modest upside in New Zealand at-wharf-gate log prices as a function of the exchange rate outlook. This, however, will be easily over-shadowed by changes in US$ CFR pricing.

Ocean freight has been steadily firming during the second half of the year, although off an historically low base. The chart below show’s the Affinity Dry Index, of which the Handy-size sector (commonly used to ship logs) is a subset. This has constrained increases in New Zealand at-wharf-gate prices.

The domestic log market has continued to be strong and consistent for all grades of logs. Quality structural logs are strongly sought after in Northland, Central North Island, Nelson and Canterbury. The recent earthquake has exacerbated the Canterbury situation by limiting transport routes. Roundwood is in strong demand for both the agricultural/horticultural sectors and also for house piles for new builds and extensions. 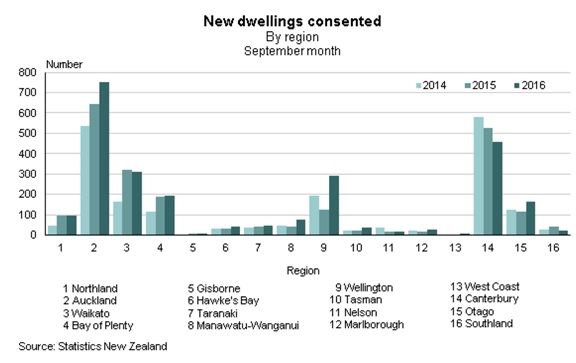 In the year ended September 2016, 29,935 new dwellings we consented – up 14% from the September 2015 year. The value rose 24% over the same period. The regions posting the strongest growth in consents are: Auckland, Wellington, Otago and Manawatu-Wanganui. 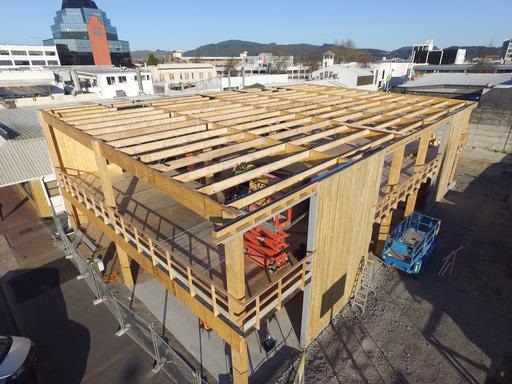 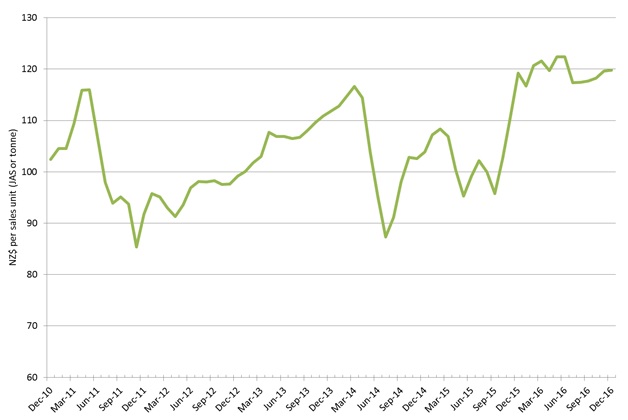 Waiting for FORESTLANDS to put out their latest update on their forests.Hope the news is all good for shareholders