Allan Barber reviews a cross-party review of how to achieve climate targets, one that will entail a difficult transition for rural economies

Allan Barber reviews a cross-party review of how to achieve climate targets, one that will entail a difficult transition for rural economies 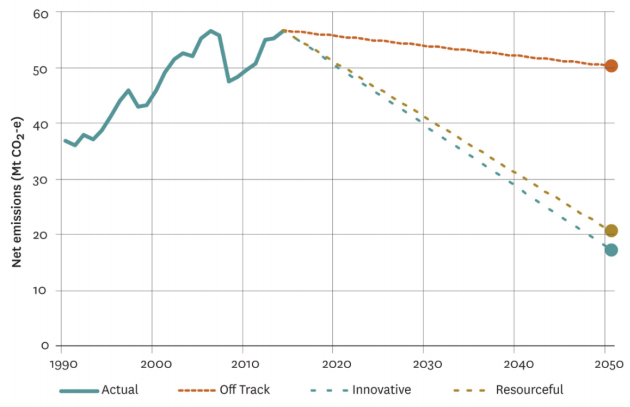 GLOBE-NZ, a group of 35 MPs from all the main parties, has released a report by UK firm Vivid Economics which lays out various scenarios for New Zealand to meet the target of zero emissions by 2050.

Business New Zealand and the Sustainable Business Council have both welcomed the cross party initiative, saying it gives confidence there will be collective and coordinated action towards meeting the target.

It will also help to achieve commitments under the 2030 Paris climate change agreement to reduce emissions to 20% below the 2005 level.

The report, Net Zero in New Zealand, acknowledges this country’s unique characteristics: a significant amount of renewable energy, large share of land sector emissions (i.e. methane from sheep and cattle) and a large forestry sector. Biological emissions from pastoral agriculture represent almost 50% of New Zealand’s gross emissions, more than any other developed country. Forestry provides great carbon sequestration potential, currently 30% of gross emissions, but much of the sector is in private ownership which makes it susceptible to commercial pressures.

Vivid presents three alternative scenarios, the first of which named Off Track New Zealand exploits low-cost reduction technologies without significantly cutting agricultural production and consequently does NOT meet the zero emissions target. The other two scenarios, named Innovative New Zealand and Resourceful New Zealand, both meet the target in different ways; the first implies a 25-30% reduction in livestock numbers and a shift away from pastoral to arable, horticulture and forestry, while the second envisages an even greater transition to forestry with an additional 1.6 million hectares. The report notes apologetically this may entail a difficult transition for rural economies.

The report also acknowledges the risk of a reduction of New Zealand’s food production being offset by greater, and less environmentally efficient, production elsewhere. But it then poses another more positive outcome, as the world changes systems to meet emission targets, which sees ‘substantial changes in the global patterns of food consumption and production. These could include reducing losses and waste in the supply chain; changing diets from animal products to plant-based food with equivalent protein content; and a reduction in over-consumption.’ Pigs might fly is a tempting reaction to at least two of these changes.

The conclusions are quite simple: reducing emissions will involve major changes to energy supply and use, including increase from 70% to 100% renewable, vehicle electrification, heat sources, substantial land use changes and afforestation with the benefit of new technologies. The final conclusion is the need for different strategies in the second half of the 21st century in the event further emissions reductions are required, as by then forestry will have delivered most of its benefits.

This report clearly has no formal standing and there is no guarantee the present or any future government will make the decision to implement or initiate further work on the recommendations. But it is logical to expect moves in the general direction indicated, either as recognition the Paris target has no chance of being attained without significant change or in the event of a Labour/Greens government which would almost certainly have no compunction about including agriculture in the ETS.

It is always tempting to use averages and coarse statistics, but in New Zealand agriculture’s case the specifics show sheep and prime beef have declined by about 25% and 20% respectively while dairy cows have increased by a similar percentage over the last 10 years. This suggests the sheep and beef sector will achieve the target of its own accord by 2050 without government encouragement, although an increase in farmer income would of course be welcome.

However nothing positive will happen without leadership from both government and industry. It isn’t enough to adopt far-reaching recommendations or regulations that expect farmers to reduce herd and flock size without a compensatory replacement of income. This is presumably where market support would be necessary to avoid thousands of insolvencies, accompanied by a collapse in farm values, unless compensated for by mass forestry plantations. The report sees opportunities in agriculture such as improving low-performing farms, breeding lower-emissions livestock and taking advantage of new feeds, all of which have been talked of before.

This brings me back to leadership. Government must engage with the sector to develop a workable strategy which will gain the commitment of all participants and agree to a course of action consistent with New Zealand’s global obligations. The GLOBE-NZ cross party group is the first constructive attempt to avoid party politics, but it requires a mandate to continue its work. It is essential that Beef & Lamb and Dairy NZ develop their respective positions on this issue; otherwise the sectors may end up being forced to comply unwillingly with decisions made by others. The climate change debate won’t disappear, so the government will have to act.

"This brings me back to leadership. Government must engage with the sector to develop a workable strategy which will gain the commitment of all participants and agree to a course of action consistent with New Zealand’s global obligations"
Why the goverment? We dont have any global obligations, the british empire was defunct by 1960
Noone cares, sort it out yourself. Go broke if necessary.