With the Reserve Bank starting to run out of room to further cut interest rates, ANZ economists are calling for the central bank to soon unveil what its plans are for 'unconventional' monetary policy

With the Reserve Bank starting to run out of room to further cut interest rates, ANZ economists are calling for the central bank to soon unveil what its plans are for 'unconventional' monetary policy 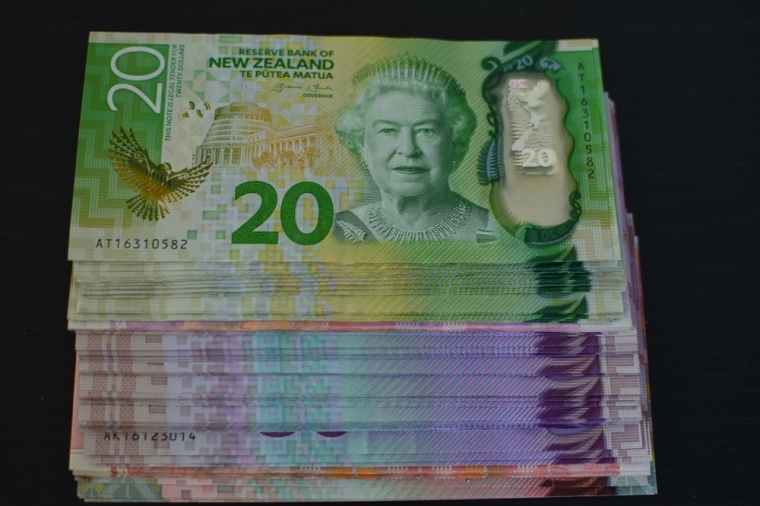 ANZ economists are calling for the Reserve Bank to clearly lay out as soon as possible what its plans are for 'unconventional' monetary policy, as the limits of interest rate cuts start to approach.

When releasing its latest Monetary Policy Statement (and slashing the Official Cash rate by 50 basis points) on Wednesday the RBNZ indicated it was well advanced with plans for the so-called unconventional monetary policy that could be activated as the limits of OCR cuts are reached.

But the RBNZ wouldn't outline at this stage what it was specifically looking to deploy.

"Let’s hope that a possible plan for unconventional monetary policy is shared publicly soon, so that financial market participants and households can be confident of a smooth rollout of extra stimulus. And with the recent cut to 1%, and an even lower OCR widely expected, the clock is ticking," they say.

Callaghan and Parekh say there are several unconventional policy options that the RBNZ could take, which were included in an earlier publication they had produced on the subject and which are also included in the table below. 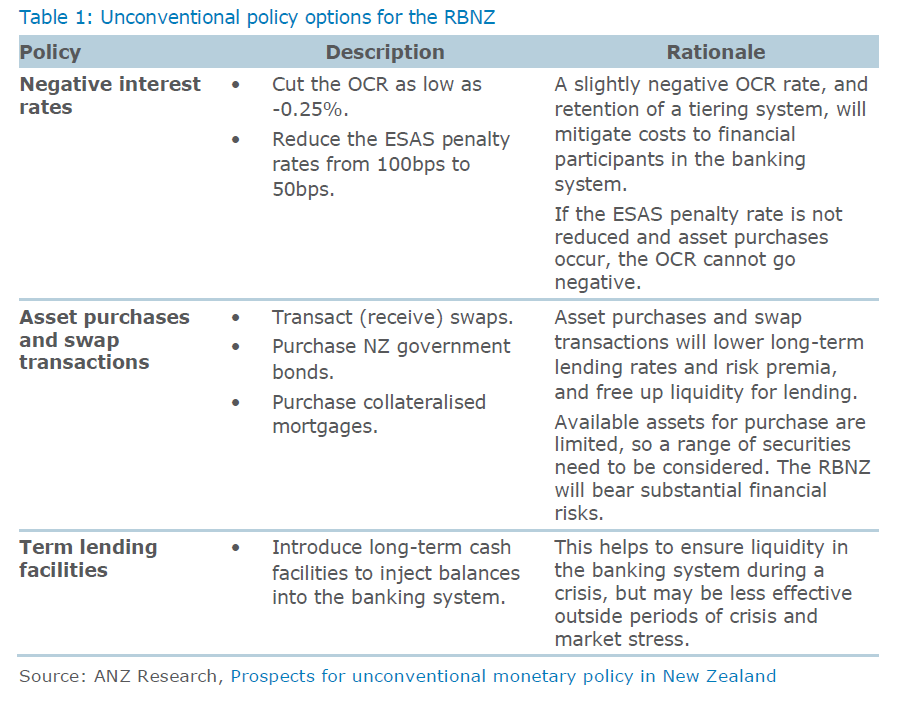 "There are also several challenges that the RBNZ will need to navigate and address, including risks to the central bank balance sheet, the consequences of a deterioration in bank profitability, and an impairment in market functioning," the economists said.

Callaghan and Parekh said the effectiveness of monetary policy will diminish as interest rates move lower from here.

"Although the RBNZ has claimed that monetary policy is just as effective at low interest rates, they also noted in the August MPS that recent transmission from the OCR to bank funding costs had been dampened by upward pressure on deposit rates (as banks try to retain deposit funding).

"Bank funding cost pressures will only intensify as the OCR falls from here, so there is a risk that monetary policy effectiveness does diminish as the OCR approaches, and potentially goes through, 0%. That said, there are multiple channels through which monetary policy operates – the effects of further easing on the NZD, wholesale (rather than bank) lending rates, and inflation expectations channels are also important."

The two economists noted that the RBNZ had this week quietly made a technical move that stopped New Zealand having its first negative interest rate.

They said the RBNZ "quietly repriced" a key standing facility that it has.

The repricing of the RBNZ's Bond Lending Facility (from 150bp under OCR to 100bp under OCR), prevented it trading at negative interest rates once the 50 basis point cut to the OCR had been made.

"This repricing sees the RBNZ and the NZ banking system avoid a negative interest rate for now, but not if we see any more OCR reductions. We are forecasting a 25bp cut in November and see downside risk beyond that."

And the economists say should unconventional policies like quantitative easing be adopted, they would expect the RBNZ to consider repricing the suite of its standing facilities and adjust the credit tier system.

Callaghan and Parekh say, however, that the "quick fix" the RBNZ made by repricing the key standing facility doesn't mean that New Zealand rates are currently immune to negative rates.

On Wednesday the September 2025 inflation-indexed government bond traded at a yield of 0.00%, "tantalisingly close to being the first New Zealand market rate to trade at a negative yield".

As far as ANZ thinking is concerned I am more interested in what their plans are to solve the skulduggery at the top.
https://i.stuff.co.nz/business/114825579/anz-nz-employees-trust-in-seni…

ANZ distributed the results of the “My Voice” survey to staff by email last week; a source within the bank shared them with Stuff, but requested anonymity fearing reprisal. ANZ has warned staff against speaking to the press.

Good heavens. What arrogance. I think if I were an employee of ANZ, I would tell them to 'go fug yourselves' (including the knighted one at the helm).

we could stop banks looting and making off like a robbers dog to Australia. Take away their right to create money and return it to the people, where it always belonged. Hows that for unconventional.

If we're going into unconventional monetary policy, why not just hand out stimulus checks to people to spend rather than handing more money to asset portfolios and having it not be spent and not stimulate the economy? Either essentially becomes a form of middle-class welfare anyway, but in the former at least it is more likely to get spent.

Or, build some infrastructure.

If the RBNZ continues to try to punish savers and inflate asset prices, why will anyone who does not already have land (or land they can afford to spend on, i.e. not single home owning pensioners trying to live off their savings) spend? Surely they're only incentivised to save harder, spend less.

Or, build some infrastructure.
Each party takes turns to sit in the cross-bench and criticize the other for lacking fiscal prudence; keeping the one in power clear from borrowing to spend on infrastructure. Meanwhile the Treasury dept. has created yet another commission to discuss long-term strategy when getting major projects off the ground at present is the challenge.
If inflation on housing and other non-tradeable costs continue to outpace wage growth, where does the average NZer find money to spend on discretionary items?

Helicopter money - Australia handed out some cash to everyone around the GFC. Increasing tax thresholds might be a good sustainable option too, and encourage both labour production and consumption. But these things require government action.

By all means cut rates, but we all know this is a wealth transfer to the banks whose ROE is already simply staggering ( https://www.interest.co.nz/banking/100987/rbnz-analysis-shows-big-4-nz-… ) . This is almost 3 times the UK average and there is no investment banking here, just traditional consumer and business banking. It's a scandal. So inject another $1,5b into Kiwibank and give it the scale to really compete.

ANZ may see this as an opportunity to retaliate and undermine the RBNZ.
- with a large dash of utu.

ANZ would do will to keep their mouths shut and do what they're asked.

21% debt to GDP ang government will not borrow at lowest rates ever for transport investment and won’t let AT do so either . Brilliant! Meanwhile they want public to borrow more

I like the fact their three suggestions seem to focus on the banks profitability. Its like "this is what you can do for me"...

ANZ, fresh off their push back on deposit guarantees comes up with this.

For what it's worth, I think the govt are asleep at the wheel with a lack of fiscal stimulus.
Having said that some think that they will come out with a big spend plan for the next election.
But will that be too late if our economy has tanked by then, and the govt, rightly and/or wrongly gets tarred with that fallout?

Perhaps it will come with the rebooted Kiwi build ? (Big social housing build)

Presumably this will be designed to suck up all the excess construction capacity which is going to otherwise be twiddling thumbs after this building boom goes to bust.

As you suggest this is bound to get running be for the next election.

If the economy does tank, I wonder how many potentially "out of the job" builders will put their hands up to participate in a Big Social Housing Build while simultaneously scrubbing their social media pages of comments about the "Coalition of Losers" and "Kiwiflop".

When you put money in the bank it no longer becomes yours it becomes theirs - ever tried to draw out a few K in cash? It’s not that easy, they play the anti money laundering card as an excuse. Yeah right.

Should never have been dropping the interest rates so soon in the cycle anyway. Just like trump creating an extension to a good economy and stock market by HUGELY increasing the national debt. Anyone can do that when things are gouing ok to start with.What school do these morons go to, if any??? Do they buy their fake degrees online at the trump business school?? Oh wait, that was shut down due to fraud. There will be a reckoning and it wont be pretty.

True who can tell exactly where Trump’s actions will end up negatively or positively for the average American for want of a better benchmark. But amongst all the confusion let’s not forget he did throw in some tax cuts. And yes these are said to benefit mostly the wealthy. But we have here in NZ a government that is going along with a RBNZ directive that NZr’s should borrow more! After years on years of saying NZr’s are woeful savers.
And that borrowing should be invested into NZby spending. It’s nuts! If the government wants its citizens to feed more money into the economy, then the answer is tax cuts. Those interested, take a look at the fiscal policy of the much maligned President Harding. In fact he was shrewd, very shrewd and converted an inherited looming recession into the roaring twenties. Cut extravagant govt spending, lowered taxes. Would have got my vote!

The government should just do something like reduce tax on the first $20K earned to Zero.