New Zealand's big four banks have the second highest return on equity (RoE) among banks in comparable small, open economies, according to the Reserve Bank.

Documents released by the Reserve Bank under the Official Information Act show ANZ New Zealand, ASB, BNZ and Westpac NZ with an average annual RoE of 18.4%. That tops the 16.7% of their Australian parents, and is below just Canada's big four banks with an average of 20.3%. In contrast the average RoE across five NZ owned banks - Kiwibank, Heartland Bank, SBS Bank, The Co-operative Bank and TSB - comes it at just 8.8%.

"The data show that the four large New Zealand banks’ average return on CET1 [Common Equity Tier 1 Capital] was the second highest amongst this peer group, behind Canada," the Reserve Bank says.

"Combined with leverage around the peer country average, on average this generates the second highest return on CET1 in the peer group, 18.4% after tax. Canada has a higher average post-tax return (20.3%) which under this methodology can be explained by the Canadian banks operating at a higher level of leverage than New Zealand banks. The small New Zealand banks operate at lower levels of leverage, and with higher cost structures than the large New Zealand banks; this leads to the lowest return on CET1 in the peer group," the Reserve Bank says.

The large discrepancy between the RoEs of the big and small NZ banks is not news, per se. This is highlighted in the Reserve Bank's Bank Financial Strength Dashboard figures every quarter, and stems at least in part from a major capital advantage the big four banks have over their smaller NZ owned counterparts. The Reserve Bank's proposed changes to bank capital requirements are would narrow this advantage.

Meanwhile, the Reserve Bank goes on to say operating expenses per dollar of credit exposure are, on average, twice as high at the small NZ banks compared to the four major banks.

"Kiwibank, for example, generates approximately the same net interest and other revenue as the four major banks per dollar of credit exposure, but spends twice as much on operating expenses to achieve this revenue. Leaving its revenues and leverage unchanged, if Kiwibank were hypothetically able to match the four large banks on operating expense efficiency its RoE would increase from 8.2% to around 17.4%, higher than BNZ and Westpac NZ," says the Reserve Bank.

The Reserve Bank's findings on the profitability of NZ's big four banks tie in with analysis done by interest.co.nz for several years. For many years the Bank for International Settlements (BIS), the central banks' bank, measured the profitability of major banks in a range of countries across a series of measures. For six consecutive years until 2017 interest.co.nz crunched the numbers for NZ's big four banks and added NZ to the BIS bank profitability benchmarking table. (We weren't able to do this in 2018 or 2019 as the BIS annual report didn't include the bank profitability benchmarking table). This exercise consistently showed the NZ banks near the top of the pack when compared to their counterparts from both advanced economies and major emerging economies, and ahead of their Aussie parents. Our articles on this can be found here.

Meanwhile the Reserve Bank says while its RoE analysis is useful background information for its review of bank capital requirements, it is neither the motivation behind the capital review, and nor is it being used as an input to determine the appropriate capital framework for NZ banks.

The Reserve Bank proposals announced in December would see NZ banks - led by ANZ NZ, ASB, BNZ and Westpac NZ - required to bolster their capital by about $20 billion over a minimum of five years. (For background and detail on the proposals and bank capital in general, and the nuts and bolts of what's proposed, see our three part series here, here and here.  Additionally the Reserve Bank proposes to designate the big four as systemically important banks meaning they'd have capital requirements above and beyond other banks). Final decisions in the capital review are expected in November. 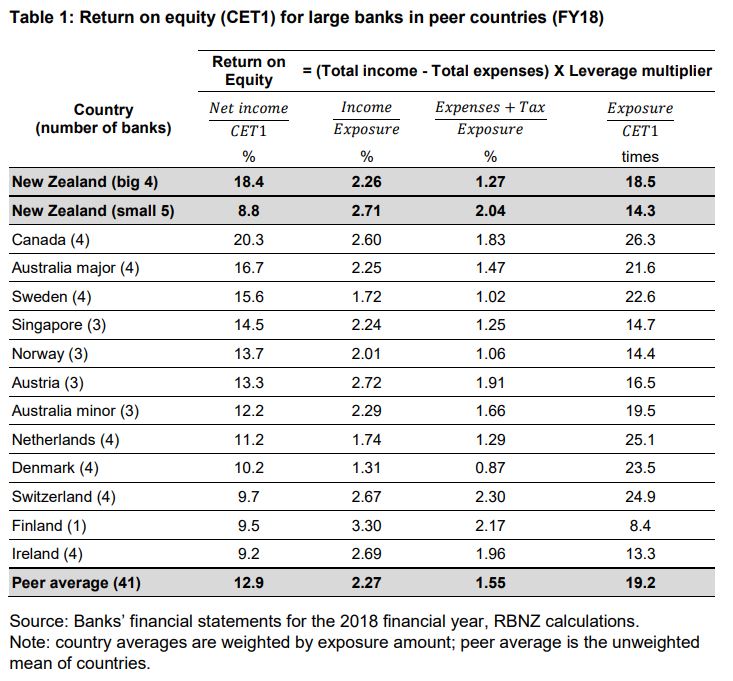 Much in the same way the Vikings were very profitable along the east coast of Britain once.

I'd much rather my bank made a profit than a loss. Come on Kiwis we can beat Canada!

Make profit and repatriate overseas, instead of shoring up capital and reserves ?

A little question because it would be interesting to find out. Are the CET1 ratios calculated by the RBNZ before dividend payments are made by the banks, which I presume would reduce the equity level of cash on the books, or after dividend payments?

Quite concerning, 1 year foreign bank profits from NZ $5 Billion, would take 10 years for our largest exporter Fonterra to earn.

So in 10 years time, 2029, Foreign Banks would have sucked the Fonterra profit earnings to the year 2119.

Last one out turn off the lights !

Put another way, if Fonterra exports are $20 Billion per annum to earn $500 million profit, Foreign Banks have the equivalent of $200 Billion turnover.

Nearly the entire NZ GDP, which is impossible.

Well, not impossible for NZ of course, which I wonder is this why Foreign Banks are stacking their Boards and Management with ex NZ Politicians.

Who has got the mettle to stand up to this economic rort.

RBNZ stands no chance. Scary, aye.
Remember, Banks in the US brought on the last GFC in 2008.

Leonardus - How much capital has Fonterra got invested here to earn the returns (admittedly very poor ones) that they make, anywhere near the $28 billion the Aussie banks have invested here ?

How much profits were repatriated by the banks during the last 5 years ?

Imagine how much profit the Aussie Banks would make if they didn't have to sponsor our sports teams.