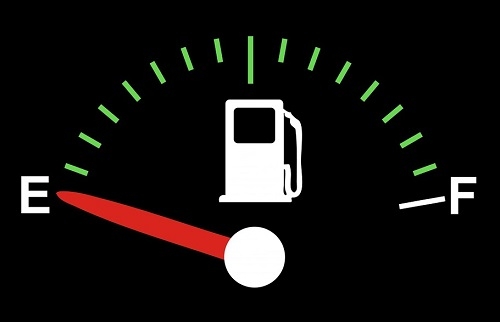 Substantially lower crude oil prices over recent years has been the dominant factor in producing very low inflation in New Zealand and thus lower OCR interest rates from the RBNZ.

Therefore, why has the big rebound upwards in crude oil prices not forced higher petrol pump prices and larger increases in inflation?

Over the last 12 months crude oil prices have recovered from lows of US$30/barrel to US$50/barrel (West Texas Index – WTI).

Whilst that crude oil price increase is very large in percentage terms, the petrol pump price here in New Zealand has only increased from $1.70 to $1.90 per litre.

A stronger NZ dollar against the US dollar from 0.6500 to above 0.7000 is part of the explanation behind the seemingly much smaller increase in our pump prices.

In addition, refined fuel prices only make up 29% of the local pump price, the balance being Government taxes, distribution costs and the retail margin.

The spread or margin between crude oil prices in NZ dollar terms and our local petrol pump prices has not really changed much over recent years (refer chart below).

Without pre-empting the results of the investigation, the very small increase in margin over recent years is probably due to higher internal distribution costs. 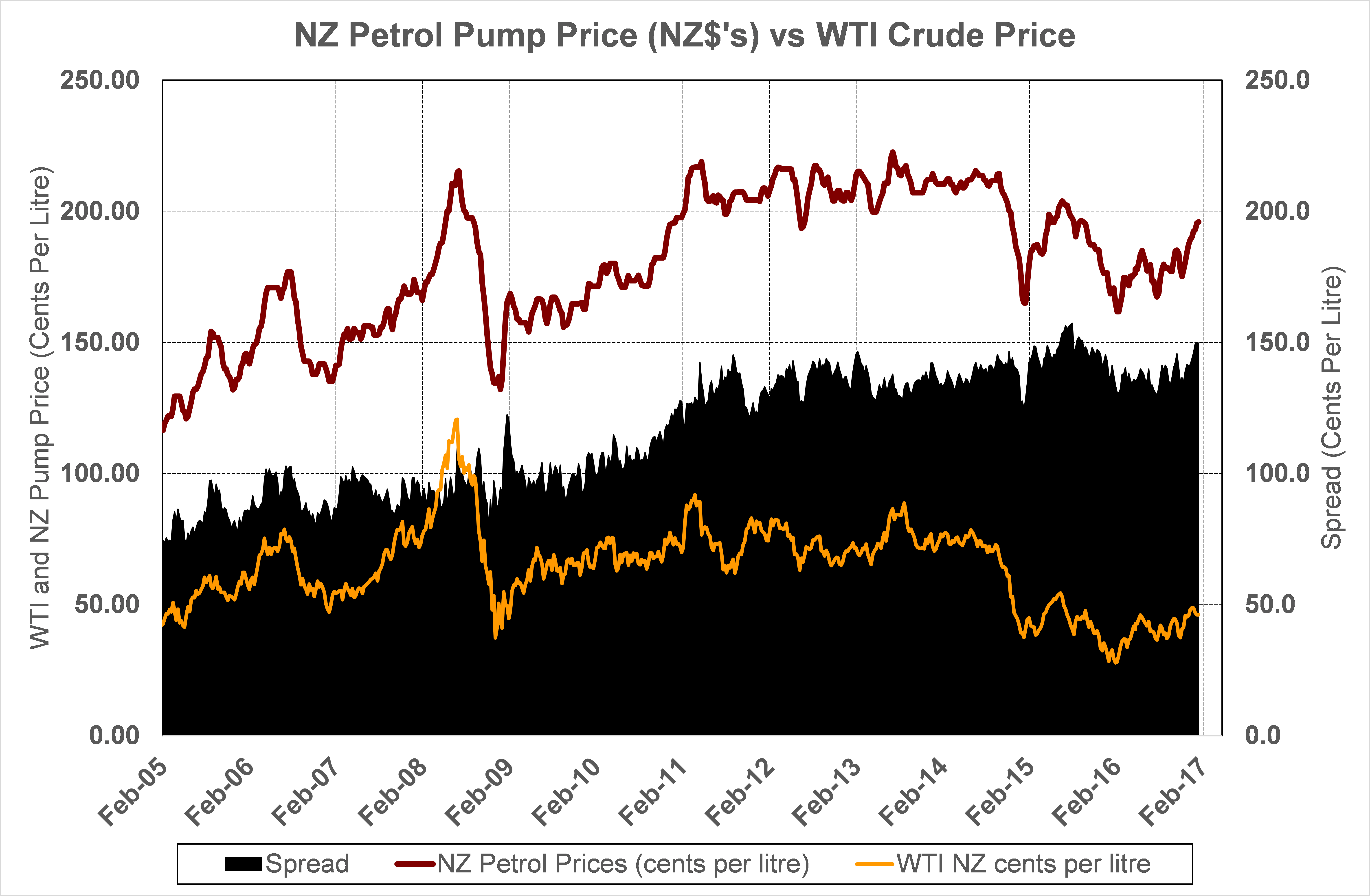 Roger, have you looked at the charts?"The spread or margin between crude oil prices in NZ dollar terms and our local petrol pump prices has not really changed much over recent years (refer chart below)." The spread is the black bit in the chart, and by my read it has gone from 75 cents to 150 cents. Thus it has doubled!

Not what I'd call 'not really changed'!

Goodly chunk of that would be gst and excise increases yes?

I believe that's the case. Of course what investigation is going to do anything but fluff around the edges rather than point the finger at their greedy masters?

The reason margins have risen is because they
we're too low previously.

That's why Shell and Caltex sold out.

Where is the matching concern for the shareholders earning inadequate returns.

Today - despite the high excise duties massive exploration and production, transport and refinery investment - gasoline is still cheaper than Coke.

Let's have an immediate enquiry into fizzy drinks.
Makes as much sense.

Usual election year crap with more on it's way.

What's an inadequate return? Any business only needs to make $1 in profit. If shareholders don't like the return, then go and buy another company's shares. Business's need to understand that they are part of society. If they put their success (profit) ahead of the needs of society, or at the expense of society then they will shepherd the collapse of the business, society or both. Something we a looking at the initial signs of the world over. Greed is ultimately destructive.

As a long-term Stockmarket investor,I believe absolutely that companies can best serve their shareholders' long-term interests by putting their staff and customers first,
However,I have to disagree that a $1 profit is sufficient for any company and would be good for all its stakeholders-employees,customers,suppliers and shareholders.

There are plenty of property investors that believe $1 of profit is too much. Their longevity is always in question though.

I can't help but smile at the response I got. But $1 dollar is all that is required after all costs including future projected ones are considered. Most people will struggle to fully identify all costs, so a margin better than $1 is necessary, but needs to be held as retained earnings. But as so many responses indicate, most shareholders would not tolerate barely breaking even as the model we peddle these days requires continuous growth to stay ahead of the predators. This model is significantly flawed as such growth in a finite world is a freeway to disaster. So all this comes back to a well worn platform for me - a regulated market to restrain rampant greed is necessary. It would be difficult and painful to introduce these days, thirty odd years out from the introduction of the Free Market, but necessary none the less. Cadbury's is a good example of why.

Actually producing profits does not mean that it is dependent on growth. In fact if a company produces dividends but the share price does not increase it can still be providing sufficient return on capital. There are plenty of property investors who ignore returns which places them as risk. From my perspective the western experiment with financialising housing is risky and adds nothing to any economy. Finance should be focused at productive activities rather than collecting rent off an increasingly impoverished population.

Interesting case in point will be the he future fate of Cadbury. From what has been written about he Factory in Dunners was still profitable, just not as profitable as they want. So not only are they now peddling a crap low end product they are adding in the we wish screw you even further. Whittakers simply can't lose from here, can they?

Thank you for illustrating why there is no need for an enquiry in fizzy drink prices. Fizzy drink market has competition and starting at 70cpl cola is way cheaper than petrol , even coke brand at 1.60cpl thats still cheaper.

Govt could start with not allowing one company to have 50% market share.
What is a normal margin? Is this margin coming off a low or a new peak.
What about the volume and cost side of the equation, if it was that great wouldn't companies be coming to the market rather than pulling out?

I keep reading in SPEIRS GROUP reports how their profit is dictated by how much the supermarkets will pay for their products,but who else can they sell to.Catch 22 situation,put price up and new players will come into the market
Maybe their should be an inquiry into what supermarkets pay their suppliers,oh thats right theres been one,everthing ok in the world of duopolies.

Recently it seems we have some competition in the retail end, which has shown some interesting change. eg. Central Otago having cheaper headline prices than Dunedin. Central is as far from port as you can get in New Zealand and the Dunedin stations are in sight of the portside oil wharf. Unusual indeed.
But of course the real monopoly control lies in the bulk supply. The big companies are quite happy to let the local entrepreneurs fight it out at the internal distribution and retail. But they retain control on the bulk supply coming in over the water.
If import is still under the control of the big companies there is endless opportunity to rort us on transfer pricing etc etc. And if they can rort us if they sure will.