Roger J Kerr says he would be cautious about over-reacting to one quarter's inflation result that appeared to have several one-off, non-recurring, price decreases

Bonds
Roger J Kerr says he would be cautious about over-reacting to one quarter's inflation result that appeared to have several one-off, non-recurring, price decreases 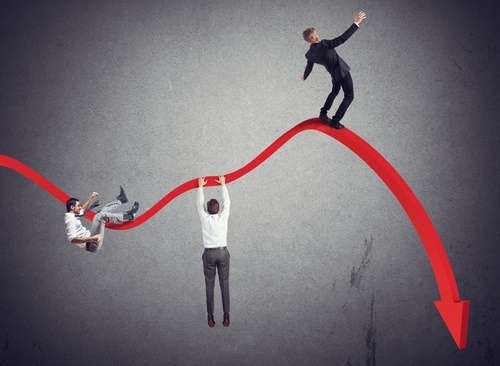 The surprise components of the inflation result for the December 2018 quarter were the price declines for clothing and other imported household goods in the retail sector (refer first chart below).

The pricing formula for used cars changed, so that also helped to push the tradeable inflation index down as well.

The price increase for fuel and price decreases for communications and food were known in advance.

Significant price discounting in a fiercely competitive retail market, coupled with a stronger Kiwi dollar up to 0.7400 against the USD six months earlier in June/July, were behind the unexpected price reductions.

Retailers were already experiencing squeezed profit margins, so the price discounting in the December quarter was surprising and clearly not picked up on by economic forecasters.

One explanation is that bricks and mortar retailers were clearing out old stock before the arrival of Amazon’s on-line attack.

The threat of Amazon may be overstated, however, as Australian retail data suggests that the traditional retailers more than held their own over last Christmas.

The subsequent depreciation of the NZD against the USD to 0.6800 in October/November suggests some increases in tradeable inflation (imported stuff) in the June and September quarters this year (refer second chart below).

Some economic forecasters have now pushed back their first OCR increase into 2019 to be more in line with the RBNZ’s view of life.

I would be more cautious about over-reacting to one quarters’ inflation result that appeared to have several one-off, non-recurring price decreases.

The interesting part of the inflation forecast puzzle for this year is if, and when, wage increases across industry sectors feeds into pricing behaviour. 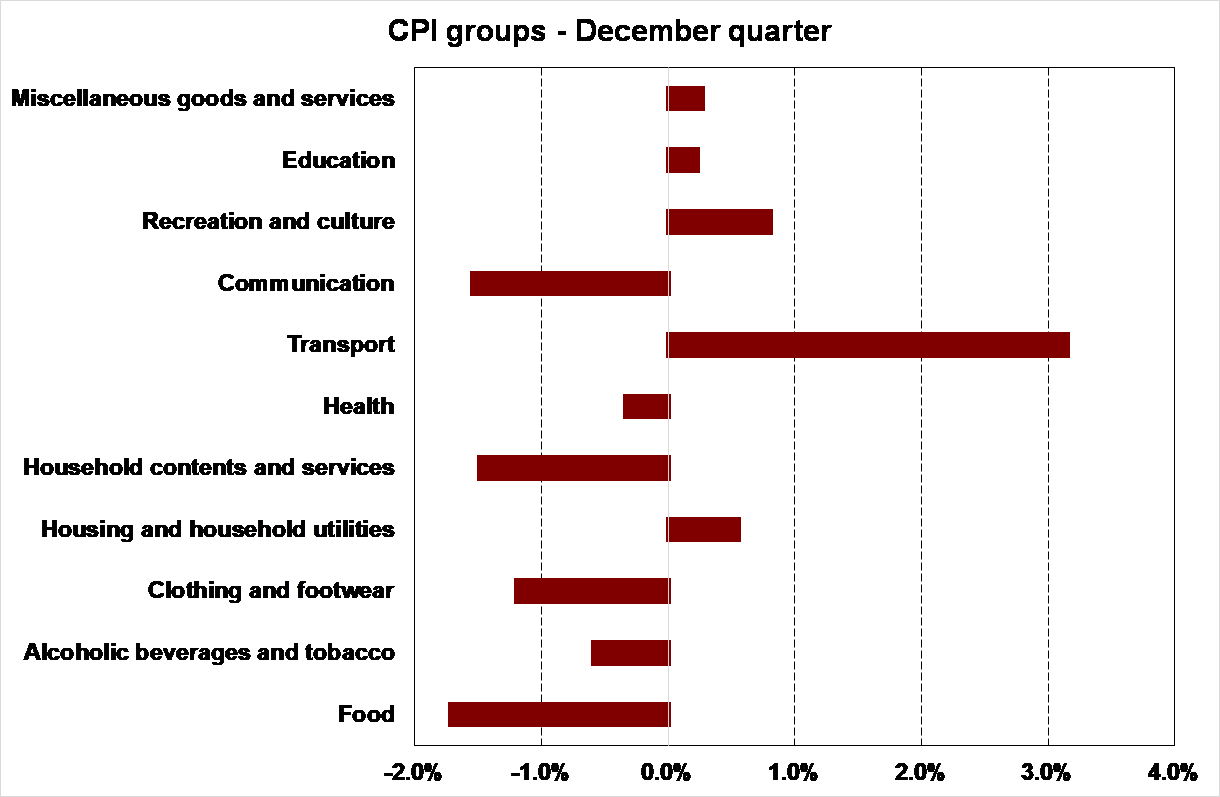 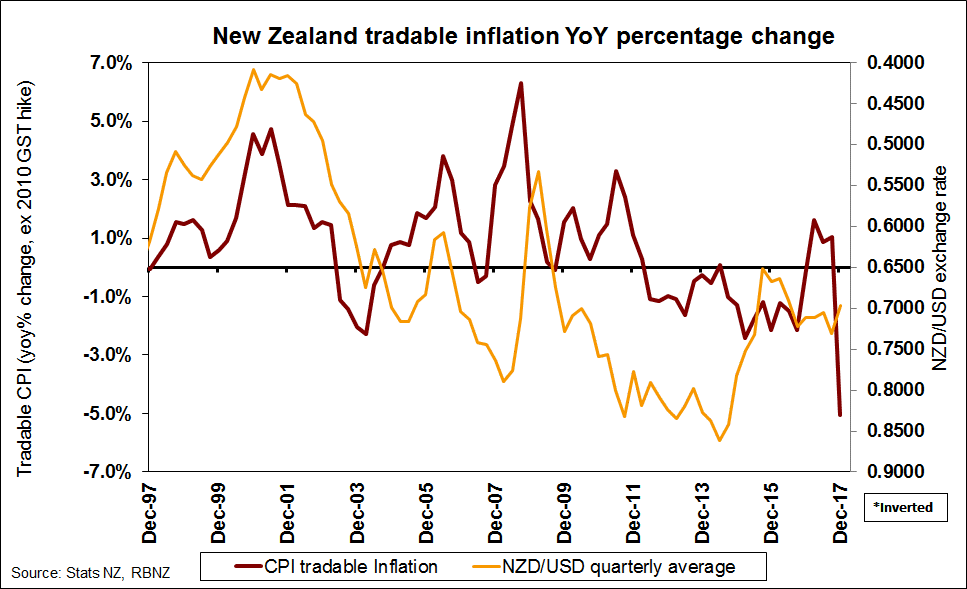 You forgot to include rates and insurance in your chart. Asking around most peoples insurance is going up %20+ and thats goes for me, rates are looking at about %5-6 around here.

Its best to teach your children the best payed jobs are being part of the apparatchik.

Andrew , Insurance cost increases were a once -off when the methodology changed after Chch earthquakes . Its not long -run series of increases

And rates increases have been benign for some years , although this may change soon

Being part of the apparatchik still makes you part of the small fry funding the rest of society. The true best tack is to be an owner of large amounts of capital or land, and the wherewithal to structurally reduce or eliminate -
to all appearances - income. As Trump says, not paying taxes "makes me smart".

And the best way to get there is with other people's money. Persuade some people to invest in your idea, take a bunch of money out and stash it in you or your partner's trusts, then "oh dear, how sad, the company fell over", and avoid paying your creditors (including, of course, the evil taxman).

Get the benefits of social democracy, without contributing to the costs. Voila!

I have a great deal of respect for Roger Kerr , but I cannot avoid disagreeing with his overall idea that inflation is some kind of bogeyman that is suddenly going to rear its ugly head soon .

The reality is that prices of goods and services overseas are way cheaper then here , and as long as we have an open economy and strong currency , we will not see inflation that is of concern , anytime soon .

There is cheap money everywhere , there is excess capacity everywhere , and with regards to oil the price reflects either dwindling demand or a glut

We are benefitting from this here in NZ .

For example , I recently scratched my spectacles , was quoted $130 each for a new lens in Auckland , and have mailed the specs to Specsavers in Asia for the lens to be replaced for just $15 , plus $19 postage .

I have not got them back yet , but hey its a massive saving .

If anything , we are likely to see downward pressure on prices of not only goods , but also services in NZ

Finally , house price inflation was being driven by immigration and land supply constraints and we are likely to see house prices come off their highs slowly and steadily over the next 3 years now that these issues are being addressed

Gotta wonder, though, when and over how long world-wide quantitive easing will unwind, and what effects this will have. Huge debt has been loaded into asset prices based on the promise of future growth, but that's yet to eventuate...We've borrowed from the future.

Things are cheap, we have a surplus of cheap, useless junk while the core purchases of life are getting far out of the reach of many in society.

Yes prices of goods and services are getting cheaper. But at what cost quality?
Electronics and whiteware in particular. Sure, our flatscreen tv that we replaced recently because the last one just went 'poof' one day, same size, some more features, $1k v $2.5k. But the $2.5k tv only lasted about 7 years. Does the cpi basket adjust for durability of household goods?

Mate just had great success with a lens implant, 5k an eye.

Here you go, my friend was in his 70's and said it's the best things he done for years.

Labour are promising a 30+% rise in minimum wage over 4 years. That has to cause either inflation or unemployment.

I'm leaning more towards the unemployment , due to continued efficiencies and technology in areas like forestry, where there are hardly any men on chainsaws, which happened in a hurry probably spurred on by Heath and safety. More AI in check out areas, more online options and direct marketing. The media still has it's day of reckoning to come.
Also I don't think globalisation hasn't finished with us yet

For instance, and I never thought this would be a reality. On my farm I can program a quadrotor to check the water and stock, on a gps grid pattern. I always thought that would be expensive and a bit of a geeky option.
Well it's here, for a couple of thousand dollars I can get a quadrotor with enough battery to go around my farm and check everything. My pump has a sensor linked to a phone, which texts me any changes to volumes pumped, or pressure. Self drive tractors are on the market, sensors are enabling more mechanisation where once you had to do it hands on. Two of my friends have self drive lawn mowers which do a remarkable job.

Now Im getting worried where I fit into this new world.

Just had our puppy chew my glasses - pls could you post details of Asian specsavers you used..

What we are experiencing now is actually the low side of the long term range (300 years say), the reason for such a stimulative MP environment is to actually offset the ageing demographics, without stimulus at these levels, we would have headline deflation, without a doubt.

There is a great quote around demographics that I love, as of Q1 2017 "For the first time in recorded history, there are more people in the world aged over 65, than there are aged under 5"

We will get inflation eventually, but there is a very reasonable case for an even more deflationary headwind in the next 10 years, especially so for New Zealand.

lalaland, Agreed, and I have made the same point several times myself too. The particular demographic affect of boomers retiring is unique; biggest ever cohort, holding large proportion of asset wealth, following period of low/slow wage growth for all the younger generations over the preceding decade, and a shrunken younger than 60 middle class globally, with lower home ownership rates. Where/when can inflation come from?

Agree with above: insurance premiums are going through the roof!

Shocked at the level of house insurance premiums. It's like paying a rent!

I wonder how many home owners are having to cancel their policies??

With insurance merely a reflection of 1) cost to replace [houses being so overpriced in NZ] and 2) risk and cost of reinsurance [is there any part of NZ not prone to massive disaster risk - EQ, Volcano, Flooding coasts] it's no wonder insurance increases.

Add to that the lack of an economy of scale and presto.

Any home owner that cancels their policy deserves to have their head read. These are the people that go on news afterwards and whinge that all their stuff is gone and someone else should bail them out.

Roger, hang in there!
A pundit on CNBC tonight – you’re going to get your US 10YR over 3% before years end - no questions apparently.
Is there even life after that – knitting?

Insurance cost are only going to keep on rising, still I'm now out of that because my house caught fire last year and its toast. Big lifestyle change for me, now living out of a suitcase but you sure save a lot of money!