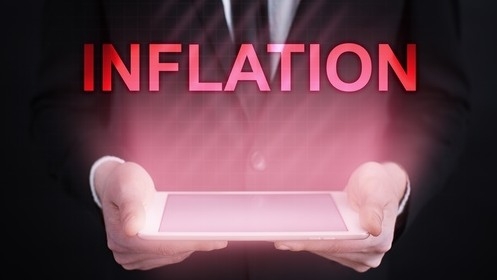 BNZ economists say inflation expectations will continue to keep "nudging higher" and they expect actual inflation to get close to 3% later this year.

"This is consistent with many other 'core' inflation indicators that have returned to around the 2% level – central to the [RBNZ's] 1.0 to 3.0% target band and, in our view, are biased to keep strengthening.

"We would expect the inflation expectations measures to keep nudging higher, given their tendency to follow actual inflation (rather than be purely forward-looking). "

Ebert says the BNZ economists expect annual CPI inflation will "bump up" to 2.5% at next quarter’s release, from 1.5% at last read, and will be getting close to 3.0% by the end of this year.

"It will take a determinedly dovish central bank to look through all of that, with its cash rate right down close to zero. 0.25% is not the new normal for the Official Cash Rate, as RBNZ officials intimated at last week’s Financial Stability Report, during its assessment of risks."

Wage inflation is another area where expectations have firmed up, Ebert says.

"To be sure, these are not strong results. But they have clearly firmed up, from a significant low a year ago, to now be about what they averaged the 10 years preceding Covid-19."

Ebert noted the "so-called" public sector pay freeze (for incomes above $100,000), announced last week as something to be aware of.

But he said in other ways government policy "is serving to stoke wage inflation", including by way of ongoing strong lifts in the minimum wage and, in time, the Fair Pay Agreements framework outlined last Friday, which would give more power to unions.

"In the least, we might expect (private) wage inflation expectations to keep lifting, given how tight the labour market has gotten already (with a 4.7% unemployment rate confirmed last week for the March quarter of 2021)."

Ebert thought that perhaps the most interesting result in last week’s RBNZ survey, however, was house price inflation expectations.

"Had they flattened off, even gone a shade negative, many would have sheeted this home to the government’s housing (tax) policy announcements of 23 March.

"This coincides with little evidence that house price inflation has been killed off by the latest (in a long line of) government policy designed to bring the market to heel. As this list has continued to grow, interest rates have fallen to extremely low levels."

However, Ebert says it’s not just various inflation expectations that have been either resilient or have firmed up.

"Expectations on activity growth have strengthened. This was clear in last week’s ANZ business survey, which took a big step into above-average territory in May, with every component looking upbeat to strong now, rather than just generally okay. Pricing intentions hit a record high."

Commenting through the lens of the human condition, Charlie Munger said:
"Show me the incentive and I'll show you the outcome."

Surely this is the real danger of inflation.

"Show me the incentive and I'll show you the outcome."

The OCR must be raised immediately up to pre-Covid levels. At least 1% immediately, and then progressively to at least 2.5%. Not raising the OCR right now will simply mean having the RBNZ being forced to raise it to a much higher level later on.
The RBNZ must act NOW.

The same survey panelists sees the OCR 1 year out at 0.31 percent, barely unchanged. The RBNZ will take the OCR negative within the next 18 months.

Orr would 'look thru' 5% inflation im afraid. The global central bankers clearly have a set agenda. But yes, I think the emergency 0.25 OCR is well overdue for correction upwards.
I wish I could look thru 5 to 10% rises on many of my items, and I bet the FHBs wish they could look thru the 20% house rises !!

I am seeing more and more economic and political reasons for inflation up, not down.

Hey fortunr, raising the OCR to pre-covid level has been my call for a while now

Fortunr: if only we didn’t live in a global environment with floating currencies. The rbnz will raise predictably along with other central banks.

The trick is knowing what magic spell to cast to ensure house prices stay static.

Also your implication is that interest rates stay low (to allow for the inflation to occur), which means anyone who is trying to save money in low-risk assets (eg bank deposit etc) would also be going backwards in terms of real wealth, if everything else (except house prices) inflated.

actually i was thinking interest rates rising -- which would pressurise the housing market considerably -- dampen it - but could also lead to higher wages and therefore the DTI ratio improving -- although the challenge would be managing the inevitable increase in CPI - food, clothing, fuel etc - but at the moment without a mighty large POP - not sure how the bubble bursts!

"BNZ economists see inflation getting close to 3% by the end of the year..."

If Mr Orr feels that it will be 3% or for that matter even 4% not worry as he will shift the goal post to send message that everything is under control.

As it is, the way inflation data is calculated is to suit their narrative as they exclude what they are uncomfortable in calculation. Reality is that if the inflation data is 1% than for average person is atleast 7 times more if not 10 times on average - Ask any common person and will vouch, how much their house budget has increased.

3 percent??? come on! go to the shop, petrol station, visit car mechanic, try to build something! This is all before we even mention HOUSING. Ridiculous...

as you say,the real CPI isnt a secret locked up in a safe at RBNZ,we see it every time we spend at the gas staion,dentist etc; at least when they know its getting hard to put bread on the table they dont say "let them eat cake" and are more diplomatic and say "its not a problem if you are travelling first-class"

I guess they'll be looking through the fuel tax increase and RUC increases in the last 12 months too, food, transport, etc.

Where's house price and material cost increase effect and the result of the 20.00 minimum wage.

My 1/2 strength chai latte with trim price is getting outrageous.

but your avocados are cheap at teh moment

This covers all the bases: https://www.lynalden.com/inflation/
American focus yes but we follow them as always.

"If we approximate the cost of living the classic “American Dream” solid middle class life of a spouse, 2+ kids, a single family home, healthcare, university, a car, an annual vacation, and quality meals, I find it hard to match that to the reported CPI over the past three decades. The big expenditures that make up 60-70% of the typical household annual expenditures went up faster than CPI, and could not have been offset by disinflation in the remaining smaller categories."

Its the discounted effect security of a govt backed investment.

Because bond rates are being kept artificially low by the brrrrrrrr

Another episode of where it's going. https://www.rt.com/shows/keiser-report/523152-housing-price-planet-ponz…

Banks are just devious as ever and wanting their lucrative interests arbitrage back.

Just cut the benefits and send those on the dole onto farm work and inflation will taper.

I don't want them on my farm. They not on dole for nothing. Farm work is already hard enough

Has anyone got an independent list of NZ prices of a basket of items from 1-2 years ago and current price?

I saw someone posted a Pak n Save shopping list from a year ago on another Interest thread and the prices has moved sideways.

anybody who thinks grocery prices have been static for 18 months hasnt bought anything in a can from watties,fresh fish or decent brands of bread,beer etc;