Would insurers be this risk-adverse had the country's competition watchdog prevented the market from becoming so concentrated? The just-exited ComCom Chairman believes they would

Insurance
Would insurers be this risk-adverse had the country's competition watchdog prevented the market from becoming so concentrated? The just-exited ComCom Chairman believes they would 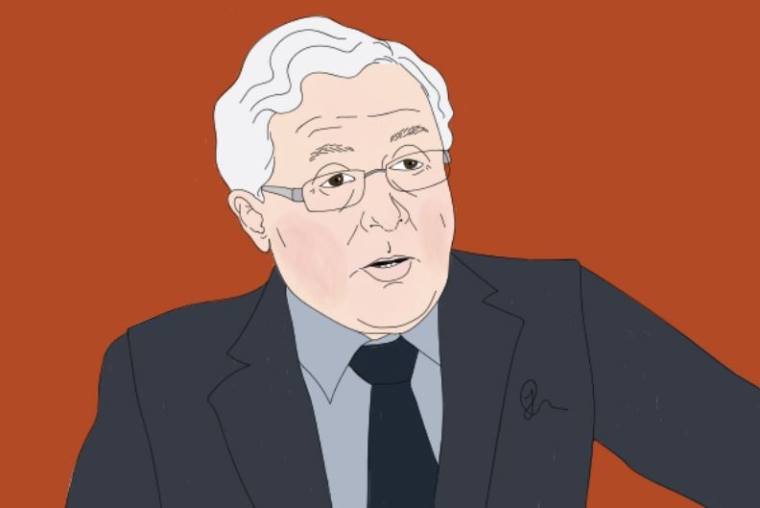 Mark Berry has ended his second and final term as Commerce Commission Chairman confident general insurers would be behaving the same as they are now had he prevented one Australian insurer from being able to dominate more than half the market.

The competition watchdog in 2012 approved IAG’s application to buy the non-Canterbury earthquake affected part of AMI’s book. This saw its share of the general insurance market increase from about 31% to 40%.

Then in 2014 the Commission gave IAG the green light to buy Lumley, increasing its market share from about 42% to 51%.

However the Commission in 2017 declined Vero’s application to buy Tower, which would have seen its market share (along with its joint venture partner AA Insurance) increase from around 25% to 30%.

Berry at the time told interest.co.nz that reducing the number of major players in the market from three to two, would be moving towards a concerning level of concentration.

Fast forward a couple of years to a time when insurers are becoming even more selective over who they provide cover for - aggressively hiking premiums for high-risk customers and in some instances refusing to provide cover - interest.co.nz asked Berry whether he remained comfortable with his decisions.

“If you turn the clock back, they would be decided the same way again,” he said.

“If companies stand back and decide that they want to take a particular approach to whatever risks they face in geographic areas, these companies will simply play that out the way that they want.”

In other words, Berry believed insurers upping the ante on risk-based pricing was a business decision that was beyond the Commission’s jurisdiction and had nothing to do with the competitiveness of the market.

The problem households and businesses face, particularly in Wellington, is that if one insurer won’t offer them affordable cover, they don’t have many others to turn to.

This chart shows the extent to which IAG, Vero and to a lesser extent, Tower, have a grip on the residential property insurance market: 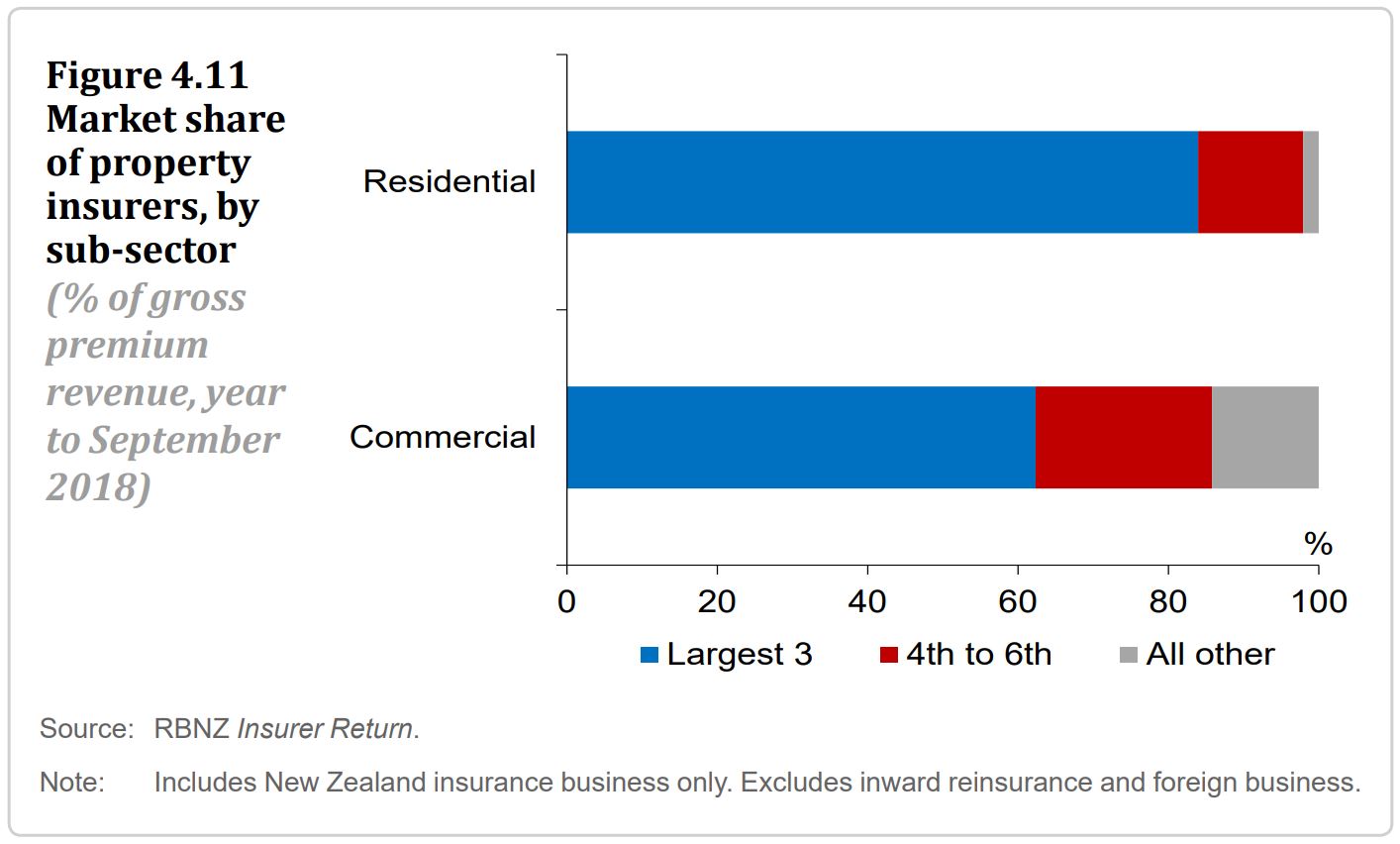 Because banks that lend against assets require those assets to be insured, banks would be left exposed in the event of borrowers not being able to get insurance and defaulting on their loans.

The Reserve Bank recognises the risks this poses to the stability of the financial system.

"The widespread availability of affordable insurance in New Zealand is heavily dependent on the ability of domestic insurers to transfer risk to global reinsurers," it said.

"If global reinsurance markets become stressed or if the global appetite for New Zealand risk declines, the cost and availability of insurance in New Zealand could change dramatically."

Repeating the comment he made two years ago after declining the Vero/Tower merger, Berry told interest.co.nz: “A third competitor does have a lot of significance in markets, potentially.

“Any regulator inevitably would start to look more closely as you go five to four, four to three, three to two.”

However in the case of the IAG/Lumley merger, he believed it wasn’t an “ordinary four to three” scenario.

“Lumley was a very small player [9% market share] with next to no direct presence in the market. It was simply having its products sold through Westpac, so taking it out really raised no particular concerns because the market really wasn’t changing.”

Berry noted that at the time Youi had also just entered the market.

“So the market was exposed to showing barriers to entry were low.

“But we had difficulty predicting how successful Youi would be. By the time we came to do the Vero/Tower merger, we had the benefit of three years’ evidence.

“So we were able to see that notwithstanding barriers to entry, something was going on in relation to barriers to expansion, which made it all the more important to preserve the competitiveness of that market through Tower remaining independent.”

In other words, Berry in 2014 thought Youi entering the market showed it was competitive. But in 2017 realised that Youi’s failure to really take off showed how difficult it was for a new entrant to expand its presence in the market.

Berry didn’t mention Youi breaching the Fair Trading Act by using dodgy sales tactics as an impediment to its growth at this point of the conversation.

However further to Youi in 2016 copping a $320,000 fine in the Auckland District Court for these breaches, he said issues around penalty levels for Fair Trading Act breaches was a “live debate”.

He noted interest.co.nz was among many others that saw $320,000 as a low “cost of doing business”.

Berry said Australia’s competition watchdog was looking at penalty levels for Fair Trading Act breaches, and believed New Zealand would likely follow Australia if changes were made there.

Coming back to insurance sector competition, Berry’s comments alluded to him being confident in Tower’s balance sheet at the time Vero was trying to buy it.

Tower was in such a bad way that at the end of 2016 it considered ring-fencing the part of its business still grappling with Canterbury earthquake claims by forming a new company.

Then at the beginning of 2017 it had to take out a $30 million bank loan to prevent it dipping below the Reserve Bank’s solvency requirements.

Yet after the Commission declined Vero’s merger application, a capital raise saw it get back on its feet.

Asked about the extent to which he had factored in both AMI and Tower’s financial standings when he considered their merger applications, Berry said: “In a situation where a company is going to exit the market - whether it’s through failure or through the evidence it will exit the market - that does impact significantly on the analysis.

"The mere fact that they’re no longer going to be there as a competitor is almost the answer in itself.”

This response indicates Berry was confident Tower would survive.

As for AMI: “We were very mindful in the case of AMI of the Christchurch book and the pressures that was placing on the company. So that’s certainly a factor that was taken into account in the analysis of that decision.”

Berry ended his term at the Commerce Commission on May 31. He has been succeeded by a Commissioner at the agency, Anna Rawlings.

Thank God he is leaving the commerce commission.
I have some sympathy with the insurance companies. ( strange but true )
They are there to spread risk. Concentration is perilous. So having most of the market in a place like Wellingon would be very nervous making. Happiness would be having ten percent.
We need a large number of companies, each with their risks spread all over the world.
Doing business with us would not make them nervous.

I think the confidence that Tower would not only survive but also continue to act as a competitive counter to
Aussie insurer dominance, was questionable at the time of the proposed Suncorp takeover and remains so.

Towers weak reinsurance buying leverage was always going to force it in a post EQ environment, into early
introduction of assertive risk based pricing, thus obliging the aussie underwriters to follow suit more quickly and
to a greater extent than would otherwise have been the case. Towers move was almost certainly the catalyst for IAGs recent and predictable ramping up of its RB pricing and underwriting strategy In Wellington.

It is possible Tower may compete a bit more aggressively in low catastrophe parts of NZ and force some rates down there but this will be to a limited extent given the cost of reinsurance is such a significant component of final pricing and an area where Tower will struggle against both the buying muscle of its competitors and the flexibility of Aussie based parents to ‘wholesale’ reinsurance to their NZ subsidiaries at prices that suit their interests, subject to transfer pricing legal constraints. Comparative operational scale and the advantage of big data will also limit Towers ability to provide more than token competition in limited market segments. They will largely be a price taker, not maker.

I don’t share Berry’s confidence ( well, as inferred from his comments and positioning) that Tower is as ‘back on its feet’ as some believe. It has booked part of a large anticipated legal action recovery from EQC, dependent on decisions going its way on some highly complex and very contentious issues. My view is there is considerable uncertainty about the outcome.

I think the move to risk based pricing was always going to happen. If insurers are subsidising risky areas by overcharging in others, they are risking another company taking their customer base in the areas they are overcharging.

Councils declaring"climate emergencies" are surely an open invitation for insurance companies to increase premiums in those areas.

There has always been 'risk-based pricing' in NZ together with a certain amount of cross-subsidisation on earthquake/volcanic risk but it can never remain static. The insurance market knows now and did not really know when EQC changed in the '90s that the next big Wellington event will likely (according to the latest research) put Petone under water not raise the ground. Additionally in the past the assessment of ground conditions (sub-soil) was generally made on a large general area as there was not sufficient scientific knowledge to make those assessments on a street by street basis plus knowledge of liquifaction potential was less than it is today. How things have changed today is that more recent research on the probability of an event and on the extent of damage that follows has enabled the insurers/reinsurers and their modellors to make predictions that are more likely to be accurate than they could be 20 or 30 years ago and if this means Wellington have to pay higher premiums than before so that they pay closer to their true share of the probabalistic risk then so be it. They should count themselves lucky that EQC does not also adopt a risk-based pricing model.