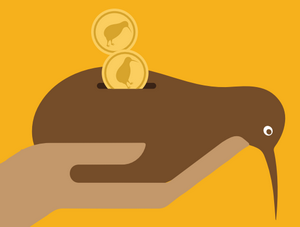 It seems unlikely New Zealand First’s goal of having a government-run KiwiSaver scheme will become a reality.

Yet Labour won’t commit to supporting it, while National says it’s “highly unlikely” the Bill will get its backing.

New Zealand already has a government-owned KiwiSaver provider - Kiwi Wealth. Like Kiwibank, it is a wholly owned subsidiary of Kiwi Group Holdings, which is owned by New Zealand Post, Guardians of the New Zealand Superannuation Fund and the Accident Compensation Corporation.

However Tabuteau’s KiwiFund Bill says the working group would advise on setting up a scheme based on principles such as:

Tabuteau can’t say a whole lot more about how exactly he envisages the scheme working, saying it would be up to the working group to nut out the details.

Commerce and Consumer Affairs Minister Kris Faafoi says: “The Bill and the Select Committee process will be a useful opportunity to discuss this and test if the market is providing value for money.

“Getting New Zealanders value for money from their KiwiSaver funds is an important goal.”

However Faafoi won’t comment on whether he believes there’s need for a government-owned scheme, given we already have one, and the push for greater fees transparency with providers soon being made to disclose fees in dollar terms in their annual statements.

Faafoi won’t say whether the Government would be willing to throw taxpayers' money towards setting up the scheme and funding it until it gains scale to sustain itself.

Treasury estimates a scheme would cost about $1 million to set up if it was managed by the Guardians of the Super Fund, and its front-end services were provided by either the Inland Revenue or Kiwibank.

And if it’s anything to go by, the newest and most cost-efficient KiwiSaver provider in the market, Simplicity, needs more than $300 million of funds under management to break-even.

Asked about whether he has any concerns about KiwiFund’s focus on local investment and low fees (most likely enabled through passive rather than active management) being an impediment to maximising returns, Faafoi doesn’t have any comment.

National’s Finance Spokesperson Steven Joyce wouldn’t go into these details either, but says: “We haven’t discussed the bill at Caucus yet but we would be highly unlikely to support setting up a further government-run KiwiSaver scheme.

“The KiwiSaver market on the whole works well, with a range of competitive providers offering products across the range of fee levels and risk appetites.

“If the Government is concerned about fee levels etc, they should make regulatory changes rather than set up another provider.”

When asked about his view on capping KiwiSaver fees last month, Faafoi said: “At this early stage, capping a whole lot of things is not necessarily the wisest thing to do. I’ve certainly heard concerns around KiwiSaver fees and I’ve asked officials to look into it.”

Documents released by the State Services Commission show the Green Party asked Treasury to do some analysis on a having a government-run KiwiSaver scheme during coalition talks in October.

Treasury found that if a public KiwiSaver scheme had a passive investment mandate, made average annual returns of 6.2%, and charged an annual fee of 0.30% of funds under management, a person who had consistently worked from age 18 to 65, received the average wage and hadn’t made any withdrawals, would accumulate 5.5% more in savings than someone who’d invested in a standard existing default fund.

Treasury admits there are a number of assumptions in its model, and it hasn’t assessed whether the rate of return it has used is a reasonable long-term average.

It also acknowledges Simplicity’s annual fee of 0.30% of funds under management, plus $30, is a reasonable benchmark when considering what a government-run scheme would charge.

Kiwisaver needs to be beefed up for sure. Making it universal is the next logical step. But the government should not be a provider and there is no need even for them to be offering subsidies. One improvement around providers is allow folk to have more than one provider. Balances are building up, but we are forced to have all the egg in one provider basket. Could be better.

The default schemes should have their fees capped. The govt is basically giving free money away to the banks right now.

Wait until there is another financial crash arrives and decimates peoples kiwi saver holdings.
Lets not forget that some of these schemes are operated by the same people who operate banks and doesn't everybody love to put the knife into them.
Shouldn't be made universal until some form of garauntee is offered.Why shoud people be forced to invest in something that can lose their money.

Or worse, as seen in other countries, where Politicians use compulsory super funds as piggy banks for every hare brained pork barrel political toady scheme. Imagine the Greens having access to our savings to build white elephant train sets?

Yes, I share that concern. The search for NZD denominated investments would be used to justify the purchase of all sorts of local garbage. I bet NZX would just love to have all that money bloating up our capital markets.

Yeah lets give the Govn more money to throw at any project a pollie wants. Anytime a pollie feels like they can even right the fund an IOU and "confiscate" its assets, no thanks.

If you look at Spain(?) much of the Council debt is held I think by the local pension funds and its questionable if it can ever be paid out on. US cities pension plans I think are in a similar insolvent state.

I am sure if there was large $s coming in NZ councils would love it if "we" were forced to invest it in their debt, no thanks.

Sure,
Yet I think the advantages of not borrowing foreign are not being factored.
Someone may be able to calculate the difference in meaningful numbers.
Besides, how liquid are some of the foreign bank investments in buildings, waste systems...Ill stop now...

That's one good thing about the current kiwisaver, it is out of the gubmints reach.. the worst they can do is reduce the incentives or tax breaks.

Totally agree. There will be I think a call at some point for kiwisaver accounts to be "investing" in NZ. Investing in places like council debt, or even riskier company debt for the "good of the NZ economy".

At which point I will go on a contributions holiday, and manually deposit enough to get the gubmints free money and not a cent more. Then direct my money to another investment of my choice.

Let's be fair on the recent governments, though. Even National didn't raid the NZ Super Fund for pet projects.

You are right. Suspending payments into the fund does not equal withdrawing from it.
https://www.nzsuperfund.co.nz/nz-super-fund-explained-purpose-and-manda…

Ngakonui Gold - I'd agree with you if the bulk of retirees and the economy could stand every retiree living off Govt Super solely. Fact's are that, although its one of the more generous supers in the world, Govt Super alone isn't going to make people happy in retirement, and over time its going to become less generous unless the Govt starts taxing you more (i.e. a compulsory super tax that you have no control over at all). Make it guaranteed ? You mean make the taxpayer guarantee it for other taxpayers, not the best logic.

So yes don't make it compulsory because many people can't handle the highs and lows of investments returns, whilst those that can will enjoy a more satisfying retirement - individual choice will be a disaster for many, probably most.

"kiwisaver holdings" however will not be uniquely exposed to losses as all pensions "swim in the same [sewer] water.

The next thing is why does a kiwisaver scheme need a guarantee and more importantly, who actually is the guarantor? I know one thing I would as a tax payer greatly object to be such a guarantor.

Why would dear old NZ be any worse than any other long term investment in any other first world economy.
As a young society it may do better than the arthritic attrition of non stop capitalism in the US and Europe.
But you can chase bitcoin if you wish.

Yes, that is a good thing

Danger will robinson.. lets overinflate our own equities market then just before I retire there is a hiccup and it gets revalued down 30%? Pass.. I think i like having my money spread all around the developed world so i'm not overly at risk from any one market having issues.

Let the investors decide this for themselves,

*the support of a government guarantee;

Nooo.. too much moral hazard.. may as well say gamble away folks, chase the highest returns you can and the govt will step in and rescue you if it all goes tits-up.. ie socialise the losses on to the next generation or two (who are already on the hook for your non-means tested super anyway..)

In favour of the general idea, but achieving that may not be so easy unless you want to kick the aussie banks out of kiwisaver altogether.

Nah, stay out of it. Imagine the moaning, letters-to-the-editors and the painful Jack Tame inquiries every time it the fund went back half a percent. Plonkers would then want top-ups at retirement as the government ruined their lavish retirement plans because it never produced the 30% return every year that they were expecting!

It seems the NZ Herald is unaware that National is no longer the government in this ‘make Kiwisaver Compulsory story’!
Reused story from 2016 perhaps. So much fake news - sad.
http://www.nzherald.co.nz/personal-finance/news/article.cfm?c_id=12&obj…

This being the Herald, it could be either incompetence or malice.