ANZ NZ again lavishes advertising spend on its ANZ brand, spending more than 4 times what it spent on the National Bank in 1st 6 months of year

ANZ NZ again lavishes advertising spend on its ANZ brand, spending more than 4 times what it spent on the National Bank in 1st 6 months of year 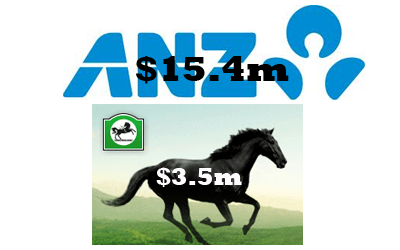 ANZ New Zealand has again led the way in advertising spending among the country's big banks and again splashed out significantly more money on its ANZ brand than on the National Bank.

And Nielsen AIS figures also showed the biggest slice of bank advertising spend for the full 2011 went on the ANZ brand. Money spent promoting the ANZ brand surged 108% year-on-year to NZ$30.342 million in 2011 and money spent advertising the National Bank plummeted 74% year-on-year to just NZ$4.292 million. Much ANZ advertising over the last year has been connected to its sponsorship of the Rugby World Cup. ANZ is also the "official partner" of the New Zealand Olympic and Commonwealth games teams, although ASB is the official bank of the New Zealand Olympic team.

Both ANZ Banking Group CEO Mike Smith and ANZ NZ CEO David Hisco have been open about reviewing the ongoing use of the National Bank brand over the last year or two. Currently ANZ and National Bank staff are being moved onto one IT platform, nine years after the ANZ group bought the National Bank from Britain's Lloyds TSB. Running behind schedule, the project effectively involves shutting down the ANZ IT platform and adopting the National Bank’s Systematics core banking system. It was originally due for completion by late 2011. ANZ's now targeting completion by the end of 2012 at a cost of at least NZ$221 million.

In 2010 ANZ renewed its rights to use the Lloyds black horse on a green and white background as the National Bank logo until the end of 2014. Any further renewal on use of the logo would be subject to negotiation with Lloyds.

Hisco told interest.co.nz in March the ANZ group was focused on completing its IT project and yet to decide whether to ditch the National Bank brand. However, he said 99% of customers don't really care about brands so long as they get good service. The National Bank consistently places ahead of ANZ in retail customer satisfaction surveys.

National bank branches these days are looking very tired and shabby, and many of their staff are now wearing ANZ branded clothing, so it is possibily just a matter of time before the NB brand is no more, and their NZ branches are rebranded..

I've just updated the story with this: In 2010 ANZ renewed its rights to use the Lloyds black horse on a green and white background as the National Bank logo until the end of 2014. Any further renewal on use of the logo would be subject to negotiation with Lloyds.

We are with the National Bank, & definitely won't go to ANZ.  Already we notice the difference with back-office functions becoming more inefficient.  We will probably go with the Cooperative Bank.

Can someone clarify exactly who is the Olympic bank .
ANZ are pumping themseleves as the Official Olympic bank.
ASB are working themselves into a right frency over being the official Bank of the NZ Olympic team.
Seems like a right marketing shemozzle.

ANZ seems to be the "official insurance partner".
Not sure why you'd want insurance from a bank though.

i wish all banks would stop sponsoring sport altogether and instesd put that money towards reducing fees or increasing deposit rates.

I think thats a bit random . Why increase deposit rates when theres no need. Keep rates low . Co-operative bank whaaat the ??? High Risk + Poor Performance and no value to clients.