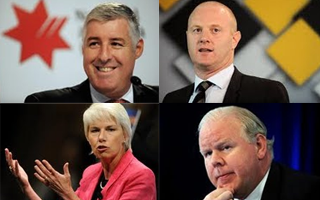 Some people would have you believe they exert more power over the New Zealand economy than anyone else.

They're the CEOs of the big four Australasian banks. None of them live here and they visit only rarely.

But the subsidiaries of the banks they lead - ANZ NZ, ASB, BNZ and Westpac NZ account for nearly 90% of the banking sector, or just over 70% of the financial system as a whole. So when they speak, it's worth listening.

Over the past week or so we've heard from all four; -  Ian Narev, the New Zealander who is CEO of ASB's parent Commonwealth Bank of Australia (CBA), Cameron Clyne, the former BNZ CEO who is now boss of its parent National Australia Bank (NAB), Westpac's South African-born Gail Kelly and ANZ's British-born Mike Smith. They spoke publicly as CBA issued its half-year financial results and the other three banks their first quarter trading updates.

Singing from the same hymn sheet

Unsurprisingly the volatile global economic picture, with the Eurozone sovereign debt crisis at its core, was a reoccuring theme. For Clyne the focus here is on how to extract NAB from its troublesome British banking operations where he noted Britain was in recession and the neighbouring Eurozone in a "prolonged" one. From the other three  CEOs - who don't have NAB's brick and mortar UK problems - there were some remarkably similar themes. At times it almost sounded like they were reading speeches written by the same person.

Nearly three-and-a-half years after the collapse of Lehman Brothers, Smith, Kelly and Narev were publicly saying what many have been for some time. That is; the global economy has entered a long period of weak growth. Nothing earth shattering in this view perhaps, but when you hear the bosses of banks -whose lifeblood has been lending money - talking about long-term anaemic credit growth, it's noteworthy. 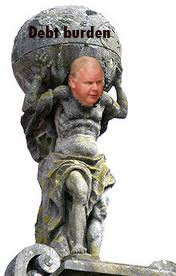 Here's Kelly: "We’re in a deleveraging world. One of the impacts of what’s occurring in Europe is even the best case scenario in Europe means we’re in for a decade of low growth." Read more from Kelly here.

Here's Smith: "I believe it’s clear we’re presently in the second and more protracted phase of the global financial crisis. This is really the work out phase where the world makes the painful adjustments that are necessary to deal with what is a massive debt burden." Read more from Smith here.

And here's Narev: "I have thought for some time that the line of thinking that once we get through this we’re going to return to the great halcyon world where credit growth is in multiples of nominal GDP, isn’t going to happen."

These are pretty sobering comments, in terms of what may be lying ahead for the thousands of staff working for these banks in New Zealand and their millions of customers. This is especially so when taking into account that two of the speakers' banks - ANZ and Westpac - have already cut about 1,400 jobs in Australia so far in 2012 and all four banks have engaged in an out-of-cycle hike to floating mortgage - or variable - rates, IE increasing mortgage rates despite the Reserve Bank of Australia leaving the Official Cash Rate unchanged at its most recent rate setting meeting.

Across the ditch, these moves have been greeted with the now predictable political and media ire, coming as they do, off the back of record combined annual profit from the big four last year of A$25 billion and solid looking starts to their new years.

Australian Prime Minister Julia Gillard advised unhappy bank customers to "walk down the road and get a better deal." And the Herald Sun newspaper lambasted Smith for taking selected ANZ staff on an A$1.75 million cruise with the headline: "ANZ slugs your mortgage, sacks 1000 workers - now it's time to party."

But across the fence from the Aussie bank bashers are the bank cheer leaders. One of them, analyst TS Lim of Bell Potter, asked Narev on a conference call for his opinion on the "latte sipping leftists" view that banks should be regulated like utilities. For the record a smiling Narev said in CBA's view banks aren't utilities.

In terms of the raw numbers CBA, the bellwether for the big four, said cash half-year net profit rose 7% and its return on equity (RoE) was 19.2% with ASB delivering a record half-year profit up 31% to NZ$372 million with RoE of 21.2%. Meanwhile, NAB's quarterly cash profit rose 8%, ANZ's quarterly profit climbed 4%, and even though Westpac's cash earnings fell fell 6%, they were still a very healthy A$1.5 billion for the December quarter.

NZ a bastion of tranquillity

Compared with what's going on across the ditch, the New Zealand banking scene looks like a bastion of tranquillity. Our bank bosses actually like our government. Westpac NZ CEO George Frazis went as far last year as praising Prime Minister John Key for being an ex-banker whose government is much more focused on growth and credit availability than Gillard's. And Reserve Bank Governor Alan Bollard refrains from publicly criticising the banks as Aussie regulators do from time to time.

But the question is how long can this tranquil scenario continue?

The answer is probably not long. Because with the Aussie parents of our big banks feeling under the pump, and they do with rising funding costs and growing regulatory pressures both from the Australian Prudential Regulation Authority and the global Basel III capital requirements, this will, before too long, trickle down to their New Zealand subsidiaries and those subsidiaries customers.

So what can we expect?

One key area to watch at the New Zealand subsidiaries is the dividends they pay their parents. ANZ NZ's latest general disclosure statement notes it's paying a NZ$550 million dividend in March, up from NZ$430 million a year ago.

Will there be job cuts and higher interest rates on loans?

The New Zealand banks are playing down the possibility of job cuts and ASB CEO Barbara Chapman threw down something of a gauntlet to her rivals last week when telling interest.co.nz  an out-of-cycle floating mortgage rate hike was "not on our horizon." Floating rates are key because although banks have been trimming their fixed-term mortgage rates, 61% of home loans by value are floating and a whopping 84%, or NZ$143.993 billion, are either floating or up for renewal during 2012. Floating mortgages are more profitable for the banks here than fixed mortgages, and a big shift from fixed to floating in the last two years has bolstered bank profits, giving them a cushion not available in Australia.

And there might even be some good news for savers. Firstly this is because the cost of wholesale borrowing is rising for the banks. BNZ CEO Andrew Thorburn recently told interest.co.nz this is costing 250 basis points above the bank bill rate versus about 170 basis points at the height of the global financial crisis.

Then there's the impending increase to the core funding ratio, which sets out that banks must secure at least 70% of their funding from retail deposits or wholesale sources such as bonds with durations of at least one year, to 75% from the start of 2013. Smith suggested ANZ NZ's margins are likely to stop rising because of competition for deposits, in part to meet the core funding ratio, hinting there's potential for a price war. (See all advertised term deposit rates for terms up to nine months here and see all advertised term deposit rates for one to five years here.)

As for staff, it's hard to see the big banks employing as many of them in the future. According to the most recent KPMG annual Financial Institutions Performance Survey, the big four combined have 23,532 staff and 836 branches in New Zealand. With Generation Y and other subsequent digital native generations, I can't see the need for so many branches and hence at least some of the staff employed in them must have precarious futures.

Kelly touched on this predicting fewer, smaller branches in the future, that would be staffed differently with higher skilled staff and less tellers. There's also the ever present threat of offshoring. This was highlighted in Brisbane in January when Westpac technology and back office staff complained after they were sacked and then asked to retrain their Indian replacements.

With global interest rates at such low levels there is only one direction that can go. I wouldn't trust this lot with my money. Look for big trends that will continue growing regardless of the money printing and reckless borrowing that's going on.

Hi, what's the general opinion about fixed term loan rates out there? Are we thinking 3-5 year fixed rates will go down, up or stay the same? If up or down, by how much? Kiwibank seems to have ended it's 5.99 rate offer - is anyone predicting further specials? Thanks

Here's an idea: The government should legislate that all banks must be floated on the local market. Give all those "mum and dad" investors something to get nice juicy dividends from :-)

Simpler solution is for the NZ government to charge each bank wishing to hang its shingle up, and do the business, an annual licence fee of $500 million. That-a-way the whole of society benefits.

These outfits are utilities and should be regulated as such.  Profit at that level per staff member really can't be justified out of cosy monoplies.  (Quadopoly more like  - but maybe thats a new word).