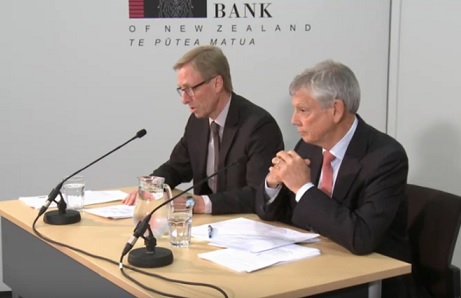 It is an adroit move that neatly sidesteps potential complications caused by the current Governor Graeme Wheeler's term expiring just three days after the September 23 election.

The way is now clear for the Reserve Bank board to take out a clean piece of paper after the election and start scribbling down potential names for a new Governor. The preferred choice can then be presented to the incoming Finance Minister for their approval. And then later, the Minister can sit down with the new appointee and nut out a new Policy Targets Agreement.

Less satisfactory is the around 14-month period the RBNZ faces being headed up by people who know they won't be there for long. In my view there will be a risk of severe inertia within the central bank, notwithstanding that the day-to-day running will be in capable hands. But new initiatives come from people new to a job and people who know they are going to be there for a while - not generally from those marking time, no matter how professionally they might go about that.

Whether by design or accident, I think this hiatus at the bank does give this Government, followed by whoever forms the next Government, some time to have a good look at the RBNZ, how it's structured, how it operates and what form the PTA takes.

The RBNZ's governing legislation is the Reserve Bank of New Zealand Act 1989. There's a bit of a clue to a problem in that title. Yes, the date. Quite a long time ago. The Act has done us proud, I think, but a fairly substantial review and overhaul is now overdue.

And then there's the interwoven issue of the Policy Targets Agreement.

The Reserve Bank Act requires that price stability be defined in a specific and public contract, negotiated between the government and the Reserve Bank. This is called the Policy Targets Agreement (PTA). The current PTA, signed in September 2012, defines price stability as annual increases in the Consumers Price Index (CPI) of between 1 and 3 percent on average over the medium term, with a focus on keeping future average inflation near the 2 percent target midpoint.

That's deliciously uncomplicated. But does pure inflation targeting as the key instrument of monetary policy still 'work' in the way it worked so well in the past? It is certainly an issue that should be getting high-level consideration. Of course, if the Government changes late this year, Labour's previously indicated it wants the PTA in future to include employment.

The way in which RBNZ interest rate decisions are made is another point of contention.

Officially, movements of the Official Cash Rate are made by the Governor. Wheeler has attempted to communicate (probably without real success) the idea that he makes the decisions very much collaboratively as part of a governing committee.

I think, however, a lot of people would welcome an official move to something more like the US Federal Reserve's committee structure, making it very publicly clear that these decisions are not being made by one person.

The other thing that I very much believe needs clarifying is the Reserve Bank's twin functions of on the one hand monetary policy and the other Financial Stability. The latter role has become much more significant since the 2008 Global Financial crisis.

Aside from the confusion, the two roles have often seemed to get in each other's way more recently. For example, does the RBNZ cut interest rates (monetary policy) to get the value of the dollar down, while at the same time risking the housing market (financial stability) taking off again?

It's a conflict of interest that I think would benefit from at least some effort at a more formal demarcation of the roles. I know the RBNZ would probably strongly resist any formal, structural separation of its two roles - such as by creation of a new body to manage financial stability. We are however, well past the time when the issue should at least be properly examined.

So, those are just a few things I think the Government or Governments could be looking at over the next year. It's an ideal opportunity.

And then just finally - on the next fulltime Governor. We need someone comfortable in public speaking and who can relate easily on the general public's level. Years ago I thought Don Brash was always pretty good at that. The Governor has to be visible and accessible and able to communicate confidence.

I recall very, very many years ago attending what I might loosely term a social function, with several colleagues from the old Evening Post newspaper in Wellington. The slightly full-of-ourselves financial journalists gathered in one end of the room talking pretentiously and loudly about the economy. Alcohol was being consumed.

I became aware of an interloper; a burly young man in black T-shirt and jeans, heavy duty footwear (possibly DMs), looking like he had just come out of the front row of a scrum.

The young man silently observed our (ill-informed) analysis of the economy while standing at the edge of our group and then, to my surprise, began to proffer a view. Eloquently and without pretension he proceeded to give a dissertation that, without any intent on his part to be unkind, completely wiped the floor with our limp arguments.

The guy was as sharp as a tack and what he didn't know about economics hadn't been written. I had just met the now chief executive of the NZ Super Fund. For what it's worth, I think Adrian Orr would be a great choice as Governor.

You sense from the planned hiatus between Wheeler and the next man/woman that even the Nats probably realise the objectives and separately the tools of the RBNZ need serious review. It is easier for them to review these matters post election than do so publicly before.
President Trump's election has highlighted that trade and to some extent therefore currencies will be at the forefront of international negotiation over the next few years. He also is very much focussed on employment, as Labour advocates the RBNZ should be here (along with inflation and financial stability).
To me in monetary terms employment is something of a proxy for the current account, and I would prefer something close to balance being achieved in that, so that we are not perpetually selling assets to fund our lifestyle. Achieving that would need a lower dollar, and probably printed money to achieve that- a separate tool than the current one tool only system.
However I accept that any such discussion should include the topic of what NZ Inc should base its business model on. For all of the National government time our business model simplistically seems to have been selling to foreigners some agricultural goods (where a lower dollar works better), tourism (which seems somewhat dollar indifferent) and property (where a high dollar almost certainly gets the biggest bang for the buck). Education I'll leave out as it is probably selling immigration rather than education; and may have a much higher cost than meets the eye, when infrastructure is included. In return we buy cars, overseas holidays, electronics, clothing, drugs (legal and illegal) and other knick knacks.
It is the selling of property and hard assets that needs the most discussion. The Nats have been promoting this model aggressively but stealthily (or possibly accidentally). Do we want to keep selling the country off for short term lifestyle choices? Do we understand the infrastructure shortfall as well as loss of wealth implicit in that choice? Maybe so, but it should be a more open discussion. How you run the RBNZ is central to the outcome.

Also, with increased globalisation, one country, NZ, is restrained from increasing wages to boost inflation or internal demand, so perhaps that's why the NZ govt resorts to selling hard assets, infrastructure & export education for a temporary short term boost.

Yes, I very much agree that balancing the current account is partly a responsibility of the Reserve Bank and should be formally acknowledged as such. Everything you say is true, the only thing I would add is that we balance the current account by gently encouraging exports and saving on the one hand, and gently discouraging imports, foreign capital and borrowing on the other.

We really ought to stop shooting ourselves in the foot.

So other than keeping an eye on M3 money supply , watching asset prices dont explode and curbing Inflation what other roles could they possibly have ?

Common that's an over simplification of the RB's role

Great article David. Yes we need a Governor to tell it like Adrian Orr can BUT he is making a great job with the Super Fund. Yes perhaps we need a committee ( Not another Committee, tongue in cheek) To run the financial oversight of the country Encompassing not only the RB's role but also the FMA,IRD etc

What surprises me is the RBNZ's resolute refusal to acknowledge that the exchange rate does have an impact on incomes,business activity and even overall prosperity including the tax take and Government balanced books. Perhaps Wheeler hasn't noticed the improvement in the UK's economy since the pound depreciated to say nothing of the positive mood of the country despite the whinges of the remoaners. There was plenty of scope to reduce the OCR aggressively, burn the speculators, create import inflation and substitution whilst making exports more competitive. Great that Wheeler has resigned but not holding my breath his replacement will actually perform any better for the benefit of NZ.