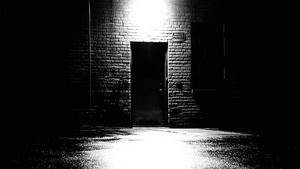 Peer-to-peer (P2P) lending, according to Investopedia, is a method of debt financing that enables individuals to borrow and lend money without the use of an official financial institution as an intermediary, thus removing the middleman from the process.

That certainly fits with the concept of P2P lending popularised in the likes of the UK and US post the Global Financial Crisis and envisaged by the New Zealand government when it rubberstamped regulations enabling licensed P2P lending in 2014. Something of a revolution was in the air.

But the Financial Markets Authority's first statistical report on P2P lending, issued this week, highlights just how little actual P2P lending there has been in NZ to date.

The useful and informative FMA report details that there are 20,744 investors registered with licensed P2P services. At 207,230, there are about 10 times as many borrowers registered with P2P services. The volume of investors, or savers, versus borrowers sounds unbalanced and it is. But the bulk of money being lent through P2P platforms is coming from banks and institutional, or wholesale, investors.

Far and away the biggest NZ P2P lender is Harmoney, the first to launch, going live in September 2014. According to its website, to date Harmoney has matched borrowers and lenders for loans totalling $651 million. According to the FMA report, as of June 30 the total value of Harmoney loans outstanding was just under $239 million. The five other active P2P lenders had a shade under $50 million worth of outstanding loans between them.

So that's about $289 million worth of lending across the sector. Just three years in it's obviously still very early days for P2P lending in NZ. But to give the volume of lending arranged through these online platforms some context, Reserve Bank sector credit figures show that, as of September 30, there were $423 billion worth of loans outstanding in NZ across the housing, consumer, business and agriculture sectors. Reserve Bank figures also show gross deposits held by NZ banks of $316.213 billion at September 30, with $162.922 billion of these household deposits.

Thus P2P to date is clearly just a drop in the borrowing and lending ocean.

Harmoney's plans always envisaged securing a significant volume of funding from institutional investors and banks. The company's founder and co-CEO Neil Roberts was always open about this. And this is the way it has panned out. Harmoney says three quarters of funding for its loans comes from institutional, or wholesale, investors, with just a quarter from ma & pa retail investors.

$128 mln of lending from two banks

Harmoney has Heartland Bank as a 12.9% shareholder. Heartland also lends money through Harmoney, and as of June 30 had lent $78 million through the P2P lender. A Heartland spokeswoman says this has continued to grow since, and Heartland’s lending through Harmoney represents around one-third of the Harmoney loan book.

In its annual report in June TSB disclosed it had lent $50 million through Harmoney to that point. So as of June 30, two NZ banks had lent a combined $128 million through the country's leading P2P lender.

Other institutional lenders to utilise Harmoney include US firm Blue Elephant Capital Management, which revealed plans to lend US$50 million through the Kiwi P2P lender in 2014, and the UK's P2P Global Investments PLC, which in 2015 Harmoney said it had secured $200 million of funding from as the P2P lender eyed the Aussie market.

This shows that banks and institutional investors are dominating lending through Harmoney, which says the average lender is getting an annualised realised return of about 13% before tax. Arguably Harmoney is providing a broker service for banks and wholesale investors.

There are now a total of eight P2P lenders licensed by the FMA. Notably among them Squirrel Money's managing director John Bolton has pledged that his firm won't seek funding from banks or institutional investors, and will be a pure P2P play.

In September FMA CEO Rob Everett said he was both disappointed there's only one P2P lender with scale to date, and that there has been little lending to small and medium sized businesses (SMEs) through P2P lenders. The FMA's report shows $259.9 million loaned to individuals with debt consolidation dominant, and just $29.5 million loaned to businesses.

Everett said the designers of NZ's P2P regime would've wanted to see more funding helping SMEs "innovate, grow and employ more people" by now. He suggested perhaps SME owners don't want to expose their businesses to the scrutiny of fund raising through a public P2P platform, or don't feel it's a viable way for them to borrow at this stage. However, when interest rates go up SME owners may search beyond banks for funding, Everett suggested. If it really wants to help SMEs grow through P2P loans perhaps the NZ Government could do what its British counterpart did and lend money itself to SMEs via P2P platforms?

Of course with a new investment class such as P2P lending, more retail investors should be enticed in over time, assuming loan default rates don't get too high. (As of June 30, $29 million of loans were in arrears or had been written off). But it would be nice if those ma and pa investors prepared to take more risk for the higher interest rates offered by P2P lenders compared to bank deposits, were able to battle past the banks and fund managers for a decent slice of the action.

Perhaps more work needs to be done by P2P lenders themselves, and the FMA, to educate retail investors and SME owners on the opportunities - and risks - offered by P2P lending. And to make sure banks and fund managers don't continuously gobble up the best loans. Otherwise the danger is that P2P lending is just backdoor banking.

*The three tables below come from the FMA report.

Harmoney tracks the funding split of loans arranged via its website in the chart below. The company says on average 25% of loans are funded by retail investors and 75% by wholesale, or institutional investors. (The blue is wholesale money, the orange retail money). 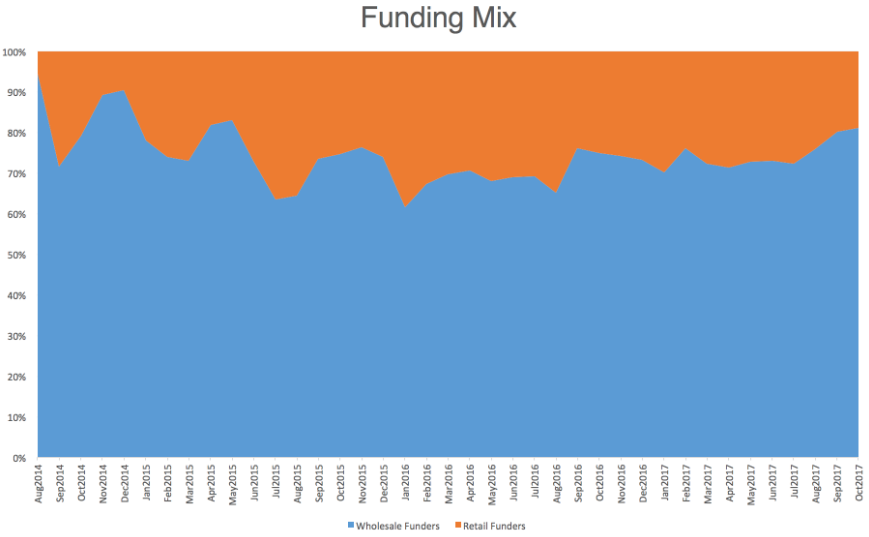 The graph below shows a breakdown of Harmoney's loan portfolio by reason for borrowing. Debt consolidation is far and away the biggest use of loans arranged through Harmoney. However, the company says in some cases these loans will also include a portion of funding for another purpose. This article was first published in our email for paying subscribers early on Wednesday morning. See here for more details and how to subscribe.

Good to see that Harmoney being mainly bank funded is finally getting some attention. They trade under the P2P banner and advertise as such. If only 25% of their funding is actual real P2P then are they really P2P? Isn't it a bit like selling milk that's only 25% milk? Or, perhaps, like saying you are organic when actually you only use 25% organic ingredients? Will this get them into trouble one day when the honeymoon period expires?

I think Harmoney seems like a good thing, but the 75% bank funding sits uneasily with their marketing. Is the low % of real P2P because the banks are crowding out retail investors or for other reasons?

I think Harmoney seems like a good thing, but the 75% bank funding sits uneasily with their marketing. Is the low % of real P2P because the banks are crowding out retail investors or for other reasons?

I think you're possibly right. I was in Harmoney from the start and the quality of the lender composition (fewer loans, larger amounts) has deteriorated since the banks started investing heavily. I do not invest any more as I feel that the loans fall outside my risk tolerance, particularly on loan amount.For ex, when I see loan amounts of 70K being sought at P2P interest rates, I steer well clear.

The reason p2p hasn’t taken off with retail investors is because too many were burnt, prior to, and after the gfc.

In addition most investors see interest income as “passive”, so don’t necessarily subscribe to managing a portfolio actively.

The banks need secondary lenders to provide liquidity to the market, but don’t want, or have the ability to manage directly. Providing funding lines, and more importantly collecting fee revenue off the tranascactional banking is very profitable.

"Would you want to be the individual "beneficiary" of one of those stats?"

That's all part of the risk of being a P2P lender.

But it's not P2P really, is it! That's the point of this article. The Commercial Lenders will pick off the 'good stuff' first ( that's their job - being a Bank!) and what's left is, well, the less than good stuff that amateur lenders can have a throw of the dice over.....The Risk gets concentrated in the amateur section...

You're right, but it's still a P2P platform.....where the hoi polloi get to pick over the scraps.

What other platform would you recommend? I'm looking for long term (20+ years) investing.

If there was an answer to that question, there'd only be ONE platform, and everyone would be on it!

No one knows what The Future holds, especially 20 years ( look back at 1997, and see what investment options there were then. DotCom was 'it' and it was...now. But in 2002, it certainly wasn't the place to be!). Every investment alternative is priced to perfection, today. Every market price is an even balance between those who think 'it goes up from here' and those that think the opposite. That's why The Price is where it is.....
And 50% of the market players will be right and 50% wrong. The 'secret' is to see when you're Wrong early enough and have the courage to 'get out' and wise enough to 'hold on' longer when things go as hoped. Neither of those 'secrets' is hidden, and neither is easy to do!

Most C2C systems start as a genuine consumer to consumer marketplaces but then degenerate into a veiled platform for the larger companies to exploit the system and to look like consumer/sellers, e.g. eBay, Trademe

That's a really good point, that I for one hadn't really considered. I wonder if this is a universal tendency? I suspect it may be.

The point with peer-to-peer lending though, as outlined in this article, is that the consumer to consumer side has not really got going yet.

Indeed, and it probably never will if the banks indeed cherry-picking all the good loans and leaving dross for the retail investors.

Interesting article. I have been an investor with Harmoney since June 2015 and have raised the issue of the wholesale lenders being given priority,more than once. It has been v ery frustrating at times.

However,as I have said previously,my experience overall,has been very positive. As of now,the main figures are as follows;
456 loans,of which 80% are A grade and 20% B grade.of these,208 have been paid-off.
10.27% RAR(realised annual return).
No loans have been written off. I normally invest $75(3 units) in A grade loans and $50 in B grade.

This forms a very small percentage of my portfolio,but so far,it has been successful and I am happy to continue with it.

Is it possible that the banks are just using these P2P lenders as puppets to circumvent Reserve Bank capital requirements or generate income through non CCCFA governed lending?