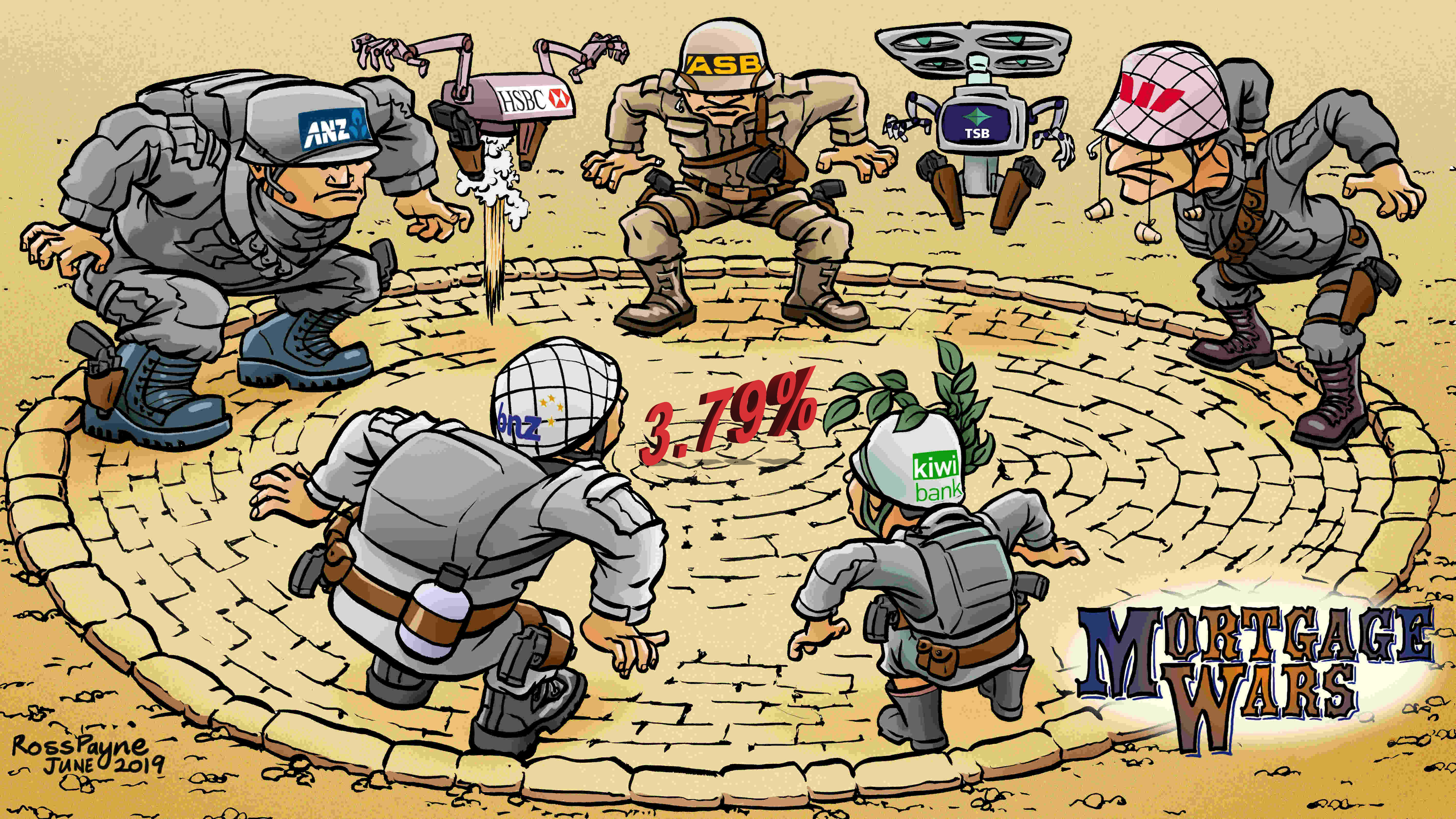 Not to let BNZ get ahead of them, Westpac has also now adopted 3.79% as their 2 year 'special' fixed home loan rate.

That matches BNZ (and TSB who have a price-match policy still in place).

It won't be surprising if other majors go there as well now.

Update: And now, ANZ has moved quickly to match its rivals. (ANZ is also cutting most term deposit rates.)

And that may mean some challenger banks will feel the need to dip even lower.

Don't forget we are still at least six, probably eight weeks away from the Spring real estate selling season, something that usually brings sharpened pencils by banks.

In the past four weeks, wholesale swap rates have not fallen - in fact we have recorded a +4 bps rise. But this has not stopped BNZ and Westpac from cutting -6 bps from their current 2 year fixed mortgage rate.

The Westpac change is effective on Wednesday, July 24, 2019.

Competition really is heating up .. will they wheel out Mr Stephens for 7% upswing in house prices article tomorrow?

Could this also be a sign that we will see an OCR cut in August? C31 data will tell us soon enough.

Hey Joe.. an year ago we had seen that 60% of NZ mortgages are on 8% people.. has that changed now? I guess it must be more distributed than that.. Mr Orr had hinted something like that during his initial talks as governor
Thanks

Well only about 40% of adults own property, so that means that 60% of NZ mortgages are on 20% of property owners. That number makes a bit more sense now.

The market has already priced in the OCR drop into wholesale rates. All but a done deal. Of course, Orr. So, who knows.

Well done NZD! I believe your mortgage is for your own home, if that's the case you can talk to the bank to keep your P & I payments the same as before. You will be amazed how much sooner you will repay your mortgage in full and how much interest you will save ($thousands)

Considered doing that, but we have a few little projects to do around the house first. I went 50% 1 year and 50% 2 year so when the 1 year portion is up I'll look at refixing at a shorter loan term.

Congrats. Buy another one now.

No they won't (unless you mean TD rates)

What do you mean slack in the term depo market? TD rates still >3 when, by rights, should be low 2's

Got any evidence of this? I've got 50c that says you haven't got this rate or anywhere near it.

perhaps avail yourself of the RBNZ data (s-31 & s-40). Total deposits grew $5b in last 3 months, while lending grew $5.8b.. not sure that is excess funding. Just looking at housing lending up $4.4b while household deposits (like Term deposits) up $3.4b. A gap again

NZ are not big savers... banks chase deposits in order to offset lending, where the bulk of money is made, not chase lending to do something with their deposits. It's precisely because there is competition for what lending there is, that rates have downwards pressure

Are you kidding me mate.

I've been to them in the last week for a small loan, 1/4 mil with 80% equity in my property portfolio. Best offer 3.78% with for 1 or 2 yrs with a small cash back incentive. So not seeing what you are saying at all.

Yeah right. I don't think it gets any harder than, "Improve your offer or I'm going with bank X".

Who is arguing? I am just offering first hand experience, rather than your hearsay.

The topic was 3.25 % or even sub 3% mortgage rates. So far you haven't told us which bank is dishing those out, or any details?

Sorry, as the others call out here, you're dreaming. All the main banks have 3.xx% term deposit rates. Not a single one of them will do a residential loan for 3.25%, let alone sub 3%. Perhaps you were misreading whatever loan doc you looked at.

Yep, that's the way I see it, also my experience within the last week. Happy to be corrected and be provided with a contact at one of the banks who can approve 3.25% loan for me. I will hold my breath and await the details.

Do some research on net profit margins guys, it doesn’t bother me if you want to pay banks hand over fist. Be my guest. Mrs to the point leads the herd in terms of being financially savvy, paying top dollar on a carded rate when interest rates are the softest in history, well done, round of applause.

Nobody’s going to come and hand you a 3.25% loan. Nobody. Why would they? You’ll just accept 4% at the drop of a hat on your loan anyway.

If only someone cleaver like you would teach me the secret handshake. Woe is me, whatever shall I do?
Why have you deleted all your silly comments?

How about you do research on net profit margins. You're telling us that a bank (in your words before you deleted them "all the main banks are offering 3.25% and some under 3%" on a home loan and also 3.25% on a term deposit? Loans which have origination and distribution costs, capital costs, etc etc.

The fact all your comments have been deleted speaks volumes.

But, but, but, international funding pressure :-)

It would be nice to see a head line - Competition heats up in business lending sector, SME's set to benefit - said no bank ever.