HSBC trims its one year home loan rate to just 2.09% even as wholesale swap rates start moving up at the short end. It raised all rates for two years and longer

HSBC trims its one year home loan rate to just 2.09% even as wholesale swap rates start moving up at the short end. It raised all rates for two years and longer 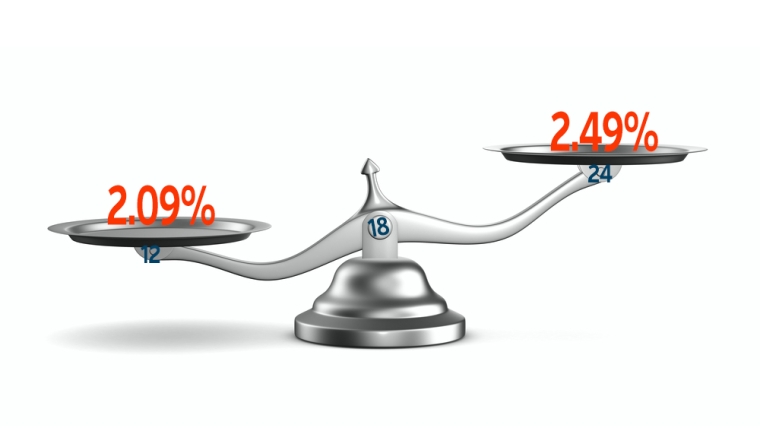 HSBC is the latest bank to change its fixed home loan rates, and they have steepened their rate curve pivoting on the 18 month rate.

All their two year and longer fixed rates have risen by increasing amounts.

After these shifts, only China Construction Bank has a five year rate below 3%.

This overall rate pivot by banks in the mortgage market is less understandable when you look at wholesale swap rates. That is because since June 16, 2021*, one year swap rates have risen from 0.36% to 0.50%, a +14 bps rise in just two weeks. The two year wholesale swap rate is up from 0.52% to 0.79% and a +27 bps rise in the same two weeks. At some point these background money costs will push home loan rates higher at the short end too. (Five year swap rates ended June at the same level they started the month).

They will if banks don't take up the RBNZ's Funding for Lending programme. They can have that money at the OCR rate, currently 0.25%. But it is a floating rate, and some banks are expecting the OCR to rise, perhaps as early as November 2021 and less than 18 weeks away. However, the most the OCR is likely to rise is +25 bps which would take the FLP money then to 0.50% - and still lower than the current one or two year swap rates.

The opportunities to lock in especially low five-year fixed rates may have faded somewhat, but the current offers are still historically low, so probably still deserve attention if you are the view that rates can only go up over the next few years.

* The US Federal Reserve published a higher dot plat on June 17, causing a global rise in short-term wholesale funding rates.

These rates are absolutely attractive and I think any long term upward adjustments will be minor in the long run.

Have you even run the numbers how much more people will be paying if rates get to 5-7% which is what banks are using for their stress tests?
We are talking about more than a thousand dollars a month on a mortgage of 1M at 30years going from the current 3% to 5%.
Even mortgage brokers are recommending fixing longer terms these days, people could get into real trouble listening to your advice.

Yeah, that's what I've found on interest website, there are people giving awful advice. I don't know whether they intentionally do it because of their own agendas or they just don't know what is happening. People make decisions based on these "advice" can seriously get themselves into trouble.

Some people are just toxic.

The world according to CWBW:

Thats a huge IF. And a long way away, rates won't get to 5% in a couple of years, maybe in 5 years, but by then wage inflation should have made the payments nice and manageable for most.

People could really regret listening to your advice (or call it your agenda since you'll deny it) when they discover they've been paying rent for years when they could be paying off their own home while interest rates are at record lows.

Sorry but this is nonsense, are you saying wage growth is going to compensate for a 2% interest increase? Either you are dreaming or looks like you don't understand how interest is applied, we are talking about 30y mortgages, not 10 years as they used to be 30 years ago. Not giving advice unlike your mate above, just saying everyone should do the numbers and not just take into account an attractive rate which next year will be gone, in contrast to splashing senseless comments for the sake of FOMO.

lol, called it. The same old not giving advice bullshit when you are doing no different than the previous poster.
And I've seen the way you do numbers.. I wouldn't trust you to divvy up the bill at a restaurant.

Mortgages for 10 years 30 years ago. My god do you come up with some bullshit. 25 year mortgages were the most common back in the 80s, and now we've moved to 30y mortgages. Btw, just refixed after buying in early 2020, currently scheduled for repayment in 13.5 years. ;)

And I see you once again have the crystal ball out (but will again deny it), and know that rates will be up in a year... maybe, but 0.25 or 0.5% isn't going to crush anybody.

Once again ad-hominem with no basis. The last resort when you run out of arguments. Congratulations.

Lol, your posting history is the basis.
Isn't it strange how your posts are never giving advice, but anybody who posts opposed to your views is..
Look at the OPs post that you slated as advice.. there is no advice in it, just an opinion. So either your posts can also be taken for "advice" or you need to stop trotting out your hypocritical BS.

You really need some help with anger management, people will not always support your views but that doesn´t justify such poisonous and intolerant behaviour.

Oh dear, such a fragile princess when called out on your hypocrisy. And now you are resorting to ad-hom.

I see you also edited your comment further up the chain..

Loving it. Differences in opinion makes us a market.

Just those that sell themselves.

Yes this is just a move to draw in every last possible punter and lock you into a mortgage before the rates start to rise. I would be anticipating rates of 5 or 6% by the time you come off your cheap credit hit. Sure the banks are stress testing at these higher rates but it might be time to get out the pen and paper to see if you can actually survive if rates increase. The banks don't care if you have to live on baked beans on toast as long as you pay the mortgage, can you live with that ?

Not without wage inflation anyway.

Yep, Personally wouldn't complain about another 10% raise next year. :)

I've just resigned a new contract, circa 13% more than my last signed in 2020. Employment market is hot hot right now

ANZ throughout their quarterly economic forecasts in 2013 and 2014 were also providing the same fodder for a much higher OCR path , and although the RBNZ did eventually raise the OCR, the RBNZ was much quicker to cut the OCR below the level prior .

I wouldn't believe a word of it. The key one year rates are still heading down. The banks are trying to corral the common customer into higher rates at longer terms. Don't entertain their sideshows. The global economy is still facing significant shocks ahead.

Yeah. The people the banks get their money from haven't shown any sign they think rates will rise.

What will happen to the $$ with rising interest rates? Export sector get yet another kick in the balls?

Maybe time to just float at a discounted rate of 3.5% and stop worrying about choosing which term or fixed rate.
Floating was supposed to reward the borrower for taking a bit more risk with shifting rates, but benefiting from the dips.
Keeps you away from break fees or and avoids sudden cuts that you can’t benefit from.

The flexibility is pretty expensive, at ~50% higher interest cost compared with a 1 year fix.