ANZ offers 3% pa for a three year term deposit term, the first time in this cycle a 3% offer for three years has appeared. But banks are raising term deposit rates slower than mortgage rates, and the difference is the widest on record

Personal Finance / news
ANZ offers 3% pa for a three year term deposit term, the first time in this cycle a 3% offer for three years has appeared. But banks are raising term deposit rates slower than mortgage rates, and the difference is the widest on record 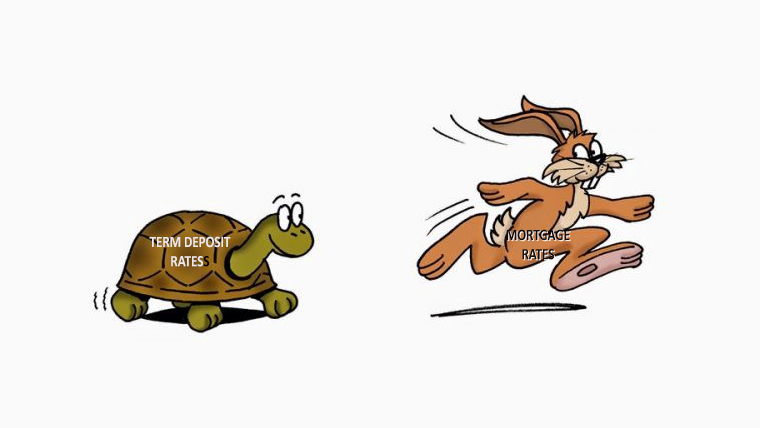 ANZ has raised term deposit rates just a day after raising mortgage rates in their latest round.

A feature of their change is that they are now offering 3.00% pa for fixed terms of 3, 4 and 5 years. That 3% for three years is the first time in this cycle that any bank has a rate that high for that term. Their main rivals only have a 3% offer for five years.

The highest rate offer for any term to four months is from Heartland Bank at 1.25% pa. They also have the highest offer for terms 5/6/7 months at 1.65% at six months.

For a one year term, the highest current offer is from ICBC at 2.05%.

Rising term deposit rates are being more than matched with rising mortgage rates.

Savers have been avoiding term deposits, and let their balances atrophy over the past 26 months. But they haven't stopped saving, they have just held these funds in at-call transaction accounts.

Meanwhile, all other household bank balances have risen over the same time by +$43 bln to $126 bln.

Even though today's term deposit rate increases are 'substantial' from a bank's point of view and are up +10 to +40 bps, it seems very unlikely that the resulting offers are still anything near enough to entice more savers to fix their holding in a term deposit in the terms they usually want.

But a growing deposit base does allow a bank to grow lending. But it gets fierce if their deposit base starts to fall - not only can't they grow their lending, they might have to shrink it. This is a special risk for banks that don't wholesale fund much, and that applies to most New Zealand-owned challenger banks. An aggressive term deposit marketing push by big banks might have an outsized consequential impact on challenger banks.

With inflation running at 4.9%, savers do have a problem. Leaving funds at a zero return will leave them in a much worse position after inflation, than getting some return to mitigate some of the inflation problem. But that return will have to be after tax and after inflation - and negative. It will just be less negative in a term deposit account.

One easy way to work out how much extra you can earn by switching is to use our full function deposit calculator. We have included it at the foot of this article. That will not only give you an after-tax result, you can tweak it for the added benefits of Term PIEs as well. It is better you have that extra interest than the bank.

I guess if interest rates rise, it might reverse the cycle of money moving out of TDs and into property. Probably not something banks would want at this time.

Woohoo, a -2% real interest rate, and inflation is more than likely to increase. Why would anyone with half a brain take these offers?

Because it is it is the least worst option

Because they're too nervous to get into BTC? Anti-bitcoiners.

Because they're too nervous to get into BTC? Anti-bitcoiners.

You can earn 8% on stablecoins. Don't have to buy BTC. Kevin O'Leary is doing it.

Because putting the capital into over valued assets is a risk and some will want to wait and see what inflation does.

Have no problem with these rates and they are still going up. TD comes out in Feb 2022 so expecting 2% for 6 months special by then. Clearly I have no idea about investing my money but somehow ended up with a few hundred thousand in the bank, go figure.

I'd be interested to see a graph combining 1 year mortgage rates, swap rates and term deposit rates to see how the three have moved and gaps changed over the last few years

Don't save the money. It's useless. Just buy houses. That's the only way to be a millionaire in NZ. Just have a look at politicians portfolios. All of them have money in the houses. They will not let it go down. They own you guys, the poor litte kiwi public. So just buy houses from each other and get the house market to new highs. Do it quick. I want to make my millions

Join TOP (if you haven't already).

Ranting on here is ok for the odd vent, but if you want real change, then get political.

Organise a rent strike (show there is a risk in housing). Lots can be done.....

"If you want real change, join a party that can't communicate its policies and self-destructs every few years in time for the election"?

Oh...like National at the moment?

TOP's tax and immigration policy's are a bit revolutionary compared to the rest, but they by far make the most sense for anyone working in this country under the age of 35. And anyone else not stupidly leveraged on property.  Promote actually working (less tax), and stop favouring debt speculation (universal land tax). Almost sounds too simple when put like that don't you think?

..or stay with Nat and Lab who both have had their chance ...and did what?

If you want change you won' get it from a main party.

How many more election cycles of Nat/Lab do you need before the penny drops?

Last month UDC offered 0.9%pa over 36 months on Kubota machinery (and possibly other brands). I snapped up a mini excavator, at that rate why bother with banks? I could have paid cash, but it works out at less than $800 in fees and interest, and the way things are going it won't be long until that cash will make more just sitting in a call account, let alone a TD.

No wonder the country is in hock up to its eyeballs right now. I had to talk my wife down from ticking up a ute as well.

UDC isn't a charity. That 0.9% "rate" would have been done in partnership with Kubota. Kubota would have capitalised most of the commercial interest into the purchase price, and paid that to UDC. I am guessing here, but the "0.9% you paid would just have been UDC's fee. It's an old promotional tool, usually seen in Harvey Norman's "interest free" deals - usually done with Latitude or Finance Now, or the like. The hidden interest isn't any less than normal, its just in the price you pay for the product you buy.

That's true. The cash price for the tractor I bought last year was 10% cheaper than the finance price at 0% over 2 years. Thats hard to figure? LOL.

Well aware of that, yes, perhaps I need to wedge my tongue further into my cheek next time for greater effect. I did buy a digger though...

You miss the point. Banks didn't take the risk in the first place. They hedged it via the swap market. The won't mind you staying with your existing rate but they have no need to pay you to cancel it. You can of course, for little but the admin fee for doing so when the market is rising. Then when you sign up to a higher rate now, they won't take the risk on that either. They will hedge it too via the same moneymarkets. Any financial institution that doesn't hedge, risks insolvency. They know they can't foretell the future and they would be grossly negligent to hold unhedged positions. None of them do that.

You should ask them Rex.

3% is still too low for a term deposit. Have just a few months' patience and this very same rate will be close to 4%.

The banks are ripping us off big profits

Looks like the Dutch bank is the best of the bunch while ASB is the worst.