Term deposit rates are moving up, following mortgage rates, and wholesale financial pressures. But there's no evidence the smallness of the recent increases are out of line with how they have always moved

Personal Finance / analysis
Term deposit rates are moving up, following mortgage rates, and wholesale financial pressures. But there's no evidence the smallness of the recent increases are out of line with how they have always moved 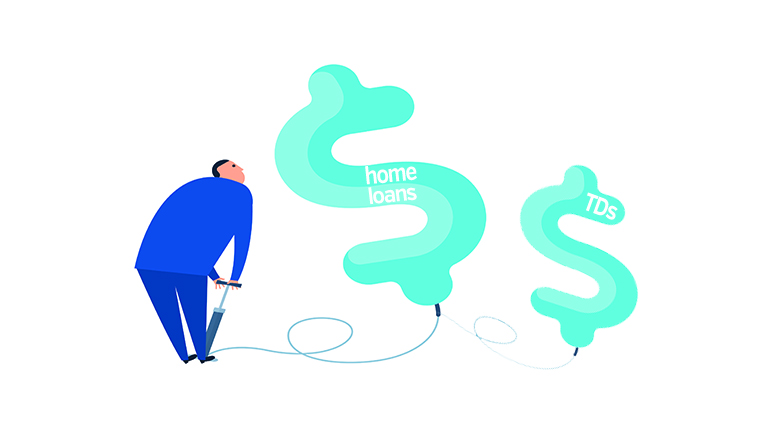 Rising inflation is heightening expectations of higher interest rates, with the Reserve Bank set to review the Official Cash Rate next Wednesday, February 23.

That is moving wholesale interest rates up, which typically moves up home loan rates. And some of that momentum is spilling over to term deposit rates, which have also been moving higher.

On Friday, ASB and BNZ both announced higher term deposit rate offers. They are just the latest in a series of rises from almost all institutions.

But the increases are not huge.

For most of the past 20 years, the difference between a one year fixed mortgage rate and a one year term deposit rate wobbled around between 1.00% and 1.50%.

But between June 2018 and June 2020, that fell below - well below - the bottom of that band. That was a rare occurrence. And it did insulate savers from the fierceness of the period of very low rates.

Currently however, we are at the top of that range.

And as mortgage rates rise, because the public policy work to tame inflation will see official rates rise, it is reasonable to expect more commensurate rises in term deposit rates.

Even though we are in a period of 'financial repression' (that is, savings returns are less than inflation), for term deposit savers it will always be better to get a higher rate than not, to minimise the pressure on their nest-egg. Savers will hope the Reserve Bank can win its battle with inflation because inflation is a thief of savings. Some short term pain will be the cost as almost all savers are aware. But it will be much worse if the Reserve Bank doesn't succeed in taming inflation.

An easy way to work out how much extra you can earn by switching is to use our full function deposit calculator. We have included it at the foot of this article. That will not only give you an after-tax result, you can tweak it for the added benefits of Term PIEs as well. It is better you have that extra interest than the bank.

Do not invest in longer term deposits to finance the parasitic housing Ponzi.

If you want to invest in term deposits, invest short. Later on, interest rates are going to be much higher - and they will stay higher. Trust the clear signals raised by the swap rates, not the wishful thinking of self-serving specuvestors who claim that interest rates will go back down. They will be in for a nasty shock.

Do not invest in longer term deposits to finance the parasitic housing Ponzi.

Good call, I have personally started last year to pull out my bank capital as a form of protest.

yes the savings account rates are all under 0.65%, less than the OCR. The banks are trying to herd people into term deposits starting with a 2.

Banks will put it on capital requirements and current risk models.

Bank shares will give a better return with an implicit guarantee of no bank runs ever- they're absolutely creaming it at the moment.

"Savers will hope the Reserve Bank can win its battle with inflation because inflation is a thief of savings."

Is the reserve bank even fighting it?

Hope. All that stolen language from physics; engine, driver, supercharge - but really, we're down to hope.

Central Bank cannot solve the problem, David. As you should know by now. And trying to assert that we're within 'normal' parameters' is invalid without overlaying debt. to my way of thinking, there was 100T of debt post-2008, there's 300T now, upon a planet 10 year's worth of depletion worse off.

The only interest rate that even theoretically accommodated repayment in that scenario, was an increasingly negative one. This drive to up interest rates to somehow solve a scarcity issue - an ultimate scarcity issue - cannot work. It will disenfranchise the poor/owing first, but it cannot solve the predicament.

It wasn't really a tool-box either, though, was it?

Not going to complain about the recent gains. Was on a 12 month TD at 1.00% at the ASB, now the BNZ looks likely to get my money at 2.5% in a weeks time unless ASB lifts its game. TD rates in 12 months will be starting with a 3 or 4

As I pointed out above, it's just irredeemable numbers now. So what are you gaining?

Can't be a real (vs things buyable) gain. So it must be vs everyone else - kinda like being one deck higher on the Titanic, in relative terms.

Is that really worth doing? I'd be turning my 'cash' into future-required stuff while it's presently available; surely a better potential?

You may be right one day PDK but your to early mate by about 30 years. The numbers are working just fine for now and the future is stuffed regardless, no point even trying to change the direction of the human race, its a lost cause. When I see the end is in sight I will be taking Brocks advice and spend it all on hookers and Blo, will be in my 70's or 80's by then so that will defiantly finish me off.

the return is less than CPI and real inflation in a big way. You are losing money. Even hookers and blow are putting the cost up far far more than the rates of term deposit return. You are effectively paying a bank to hold your money for you.

When you get to the stage in life you have more money than you need you simply don't care. Inflation is having no impact on me, so my saving went down a bit in "Real Terms" I really don't care, its irrelevant if you look at the big picture.

Same.  I left the ASB for the SBS.  Customers need to shop around as TD rates are still too low.

Ditto. Wpac for Kiwibonds. Yes, marginally worse off but I don’t like being dicked around. A subsequent call from the bank asking why we’d removed funds was answered with a direct response. Ie your TD rates suck, there is no Gov guarantee on TDs and your obscene profits via residential property do my head in. Felt good to vent

the return is less than CPI and real inflation in a big way. You are losing money and marveling that the cliff fall is slowed by air friction.