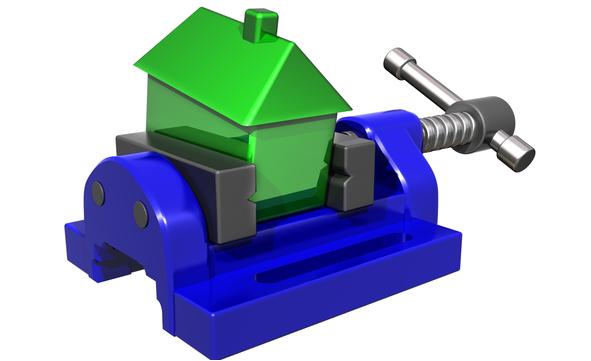 Banks' high loan-to-value ratio (LVR) residential mortgage lending has continued to fade away to virtually nothing, making up just 4.7% of new mortgage commitments in December.

As of October 1, according to new Reserve Bank rules, all banks were limited to committing no more than 10% of their new lending to mortgages exceeding 80% of the value of the property being bought.

New figures from the RBNZ just released show that the banks are more than keeping under the 10% "speed limit".

The latest figure of 4.7% of high-LVR lending compares with over 25% in September, the last month before the speed limit took effect.

In December there was a total commitment of new mortgage lending by the banks of $4.509 billion.

Some $42 million worth of mortgages for loans above 80% but exempt from the new rules were also advanced.

In total the banks' share of high-LVR lending before exemptions was 5.6% and 4.7% after exemptions.

The latest figures compare with high-LVR figures of 7% before exemptions and 5.8% after exemptions in November.

And those figures compared with 12.7% (before exemptions) and 11.7% (after exemptions) for October.

The figures as of yet do not include the more recently announced exemption on new builds, which is being applied retrospectively to October 1. Therefore it can be expected that the current LVR figures being produced by the banks will ultimately show even smaller percentages of high LVR loans once the new build exemptions are retrospectively incorporated.

When the RBNZ announced last August that it was introducing the LVR speed limit from October 1, this was in response to figures showing that some banks were rapidly increasing the proportion of high-LVR lending on new commitments.

The RBNZ was concerned about a potential risk to financial stability that could occur from a sudden shock to the housing market.

First home buyers are those seen as most effected by the LVR restrictions the Government was known to have wanted to have first-time buyer exempted, but the RBNZ was not keen on exemptions. However, it subsequently relented on exemptions for new builds.

Exempted lending categories include lending made under Housing New Zealand’s Welcome Home Loans scheme, refinancing of an existing high-LVR loan, bridging finance or the ‘porting’ of a high-LVR loan between properties.

The latest figures released by the RBNZ should not be construed as indicating where the banks actually stand at the moment in respect to the overall speed limit - though they give some indication.

The RBNZ says that banks’ compliance with the high-LVR speed limit will initially be measured against the average high-LVR share after exemptions figures taken from October 1, 2013 to March 31, 2014. Thereafter, it will be measured against the 3-month rolling average for the larger banks (ANZ, ASB, BNZ, Kiwibank and Westpac) and the 6-month rolling average for the smaller banks.

Clearly at the moment the banks are taking no chances that they will exceed the 10% speed limit when the first overall calculation of it is made after March 31.

So there you have it.
The needy are locked out of the market while the rest if us enjoy rising prices.
It is indeed a windfall for landlords and investors for which we wiill be forever grateful.

...I suspect you are the type who believe that repeating something mantra like will make it all hold true. Otherwise i don't know why you bother repeating yourself so incessantly.

House prices fell in Auckland last month - did you enjoy that?

Interesting that last few years there has indeed been a drop at the end of the year.

This is at a national level, does it hold for auckland?  Unfortunetly i can't find any REINZ auckland data on their site, except for a table that only goes back 12 months.

It's working as planned. Credit growth is slowing and house prices will be next. In the long run FHBs will enjoy more realistic prices. Well done RBNZ.

These comments = FAIL
There are more than enough investors, returning kiwis and immigrants to fill the gap left by low equity borrowers.
Hence the poor get poorer as they are again left out of the virtuous cycle of an economic upswing.
SK

Sales volumes suggest they haven't picked up the slack so far. Time will tell.

Listen you  Morons, nothing has changed in the past 100 years .... nothing .
We have all had to save for our first home , and now the instant gratification generation expect it to be different .
There have been times when its been harder than it is now , times when you could not get a mortgage .... at all
So get real , home owenrship is not a right , it  has always been a hard slog of saving and making choices , at the expense of the alternative choices.
It will never be "easy as" unless Mom and Dad help or you win  the jackpot .

Brain cellular deficient is acceptable ..... as is cranially cro-magnon , neanderthal , or trodlodyte ....

Wow, you seem angry.
Something has changed in the last 100 years. Kiwis are now facing 7-8 income multiples to put a roof over their heads. Nobody expects easy, but for a lot of people home ownership is now impossible. What's really awful about this situation, is that there is NO good reason for this - New Zealand has plenty of land, plenty of money and plenty of demand.

So 100 years ago a typical family had to move out of the city they grew up in to afford a house?  I don't think so, those 3 times median multiples held in Auckland too.

Exactly, the "go elsewhere" argument is weak. We can fix the problem here, in Auckland and make it a bigger, better city.

Fantastic comment.
This should be mandatory reading for all "in my day.. blah blah" boomers.

Actually rjf, in my day we didn't go an do an OE and set back or delay our careers (in some cases) and spend money rather than save (in some cases) so it's even longer and tougher for you poor non baby boomers than he works out in his calculations ?

Eh?  I saved far more money towards my house deposit by working overseas on my OE than i would have if i stayed living here in one of the most expensive places on earth.

Yes and good for you Dtcarter that's why I said (in some cases). But I know plenty of individuals, as no doubt you do, who basically bummed around Europe for 2-3 years and did exactly what I said. They have come back to NZ with a great experience, but no money, and a career not even started, and no assets.  Yes that's really tough on them because they now want the house as well.

That's the trouble, with enough repetition you believe anything, you couldn't possibly have been there yourself - not first hand knowledge that's for sure - taxation 66%

I'd like to know where you get this crap from

Have you ever taken the time or trouble to go and do your research and consult the elderhood?

That's the trouble, with enough repetition you believe anything, you couldn't possibly have been there yourself - not first hand knowledge that's for sure - you already owned your house and have no idea what it is like saving for one nowdays.

I'd like to know where you get this crap from

Have you ever taken the time to read the post you are replying to?  If you had you will notice the income figures he used are disposable income, i.e. after-tax.

That's the trouble with averages

That was the exact year of my family break-up. We had a standard 3 bedroom 120 sqm house in Glenfield, Auckland. Sold for $45,000

I only picked 1979 because it was the earliest date of the C18 data. But thanks for the specific house, because we can ask the related question of how hard is it for people to buy the same house in the past and present (keeping in mind that it was a more desirable than nationally typical house in 1979 and had aged into a below nationally  typical house over the 33 years). It has basically gone from a 3.3 median multiple house in 1979 (somewhat above the national figure) to one that is a 4.8 median multiple house in 2012 (somewhat below typical housing stock). So it has become half again as hard to save the deposit, for a somewhat older house (and less valuable in the sense of selling one house and buying another).
But, as ever it is the compounding interest on the larger mortgage balance for recent prices that really makes the difference, and that is what makes it actually a lot harder than indicated by the deposit time calculation. And this is why it is actually harder for young people these days.

House prices in Auckland fell last month. With interest rates due to climb the housing market fiasco is about to come to an end.

So what's the word among your confrere's .. what's your pipeline into asia telling you? .. NZD has risen strongly over the past year, up at USD $0.83 and AUD $0.95 and you reckon they will still come at the same rate of 90,000 pa? Price no obstacle?

"For many asians they actually do not know the difference between US, Australia or NZ"

What a most ridiculous comment ...... they ALL know the difference all right and as you correctly said, USA is their number one choice ...FULL STOP...then Australia, Canada, UK (in no particular order) then NZ ...and Auckland only.

So if you want to fool yourself and think this "never ending stream" of migrants is going to sustain these rising prices, so be it.

Many of them also know "value" and will not pay top $ for your damp, leaky rathole on a hankerchief size section .......and from what I am hearing, many of the new immigrants are even saying themselves, that the Auckland market is "overpriced".

Second time he has boasted about his  cheap  Fijian holiday......in FEBRUARY.
Bless 'im ;   all excited he is.

That's a strawman boatman.
Why is it you think commenters can't afford a house or don't save? It's much cheaper to rent where we live here in Australia, so we rent.
Yes saving for a house is tough and sacrifices are required but 8x income is appalling and means all of NZs income goes offshore to debt servicing. What a waste.
Why the big reaction from the property investors? Comments above suggest investing in property was never better so relax.

What this actually shows is that lending imstitutions are finally doing what they should have been doing years ago - not frivorously giving money away  to unsuspecting first homeowners who cannot afford it. Well done Banks it appears you have finally got your act together