The West Coast managed to do what the major centres couldn’t and had 'thousands' turn out to register their dislike of Government policies. The GDT continues to improve

Rural News
The West Coast managed to do what the major centres couldn’t and had 'thousands' turn out to register their dislike of Government policies. The GDT continues to improve 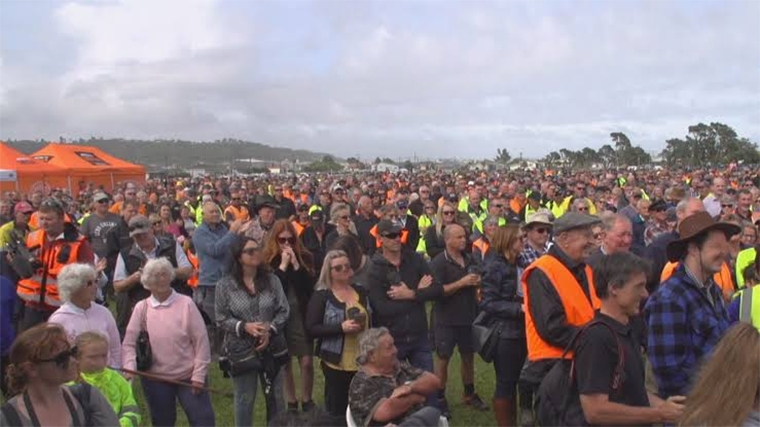 The West Coast managed to do what the major centres couldn’t and had “thousands” turn out on Saturday to register their dislike of the government policies. A couple of things made this protest somewhat unusual.

The protesting crowd was made up of odd bedfellows with farmers, miners and members of the fishing industry forming the majority of the number. The other unusual factor was that it was held in what is traditionally considered to be heartland Labour territory.

The crux of the protest was that people had had enough of not being allowed to make a living from the natural resources.

As at the Wellington rally last week, Government ministers said the protestors had it wrong. Doc Minister Eugenie Sage said that the Coast had received $240 million from this government on top of the $120 million ... 19 years ago in 2000 ... while Local MP Damien O’Connor, who didn’t front, said the group was being “spurred on by misinformation from the Opposition”.

What both protests have highlighted is that people seriously do not like uncertainty, and the Government's drip feeding of polices over the last two years without showing a pathway, benefit or economic evaluations, has created so much uncertainty many of those away from the major centres are now saying 'enough is enough'.

When the Government closed down future oil and gas exploitation and said the country needed to move to more renewable energy sources some on the Coast thought that this might provide the catalyst for more hydro on the West Coast to provide some of this energy. Sadly for them, no. This option was shut down despite the local council believing they had met the environmental test required several potential hydro scheme which may have provided a boost for the West Coast have received the thumbs down. Another irony for the Coast is that despite the pressure to close its coal mines, New Zealand still imports a tad over 600,000 tonnes (2018 figures).

Given that the Government’s response is that these groups have it all wrong, there is unlikely to be many changes. With the voting power residing in the major centres the regions will need to gain more sympathy from a wider audience to gain traction with this Government.

It was perhaps a little ironic that there has been a recently published a story about the bargain homes that can be brought in “dying New Zealand towns”. With over half of New Zealand’s population now residing in cities of over 100,000 residents the decline of smaller towns looks set to continue.

The Government has boosted the powers of the Overseas Investment Act. “The Government is delivering on its promise to protect New Zealanders’ interests by applying a new national interest test to the sales of our most sensitive and high risk assets to overseas buyers.” If land owners thought this might apply to the ease at which foreign investors can access land for forestry it appears they will be disappointed. The focus appears to be on infrastructure such as ports, airport and telecommunications. Water bottling also rated a mention, but not land.

On a more positive note the Global Dairy Trade auction result lifted yet again. Overall the lift was +1.7% with Whole Milk Powder up by +2.2% and Cheddar Cheese which had been on a downward trend doing a small comeback with a +2.5% lift. Butter was the only major product with a negative result, down by -1.3%.

Volumes were down on previous sales and this had a large part to play in the lift.

If the coasters think things would be any better under a different government they're kidding themselves. Unfortunately the region is stuck in something of a timewarp and thinking theres a future in digging coal is indicative of that. On the upside, As the rural broadband initiative gains traction in the region it may surprise the coasters what happens with work and property development opportunities off the back of that. When Cornwall in the UK was chosen as the landing site for a major fibre cable it was because the region was also stuck in a timewarp, long neglected, there has been quite a transformation off that one initiative since then.

I take it you don't use any steel products, like buses, trains, aeroplanes or cars, to name a few.

To say there's no future in coal mining is the very definition of ignorance and why it's sadly not worth taking most of the loud greenies in this country seriously.

Are you trying to tell me there is no steel anywhere that isn't smelted using non coal fired energy sources?

I'm trying to tell you that steel is principally made from smelting iron with coal. If you don't know that you shouldn't be commenting on this subject, period.

All thats says to me is that you most likely are a coal industry lobbyist....

This is getting embarrassing. You can't possibly be serious. Go to Wikipedia, type in "steel", and stop playing the fool.

'Global steel production is dependent on coal. Over 71% of the steel produced today uses coal. Metallurgical coal – or coking coal – is a vital ingredient in the steel making process.' https://www.worldcoal.org/coal/uses-coal/how-steel-produced

Have you got any evidence where steel is produced at a commercial level without coal?

Yeah just learn to code you stuck in something of a timewarp thinkers.

Btw using this site on Android tablet is horrible since your reformat of the site, the changing advert tiles affect the stability of the viewable page, it changes all the time. Might want to take a look at it from a users perspective...

Not just android. iOS is horrific too. You get about 3 mins reading time before the webpage produces an error and you’re forced to refresh. Please interest, look into your site’s compatibility with mobile browsers - there is something very wrong.

Might have been coded by a west coaster starting out fresh in tech?

Unless of course you have a monopoly...

We export more coal than we import, so to say we import 600k tonnes is misleading. The imported coal mostly goes to Huntly power station, it would never be economic to transport west coast coal to Huntly, never has been.

One thing the West Coast has plenty of is fresh water (perhaps my understatement of the year ), and ways to utilize that better would Crops that require a lot of water for e,g, though I think most that do also require sub tropical / tropical temperatures.