China’s recently announced change from a one-child to a two-child policy has led to considerable media comment, including from our own Prime Minister at the New Zealand China Business Summit on 9 November. The media focus has been on the demand this will create for infant formula.  However, much of the commentary has lacked an understanding of China’s demographics.

Relaxation of the one-child policy will lead to a short term increase in birth rate but it will only be short term. The reason for this is that the number of women in the child-bearing ages is about to decrease drastically.

The best way to understand the situation is to have a look at China’s so-called population pyramid, reprinted here from Wikipedia under a creative commons licence. This pyramid is constructed from the latest China Census in 2010. As such, the ages of everyone in 2015 are another five years from what is shown here. 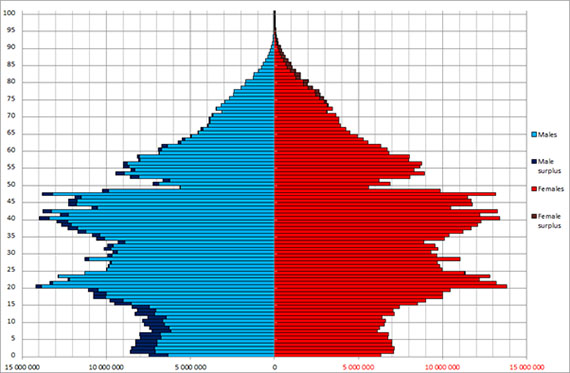 China’s population pyramid as at the 2010 census

To understand the graph – which has unique features compared to any other country – we need to go back in history to the founding of the Chinese People’s Republic in 1949.  The reason for this is that ‘echo’ effects of what was happening then can be seen right through to the present.

Following decades of internal turmoil, China achieved a level of internal stability throughout much of the 1950s and the population soared. At that time, Chinese women typically gave birth to between five and six children over their child-bearing lives.

Things changed drastically in 1959 with comprehensive drought and also linked to the failures of the so-called ‘Great Leap Forward’.  In the three years from 1959 through 1961, births only averaged 15 million per year compared to about 20 million in the preceding years. In the worst year of 1961, there were less than 12 million births.  This shows up right through to the present, with a markedly reduced number of people in the 2010 population pyramid aged 49 to 51 (i.e. currently aged 54-56).

Once China got over the drought and what could now be termed the ‘great leap backwards’, births surged to almost 30 million in 1963. From there on, births declined steadily through to 1979 at just over 17 million per annum.

The declining birth rate post 1963 was predominantly a function of Chinese women deciding to have a lot less children, which has been a phenomenon common to most developing and developed countries. Although this decline was occurring well before China’s one-child policy (implemented in 1979), there was definitely, from the mid-sixties, a set of Government policies to encourage these changes.

In amongst all of this there was one year when births were considerably lower than other times. This was in 1966, a year of disruption from the Cultural Revolution, when people had other things on their minds rather than making babies.

When I first went to China in 1973, we were shown clear evidence of programs encouraging use of contraceptives and also encouraging couples to delay marriage. I also recall having discussions with one of our interpreters - a young lady in her early twenties - about the large number of unmarried mothers in Western societies. She could not understand how this could be biologically possible, no doubt based on her own experiences where unmarried folk never had the opportunity to be alone.

The one-child policy was implemented in 1979 but in fact had no observable effect on the overall number of births. Indeed births actually increased in the years thereafter.

This paradoxical situation was because the huge cohort of women born in the 1950s was now coming through to child-bearing age. Any reduction in births per mother was more than compensated by the large number of potential mothers.

So births increased again through the 1980s to reach a maximum of 25 million in 1987. From there it decreased steadily to some 15.9 million in 2010. (The population pyramid shows even less than this for 2010 births, but this is probably because the 2010 national census was taken at 1 November, and so two months were still to come.)

Since then, from other Chinese data we know that birth numbers have increased slightly to an estimated 16.8 million in 2014.  This increase is mainly due to progressive relaxation of the one-child policy. First, it was couples who were themselves both from one-child families who were allowed a second child. Then, it was couples where only one of them was from a one-child family. And now it will be everyone who can have two children.

When policies such as these are relaxed then the immediate effect is to release a pent-up baby demand. There will be lots of couples in their thirties who will say let’s get on and have the second child before nature gets in the way. However, that pent-up demand only lasts for a couple of years before it settles down again.

Looking back, one can see how the one-child policy, although abhorred in Western countries, was important in bringing China’s population under control. However, with hindsight there is now a strong argument that it should have been relaxed many years ago. Already China’s working age population is in decline, with more people retiring than entering the workforce. That will increase over the next ten years even if China raises the retirement age.

The reason that the uptick in births over the next few years will be short term is because the number of women coming through into child-bearing age over the next 20 years will average less than eight million per year. Each of these women would need to have more than two children just to maintain births at the current level.

In contrast, the current evidence is that many Chinese women do not want two children. So unless there are considerable changes in societal attitudes, birth numbers will, by 2020, be declining again.

There are also considerable regional differences to be considered. For example, according to Wikipedia, the 2010 census reported a total fertility rate (TFR) of 1.18 (0.88 in cities, 1.15 in townships, and 1.44 in rural areas).  This fertility rate measures the average number of children per woman. The five regions with the lowest fertility were Beijing (0.71), Shanghai (0.74), Liaoning (0.74) Heilongjiang (0.75) and Jilin (0.76). Apart from Shanghai, these are all in the north. The provinces with the highest fertility rates were Guangxi and Guizhou, both poor southern provinces, with 1.79 and 1.75 respectively. The county with the highest birth rate was Baqing County in Tibet with 5.47.

These differences illustrate a point I often try to make: there are many ‘Chinas’. Policies are often implemented pragmatically across the nation. Also, ethnic minorities were always exempt. And there is also the old Chinese proverb that ‘the sky is high and the emperor is far away’.

One of the remarkable features of Chinese births is the high proportion of males, currently about 18 percent more than females. The natural birth ratio should be about four percent more males at birth. The difference from the natural rate is primarily due to selective aborting of female foetuses based on ultra-sound. (In the population pyramid, the ‘excess’ males show as very dark blue).

The natural difference in birth rates between the sexes has minimal importance in growing populations where men typically marry women who are several years younger.  But where population rates are falling, and combined with selective abortion of female foetuses, the effects are profound.

So over the next 20 years there are going to be 20 million Chinese men coming through to adulthood for whom there are no female partners. This is a situation we have never seen anywhere in the world. Will Chinese women be allowed to marry two men?

From New Zealand’s perspective, and recognising China as inevitably our most important trading partner of the future, the big message from the population pyramid relates more to older folk than to babies. Over the next ten years there will be a huge surge in the 55 year plus age bracket. So it is tourism and old-age products rather than infant formula where the big change will occur.

Keith Woodford is Honorary Professor of Agri-Food Systems at Lincoln University. He combines this with project and consulting work in agri-food systems. Disclosure of interest: Keith’s clients include Calder Stewart who build free-stall barns. His archived writings are available at http://keithwoodford.wordpress.com

The media focus has been on the demand this will create for infant formula.

so for old times
http://www.stuff.co.nz/national/politics/9847806/Chinese-leader-to-visi…