Fed Farmers dairy chairman admits NZ dairy farmers are among the world's most indebted, says the effects of the Brexit are up in the air and diverts attention away from nitrogen in the fresh water debate

Fed Farmers dairy chairman admits NZ dairy farmers are among the world's most indebted, says the effects of the Brexit are up in the air and diverts attention away from nitrogen in the fresh water debate 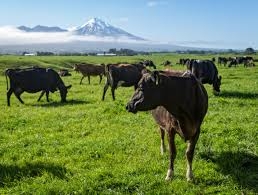 Federated Farmers concedes dairy farmers may need to re-think the amount of debt they take on.

Addressing the Federated Farmers Dairy Industry Group, dairy chairman Andrew Hoggard points out our dairy debt is much higher than that in other countries.

And with a question mark hanging over whether low dairy prices will become the new norm, he says farmers need to consider whether they’re taking on a smart level of debt.

The Reserve Bank's May Financial Stability report reveals how dairy debt has increased to around $40 billion: 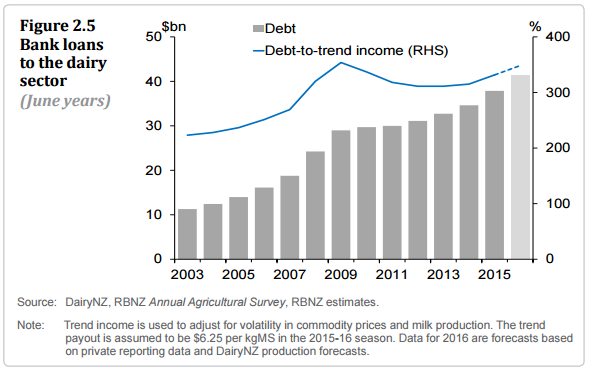 Hoggard explains there are a number of reasons why our dairy farmers are more indebted than those around the world:

“… in many cases farmers in other countries haven’t been able to expand because of regulations, thus they haven’t needed to borrow. Or they have had volatility from other factors, such as weather in Australia, which means they have a mind-set around managing that and carry less debt.

“Whether it’s a conscious decision or just an inbuilt setting that no one has considered and just occurs, I can’t tell you. But the facts are they have less debt.

“We have been able to handle higher debt levels, simply because returns have been good, our weather by-and-large is okay. It allows us to take more risk in other parts of our business.

“Is this current downturn just a blip, or are we entering a new period? Things might look slightly different than the last decade and our risk profile might be slightly different than the last decade. Will this mean we need to re-evaluate what a smart level of debt is? I doubt we will get all the answers to that question this afternoon, but these are the questions farmers should be asking themselves going forward.”

Effects of the Brexit on dairy up in the air

As for the effect of the Brexit on New Zealand’s dairy industry, Hoggard says:

“It really is all up in the air at the moment, our exports presently to the UK are pretty minimal. Whilst we have quota, the tariff rates do make it uncompetitive against cheaper imports from Ireland and the Netherlands.

“If we are able to quickly organise trading terms with the UK that are at the same level as the EU, then we certainly have good opportunity. Under WTO rules existing agreed access can’t be downgraded.

“However on the downside, we have now just lost an ally around the EU table in negotiating a free trade deal with the EU. With all the global uncertainty this may have a negative impact on global demand.

“The economic fallout is interesting because it really does show the impact caused by trade barriers.

“All this panic is being caused by the fact the UK is now leaving the free trade area of the EU. It is not because they are leaving behind all the red tape, bureaucracy, regulations, various common policies, and the fact you will now need to have your passport stamped going between the UK and the rest of Europe.

“Let’s face it if we had of had more effort globally at the WTO, and had a better setting globally for trade, would this be such a big deal? One hope that I have is this will result in more focus on the WTO, which can only be good for us.”

Nitrogen not to blame for making our waterways un-swimmable

Commenting on the debate around making our waterways “swimmable”, Hoggard says some of the heat needs to be taken off dairy farm irrigation systems being at the root of the problem.

“My assumption is the key thing around swimmable would be that it is physically safe to swim in a waterway and not get sick. So surely that is E-Coli we need to be focusing on in that regard? Other factors might be water clarity.

“However, the way the discussion goes one thinks that we are all going to die from nitrogen poisoning.”

Hoggard says that according to the Land Air Water Aotearoa website, water becomes unsafe to drink if its levels of nitrogen exceed 10 – 11 mg/l.

And the Mangatainoka River, which is said to be among the 25% of New Zealand waterways with the highest levels of nitrogen, only has a level of 0.825 mg/l.

“In fact, given that Evian drinking water has a level of 0.8535, I think it’s a fair assumption that the main risk to your health in New Zealand waterways will not be from nitrogen,” Hoggard says.

As for E-Coli, he says: “Again using the LAWA website, it shows me that E-Coli counts up to 260 cfu per 100ml as acceptable for contact recreation, counts from 260 – 550 it is an alert, and counts over 550 that is an action level. That is when the health authorities put a sign up saying swimming or collecting shellfish is not recommended.”

Of the 51 monitoring sites around the Manawatu River, Hoggard says only one has a count of over 550, and this site is situated next to the Woodville sewage treatment plant.

“But that doesn’t mean that we can sit back and do nothing, as just because the average is a certain number, you do get peaks when the levels are definitely unsafe and we need to take care of that, so by all means if we as communities want really high standards then let’s do that.

“But let’s focus firstly on properly deciding what swimmable means. What are the scientific numbers that we need? How do we properly understand what work is actually required to get to a certain standard?

“…Another question is when do we measure? If E-Coli levels are really high during a flood in winter, do we get stressed out that someone might get a stomach bug from going swimming during a flood?”

Hoggard says better data needs to be collected around the quality of our waterways.

“The government needs to ensure that the LAWA initiative gets the funding it needs, so that the people of New Zealand can go to this site and see the data for themselves. Have it explained in clear terms what that data means.

“…Without this context nationally or internationally data could give a false impression at first glance. For example being in the worst 25 percent of players wearing an All Black jersey still makes you in the top 99.99 percent of rugby players in the world.”

we also need to look at who is collecting the water data and if agendas are being pushed.

One Million cow's poop is equivalent to 20 million human's poop - Nitorgen, BOD, Total coliforms. We have 5 M cows (about) so equivalent to the poop from 100 million people not being treated. Is it any wonder that some is ending up polluting our natural waterways. Sort your poop out farmers! Keep it out of the ground water and surface water.
The focus of councils has been on freedom campers - hmmmm......

birds poop on our houses that finds it's way into our rain water tanks that many of us drink every day, we swim in the sea that millions of fish poop in, a mountain stream with bird, deer, eel, opposum poop in it, but that's all natural wonderful and good. But cow poop is different it has regulatory jobs that depend on it. Water testing needs to be fair and indepedently done, not by people who's jobs rely on finding certain outcomes.

What are they supposed to do about the debt, pay it down out of income? The debt was taken on with an assumption of tax free capital gains, paying capital back and the tax implications were never thought through. Falling land values would make an exit impossible, which is what must be focusing the banks attention.

Now its going to erode their equity not be a tax free capital gain, they should've cashed it in as now dropping